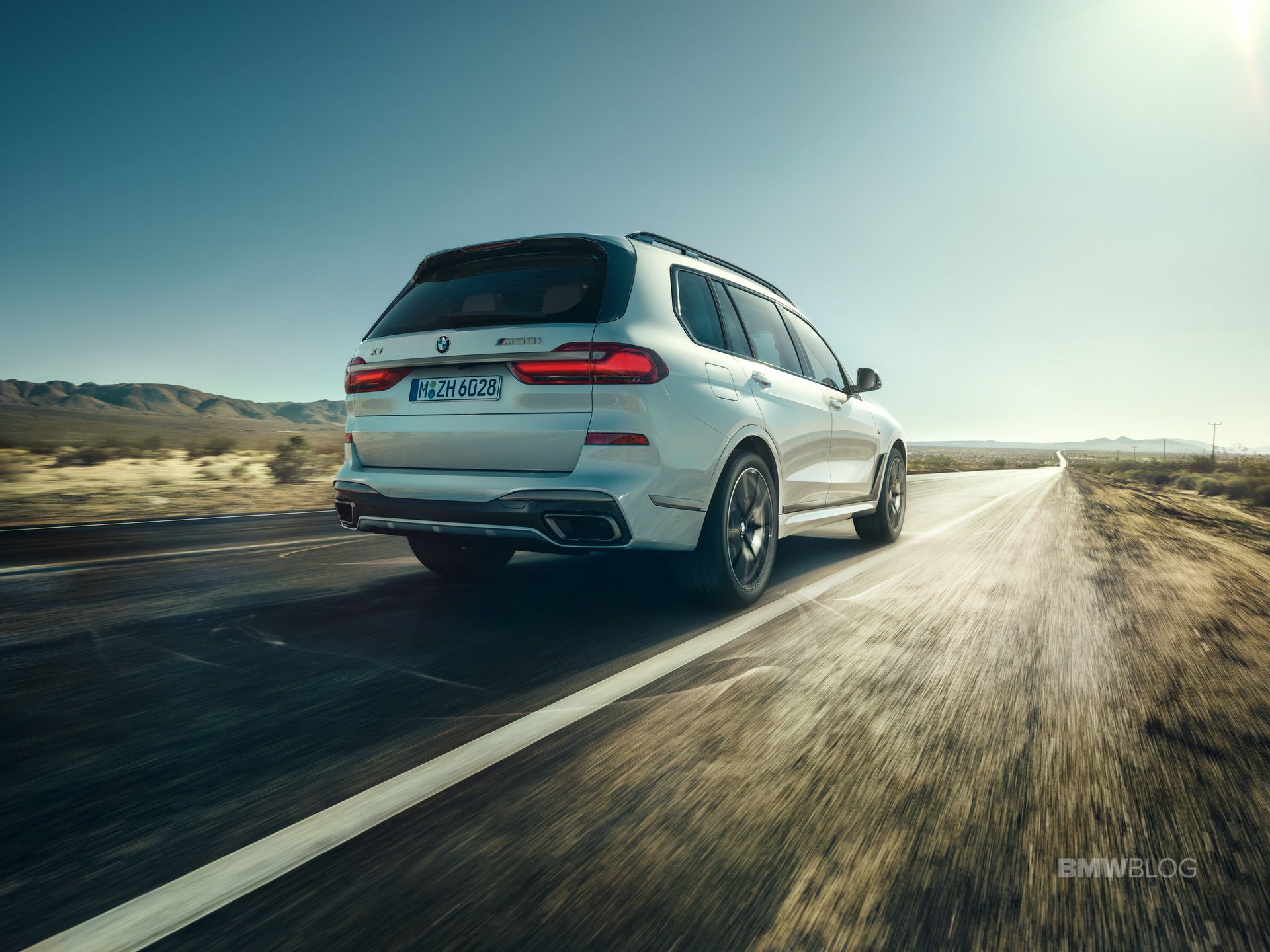 There isn’t going to be a proper BMW X7 M. The M Division has already stated as such. The X7 is just too big, luxurious and heavy to warrant a proper M variant. However, X7 fans that are wanting for more power, don’t fret because more grunt is on the way in the form of the BMW X7 M50i.

It seems as if the top-dog M Performance engine is making its way down the line. The newly revised N63 4.4 liter twin-turbocharged V8 started life in the BMW M850i and has been making its way into other M Performance models. The BMW X7 M50i is one of the latest to get it. 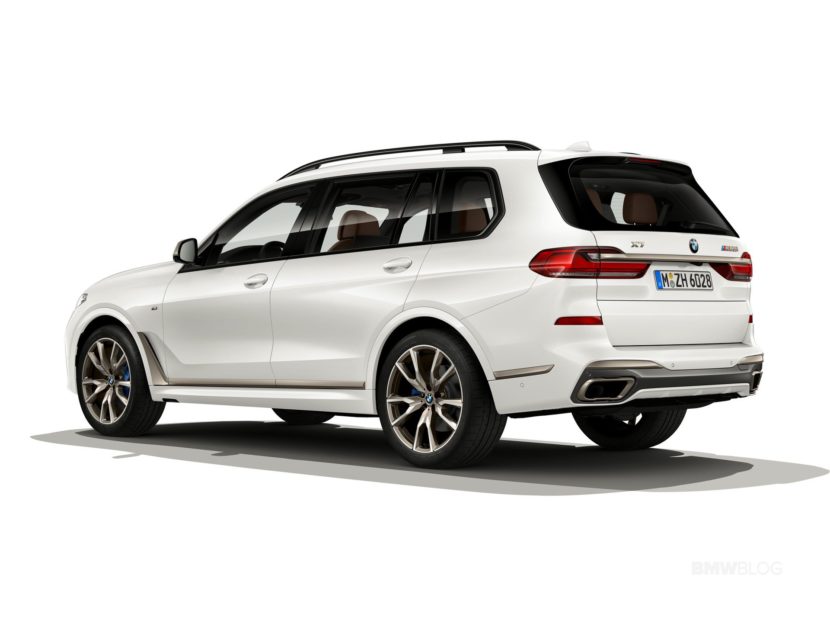 That means the big X7 will get a whopping 523 hp and 553 lb-ft of torque. The latter of which is available at an astonishing 1,800 rpm. That power helps the BMW X7 M50i accelerate from 0-60 mph in 4.5 seconds. That’s stupid fast in an SUV that weighs as much as a medium-sized mountain. Top speed is limited to — you guessed it — 155 mph when equipped with summer tires (130 mph with all-season tires).

All of that power is sent through an eight-speed auto and xDrive all-wheel drive, of course. The major difference in the drivetrain is the as-standard M Sport rear differential, which will help with cornering grip and stability, something that will likely be very welcome in something as tall and heavy as the X7. 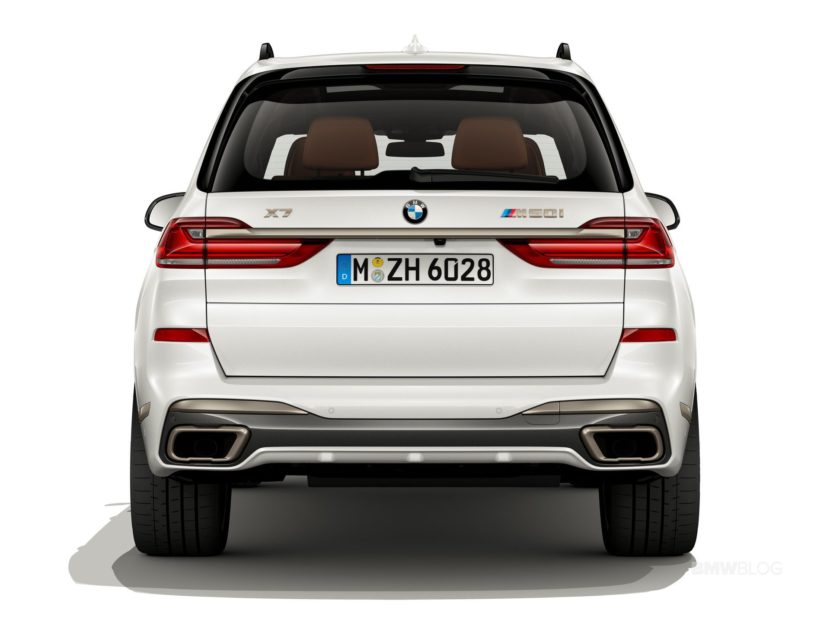 While the suspension setup isn’t much different than the standard X7 on paper — double wishbone up front and five-link out back — it’s been thoroughly revised by the M Division. So while it might not be a full-blown M car, there are some M Division fingerprints in certain places.

Adaptive, two-axle air-suspension is as-standard on the BMW X7 M50i and it’s capable of lowering the car 0.8-inches in Sport mode or when speed exceeds 85 mph. It can also raise the ride height up 1.6-inches for better ground clearance. Though, don’t expect to go tackling Moab.

M Sport brakes are as-standard, obviously, and they’re going to be needed to bring all of that mass to a halt. Those large brakes hide under simply massive 22-inch wheels wrapped in 275/40/R22 tires. Performance run-flat tires are as-standard. 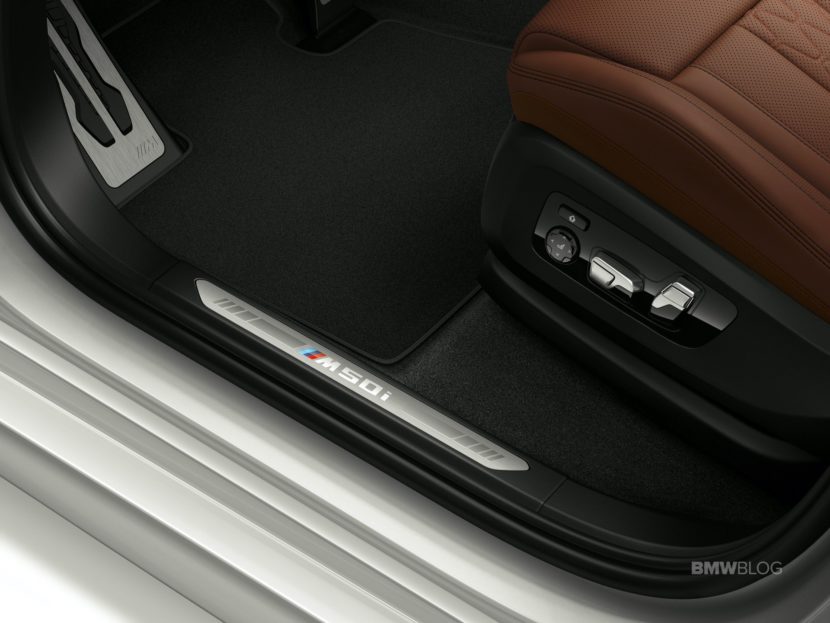 In terms of looks, it’s pretty standard M Performance styling. It gets a sportier front bumper and more aggressive front air intakes. Grey and gloss black trim adorn the exterior of the car, giving it a sportier, more aggressive look. Inside, a three-spoke M steering wheel with M-colored stitching sits front and center, with sportier looking seats and an Alcantara headliner completing the sporty look.

Aside from those sporty bits and the new monster engine, the BMW X7 M50i is pretty much just like every other X7. It’s supremely luxurious, comes with three rows of seats and is very expensive. The X7 M50i starts life at $99,600 plus a $995 destination fee. So you’re over six figures before adding a single option and/or dealer fees.

At first, we weren’t so sure the BMW X7 M50i made much sense. It only has 67 hp and 74 lb-ft more than the regular X7 xDrive50i. Will it handle better? Sure. But not by much. It’s a nearly 6,000 lb SUV, handling isn’t its raison d’etre (crappy french accent implied), no matter how many M badges it wears. Though, we now realize it isn’t much more expensive than the ’50i, which starts at $92,600. So for just $7k more, you get the same monster engine as the M850i, a sportier rear differential, cooler looks and bragging rights. Now, it seems like it makes much more sense.