The BMW 2002 is an iconic car for the Bavarian brand because it essentially created the 3 Series, BMW’s most famous and popular car. Not only is the 2002 an important part of the brand’s history, it’s also a popular enthusiast’s car and one that a lot of enthusiasts tune and modify. However, no one has ever modified a 2002 like this.

With what is possibly the most extreme BMW 2002 build of all time, the mad geniuses at Gruppe5 have outdone themselves. 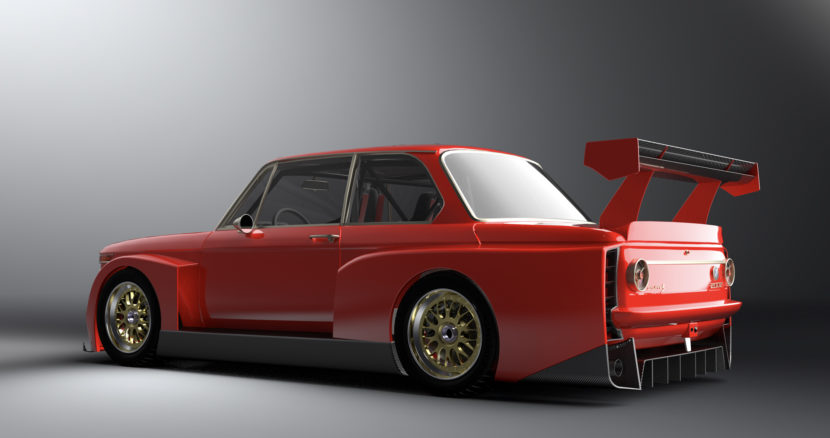 Underneath its highly modified 2002 body lies a completely rebuilt and redesigned 2002 chassis that’s been given carbon fiber and steel to make it lighter than before. On top of that rebuilt chassis is a heavily modified BMW 2002 body that features an extreme amount of carbon fiber aerodynamics. Apparently, it can produce 1.1 metric tons of downforce and it will weigh under one metric ton. Dear lord.

The craziest part, though, is its engine. Instead of the old 2.0 liter four-cylinder engine, this modified BMW 2002 will sport a heavily modified S85 V10. It comes in two flavors, both of which are enlarged from the standard S85: 5.8 liters or 5.9 liters. The former makes 734bhp and the latter makes a whopping 792bhp. That’s 800 hp by BMWBLOG maths in a car that weighs a lot less than a Mazda MX-5. Just reading that boggles the mind. That engine is paired with a six-speed sequential manual gearbox and it should be very, very fast.

The engine is being built by BMWNA race engine builder Steve Dinan and his new company Carbahn Autoworks.

Inside, the Gruppe5 BMW 2002 will sport a full FIA-spec roll cage and new digital gauges. So it won’t feel like a classic 2002 from the inside. Handling cornering duty is pushrod suspension, both front and rear, so it should handle as well as it goes.

Essentially, this is a custom-built, world-destroying monster with a BMW 2002 body on top. The idea of nearly 800 hp, less than 1,000 kg of weight and a modified 2002 body is one that I think we can all get behind.