Not long ago BMW M teased us with a short video showcasing the newly announced BMW M2 Competition doing some stunts inside what looked like a hangar. In that footage we noticed balloons and a laser were used but we couldn’t quite grasp what they were trying to tell us. The BMW people were filming the M2 Competition trying to break a world record that was set by a human, a record that required a heightened sense of agility.

Up until not long ago, the world record for the most balloons popped with a laser in 60 seconds was 63 balloons and was set by Ashrita Furman in New York in 2016. He used his hands and a focusable 2W 450nm blue laser for his record, which was just broken by the BMW M2 Competition, as you’re about to see in the video below. 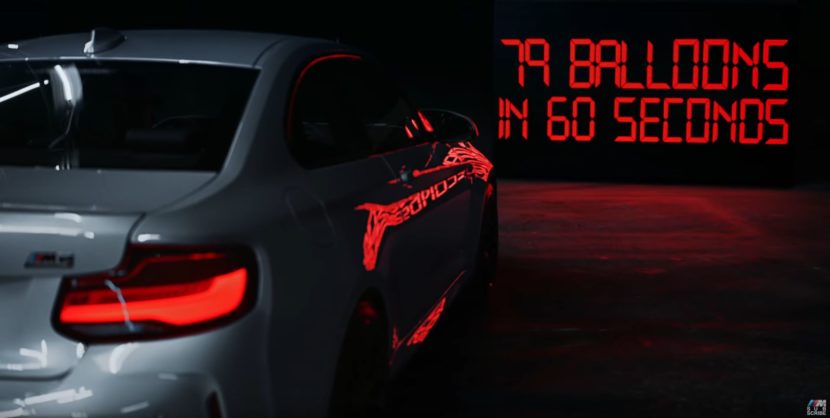 Of course, the technology needed to break this record exists and, as a matter of fact, a  750mW – 1000mW (1W) Spyder III Krypton laser can pop 100 balloons in less than a minute, if they are positioned in a straight line. However, in this scenario, the M2 Competition popped 79 balloons in under 60 seconds, and they were definitely not positioned in a straight line. Instead, the BMW M people created an M logo – stripes included – in which they placed the balloons.

Therefore, this was not only a showcase of speed but also agility, as the car had to be driven round the specially set up track to break the record. In the end, the M2 Competition did it and the 2-minute clip below proves it, even though it has been heavily edited.