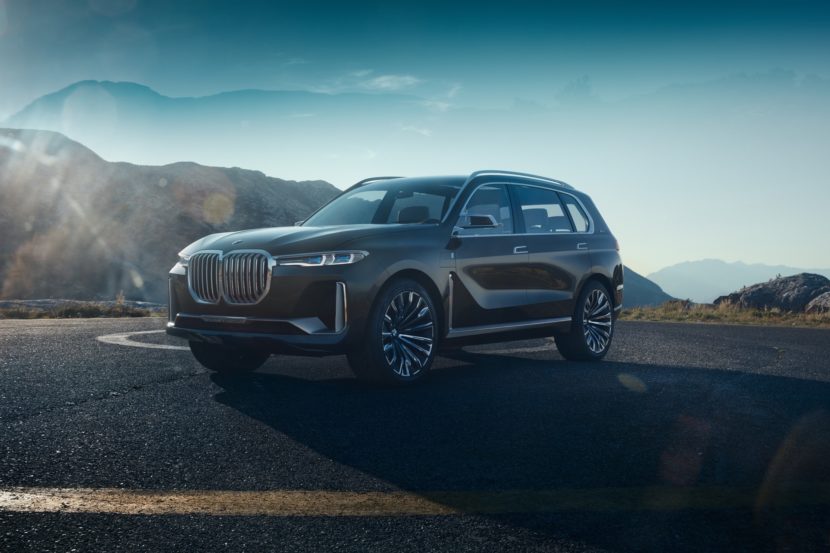 It seems as if BMW is about to launch one of the largest automotive model offenses in history. Just recently, the Bavarians announced that they’d be debuting twelve new EVs by 2025. Now, BMW is about to debut the first of its NUMBER ONE>NEXT strategy cars — the BMW X7 Concept iPerformance.

BMW seems very serious about launching more ultra-premium, high-end luxury cars. We first saw the BMW 8 Series Concept Coupe, a car that will contend with the Mercedes-Benz S-Class Coupe and possibly even other grand-tourers from Aston Martins. Now, the BMW X7 Concept will be the flagship luxury SUV in the Bavarian lineup and it will contend with cars like the Mercedes-Benz GLS-Class and even the Range Rover Autobiography. 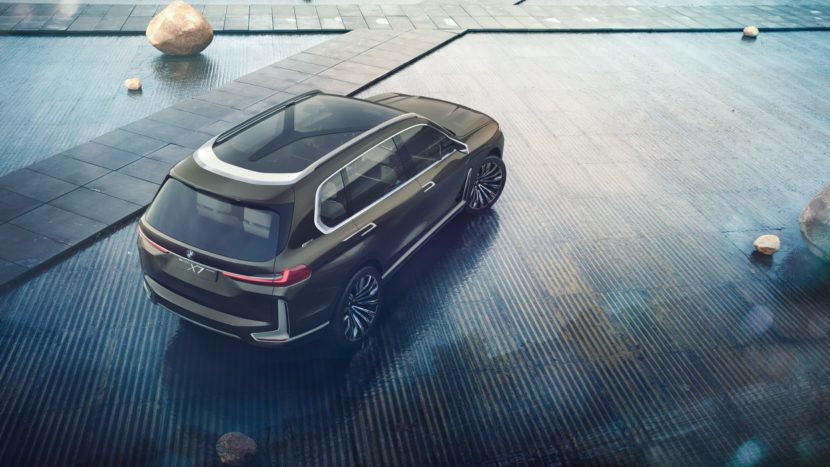 “Since BMW founded the Sports Activity Vehicle segment with the first X5 back in 1999, every subsequent X vehicle has broken new ground. The BMW X7 continues this tradition: the X family’s new top model extends BMW’s offering in the luxury class and redefines the concept of luxury for the BMW brand and beyond. It also embodies one of the most important elements of our corporate strategy NUMBER ONE > NEXT, to grow our presence in the luxury class. Furthermore, the BMW Concept X7 demonstrates it’s perfectly possible to combine a large sports activity vehicle with an electrified drivetrain.” said Member of the BMW AG Management Board responsible for Sales and Brand BMW, Ian Robertson.

In terms of design, the BMW X7 is quite a departure from any of the current design language used on production models. What’s interesting is that it looks similar to the design language used on the BMW 8 Series Concept. The exterior is big, bold and brash, with sharp lines and massive features. Its Kidney Grilles are simply massive, flanked by wide, yet narrow, LED headlights. 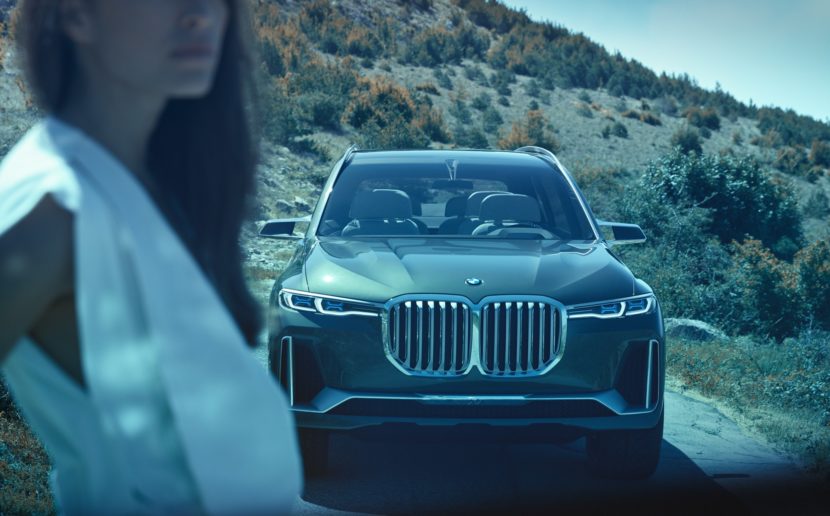 BMW is trying to signify how imposing the new X7 is and seems to be doing so in almost a Rolls Royce sort of way. I mention Rolls Royce because, despite the brash and bold features, there aren’t actually that many body lines or creases. It’s almost, dare I say, minimalist?

“The Concept introduces the BMW Sports Activity Vehicle DNA into the luxury segment. The new BMW design language employs just a few, extremely precise lines and subtle surface-work to raise the bar in terms of presence and prestige,” said Adrian van Hooydonk, Senior Vice President BMW Group Design. “The BMW Concept X7 iPerformance has a luxurious and sophisticated feel to it, thanks to its understated use of forms and incredibly precise details.” 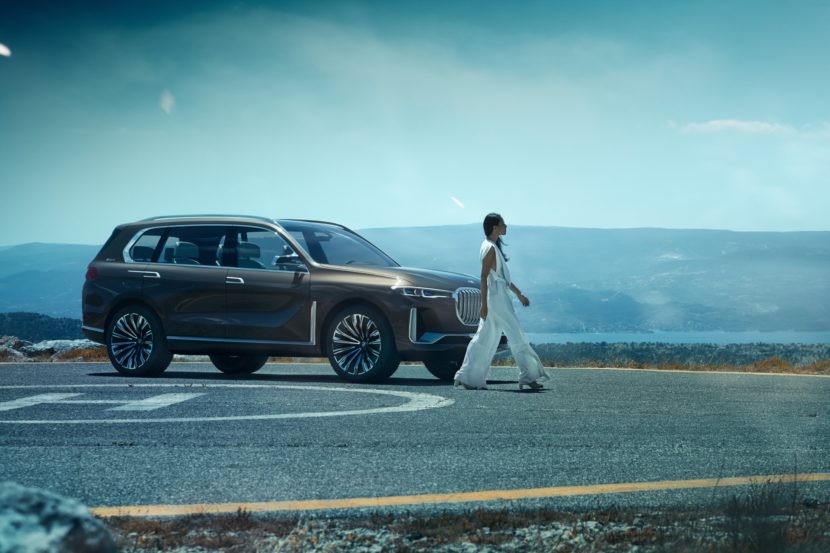 Behind the front passengers, the BMW X7 Concept sports four single captain’s chairs, making it a six-seater in total. This is the way to do three-row luxury, as it allows for more comfort, space and style. Expect the production-ready BMW X7 to have seven-seats as-standard, with the option for six, single seats like the Concept. 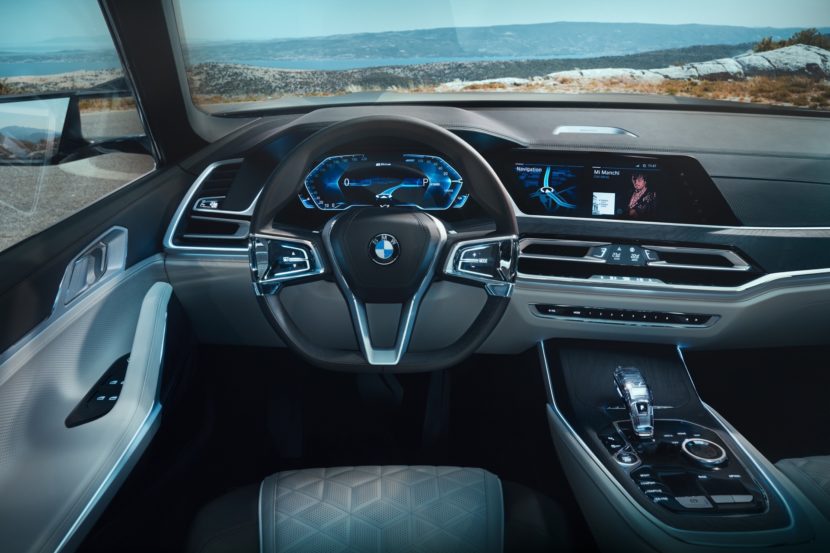 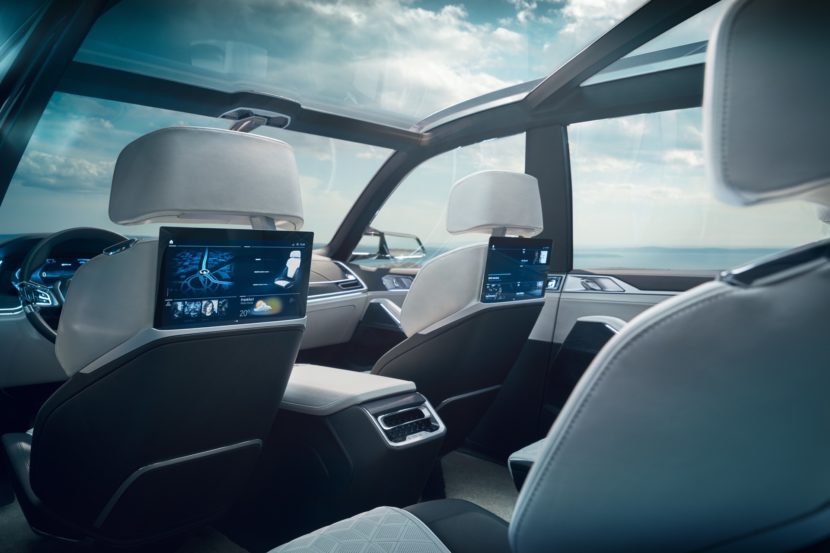 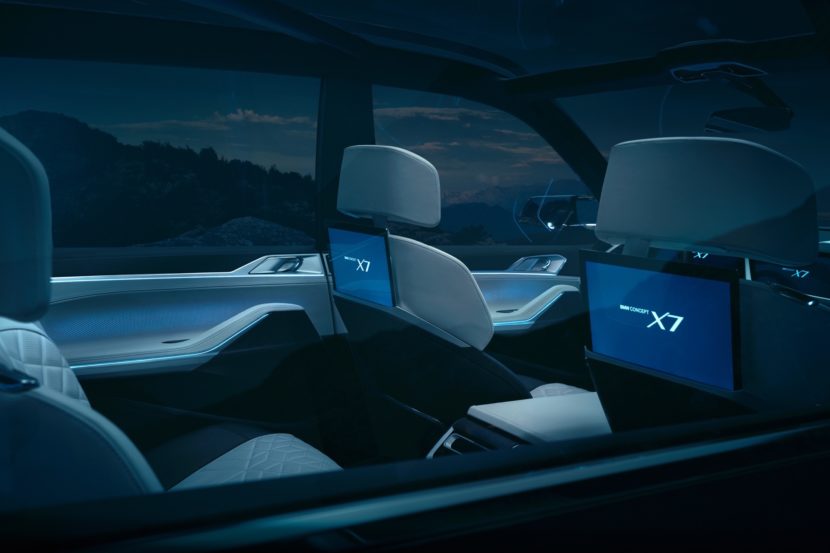 Up until now, the largest BMW SUV you could buy was the X5. With a third row as an option, the X5 was never really a seven-seater, as that optional third row is only big enough for extremely small children or humans who received the Clarkson treatment. So it’s nice to see BMW offering a true, three-row SUV, even if they only provide six seats.

Behind the front seatbacks sit massive screens that provide the second-row passengers with any sort of entertainment they’d like. Now only can they view entertainment but they can share it with other passengers in the car. It’s part of BMW’s vision for integrating passengers’ digital work with the BMW Connected system. So passengers can enjoy their personalized services, music or even work content.

What’s even more interesting is that rear passengers can send their music to the main iDrive system to play it out of the main car’s speaker system or send an interesting article or video to the passenger next to them. Interactive LED choreography via the doors and instrument panel traces the communication flow between the rear screens and the display at the front of the cabin. 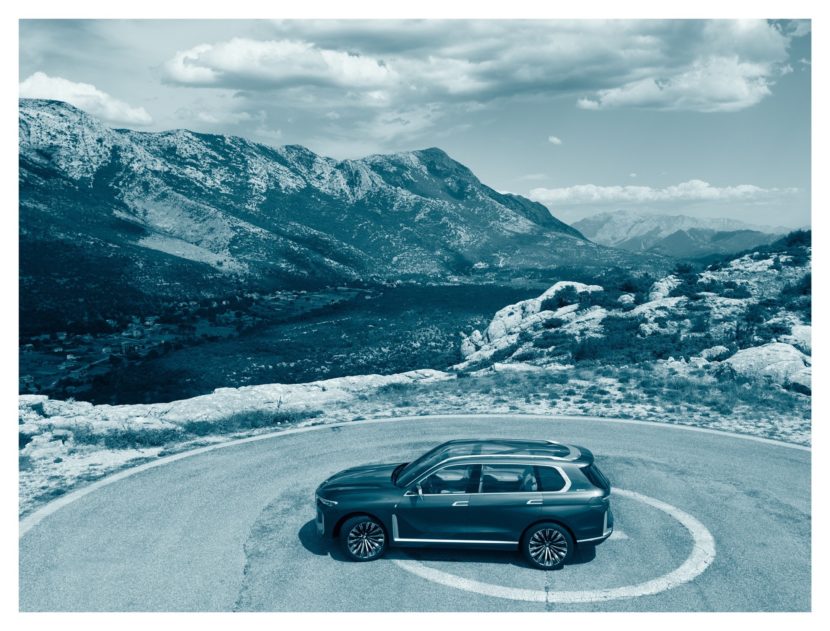 By now, you’ve probably noticed the massive glass roof of the X7 Concept. The glass panoramic roof provides an open-air feeling to all passengers on board, not just the front passengers. While such a roof is not likely to make it to production, it will be interesting to see what kind of panoramic sunroof BMW does give the X7. If it’s getting some sort of Carbon Core chassis, like the 7 Series has, it’s possible it could have a strong enough roof structure to accommodate such a massive glass roof. If it’s possible in the Tesla Model X, it’s possible here. Though, not likely.

This new BMW X7 Concept iPerformance also showcases some of the brand’s plug-in hybrid technology. You can see the charge port on the front, driver’s side fender, showing off that this car is, indeed a hybrid. BMW hasn’t given exact specs of what this X7 Concept iPerformance has under its hood but will say that it has a TwinPower Turbo petrol engine paired with an electric motor. While all of BMW’s iPerformance models use a turbocharged four-cylinder engine, the X7 is so big and heavy, it would be surprising if it used a turbo-six paired with an electric motor. 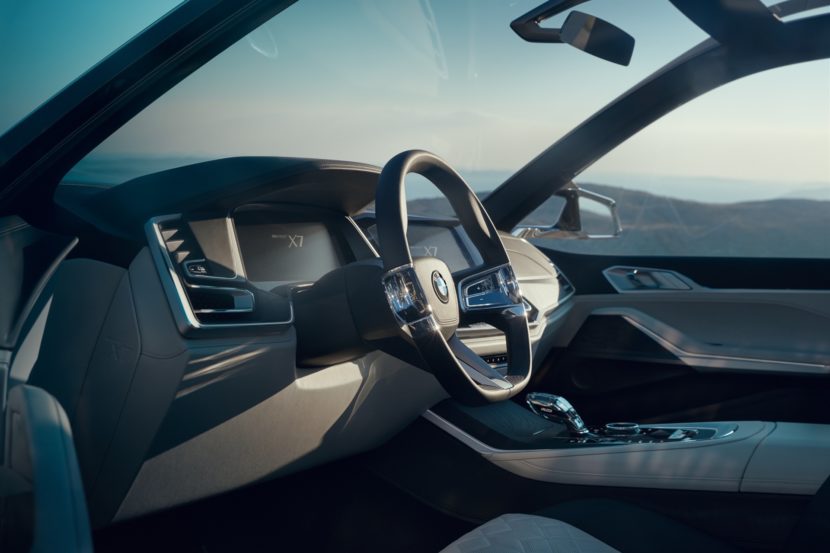 We’ll see this new BMW X7 Concept iPerformance debut at the Frankfurt Motor Show next week and it will be part of a massive showing from BMW. We’re excited to see it in person and get a better feel for the future of BMW’s design, luxury and technology.