Once the new BMW G30 5 Series was launched, the Bavarians celebrated a couple of premieres. This would be the first time a 5 Series was fitted with a Bowers & Wilkins sound system and the 5er would become the second BMW ever to wear the British brand’s logo on its speaker domes, after the 7 Series. A lot of people have just glanced over this bit of news, but now BMW is highlighting it once again with a subtle video published on Youtube.

The Bowers & Wilkins sound system is truly a delight for audiophiles. I’d risk saying it’s the best system you can get in a car these days but then again, when it comes to music and the devices used to listen to it, it’s hard to reach a consensus in that regard. That’s especially true when dealing with offerings from Bang & Olufsen or Burmester to compete against. But what does make Bowers & Wilkins stand out? 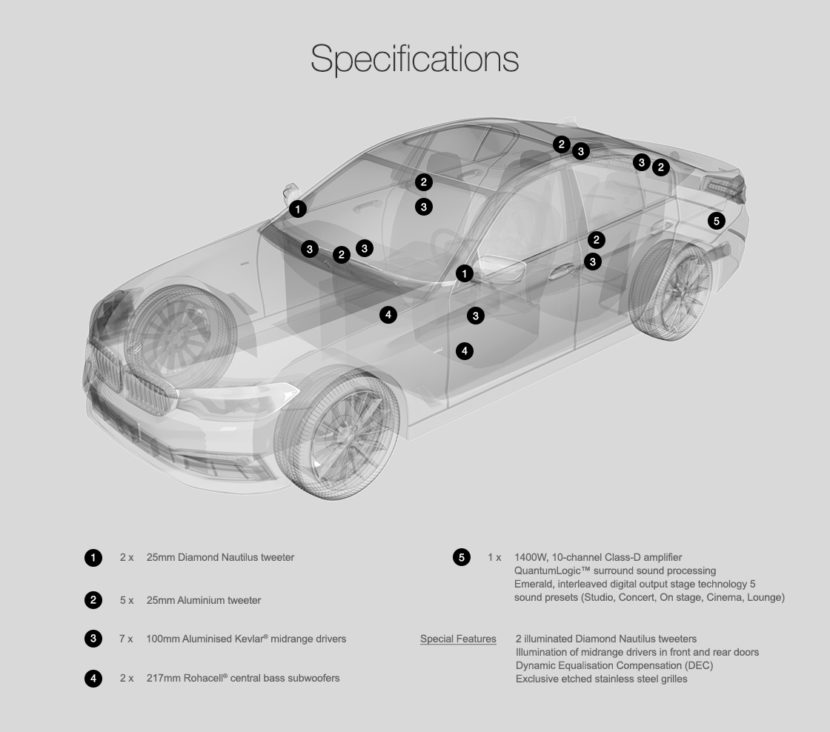 Well, the system was put together from the outset by having the engineering teams from BMW and Bowers & Wilkins join forces. Their aim was to create an audio system featuring advanced acoustic technologies such as Diamond tweeters, which works in harmony with the car’s interior architecture to deliver an incredibly realistic, completely enveloping audio experience. These tweeters are actually capable of delivering high notes that human ears can’t even notice.

The properties of diamond are prized in highly specialized industrial applications, from neurosurgery to CERN’s Large Hadron Collider. Its unique stiffness-to-lightness ratio also makes diamond the perfect tweeter material.  Furthermore, the Diamond Surround Sound System is perfectly integrated into the cabin of the new BMW 5 Series – acoustically and aesthetically. Tuned by the people responsible for the 800 Series Diamond loudspeakers, it utilities stainless steel speaker grilles, which have audio-ideal Fibonacci patterned holes that allow more sound to pass through whilst blending into the interior. Subtle illumination on the sail tweeters is designed to highlight the Diamond tweeter and the Nautilus spiral technology.

As for the numbers, the system comes with a 1,400W 10-channel Class-D amplifier, two 25 mm Diamond Nautilus tweeters, five 25 mm aluminum tweeters, seven 100 mm aluminised Kevlar midrange drivers and two 217 mm Rohacell central bass subwoofers hidden under the front seats. It may sound boring at first, but they sure do their job inside the cabin.