Ever since the BMW M2 came out it has been constantly compared to the BMW 1M Coupe. Living in the shadow of your older brother is not easy to do and yet the BMW M2 managed to win praise from nearly every man and woman that drove it. A couple of factors led to this conclusion but some, those that happened to drive both cars, still claim that the 340 HP predecessor is still the better of the two. How will they fare in a straight up drag race though?

Well, things are just as close as you’d imagine. To make things even more interesting, the cars are manuals, leveling the playing field and leaving the fate of the sprints in the hands of the drivers. Literally. While that may be the weapon of choice for enthusiasts taking their cars to the track, in a drag race, hitting the perfect shift is a bit more complicated. That’s also why there are three runs posted in the video below, as each driver wanted to improve his strides. 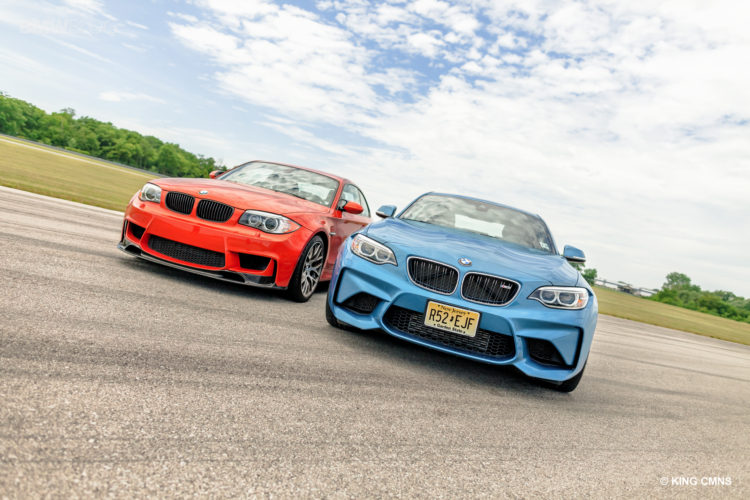 On the tech side of things, both cars use turbocharged straight six engines, but there are some notable differences between them. The 1M Coupe uses a N54 engine with two single-scroll turbochargers attached to it, tuned to make 340 HP and up to 500 Nm (369 lb-ft) of torque thanks to overboost. On the other hand, the newer M2 uses an upgraded version of the N55 engine with 370 HP and the same amount of torque, also due to overboost.

Considering the weight factor, that leads up to a power to weight ratio of 4.7 kg/hp for the 1M and 4.4 for the M2. Therefore, the M2 should win it but only by a hair. As I said above, the skills of the drivers will prove to be providential though. Nevertheless, it’s quite impressive to see how the two compare against each other in a straight line and just how careful BMW was in setting them up.

One response to “Video: BMW 1M Coupe Takes on Younger Brother M2 on the Drag Strip”