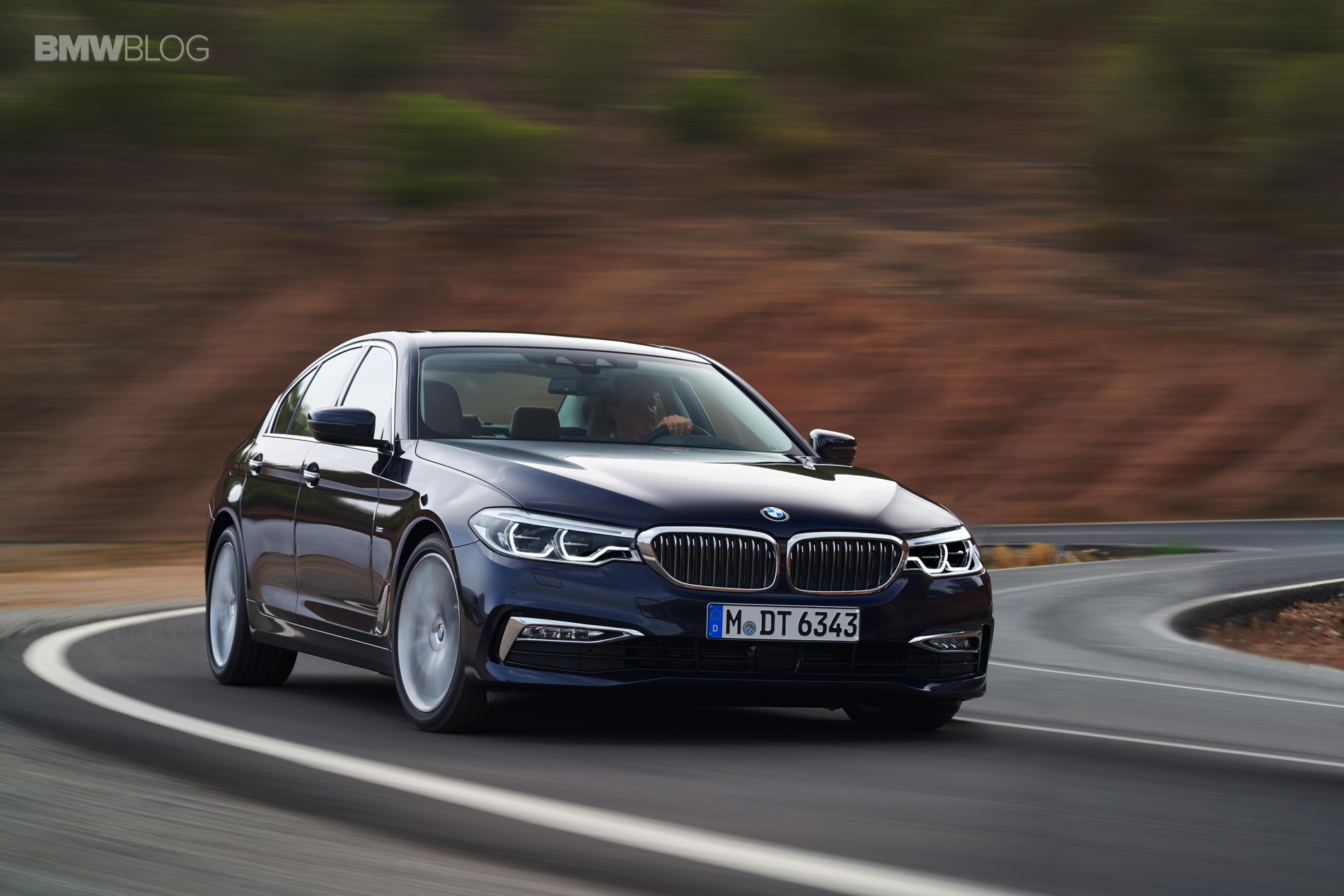 BMW has just showcased its latest 5 Series to the world. In its seventh generation, the 5 Series has become more dynamic and more luxurious than ever before. With its bones being built from those of the current G11 7 Series, BMW had a great starting platform for the current 5 Series. BMW took a bit of heat for the 7 Series, when it first debuted, for it not being as exciting, luxurious or opulent as it should have been. So BMW set out to create a new 5 Series exuded athleticism, luxury and elegance. 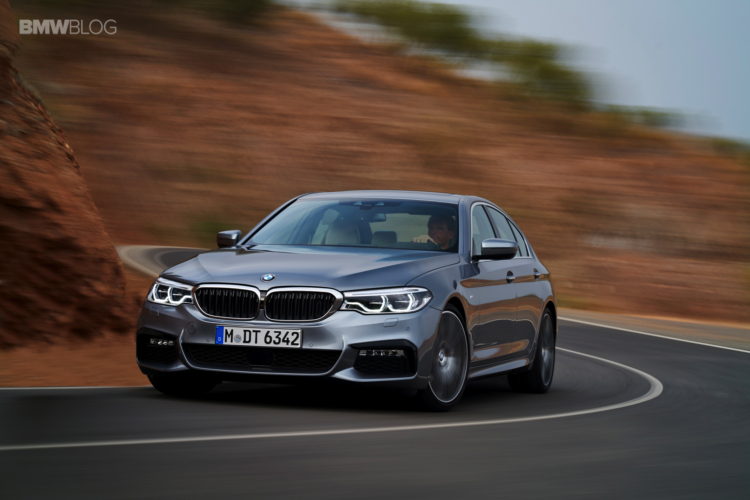 “The new BMW 5 Series will make a mature, confidently stylish and dynamic impression at every opportunity. The formal and precise design combines presence, aesthetic appeal and functionality in equal measure,” said Karim Habib, Head of BMW Design. The new 5 Series is longer (36 mm), wider (6 mm) and taller (2 mm) than the outgoing F10-generation car. But while it’s physically bigger than the outgoing model in every way, it looks and seems leaner, tighter and more muscular. BMW definitely nailed the athletic look it was going for.

The front end now features headlights that connect with the, now much wider, signature kidney grilles. Those headlights are now all LED as standard and are an evolution of the classic twin-circle BMW headlight. Adaptive LED headlights are also available, with BMW Selective Beam anti-dazzle high beam technology, boasting a range of up to 500 meters.

We think the new front end looks very good and is a significant improvement over the F10-generation 5 Series. The nose is leaner and lower, giving off a much more aggressive vibe. This could be the best looking BMW 5 Series face since the E39. Much of that is because, despite the face that it has impressive headlight technology, it’s actually quite simple up front. There’s not a lot that tries to dazzle, such as on an Audi A6 or Mercedes E-Class, it’s just a handsome looking face that won’t grow old quickly. 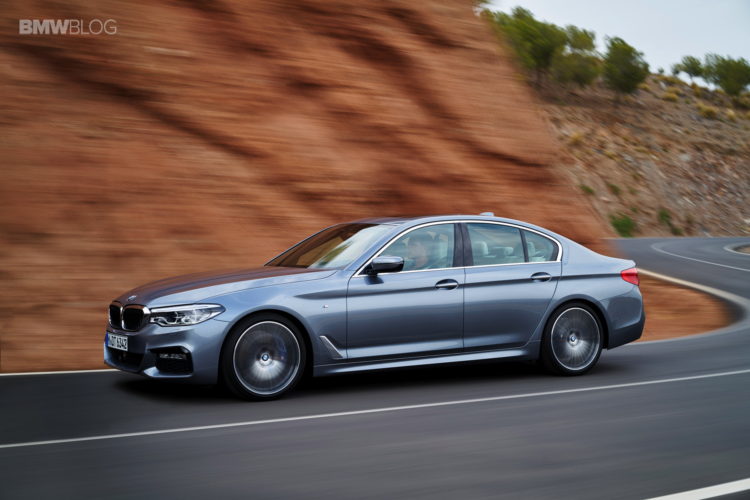 In profile, the new 5 Series looks its best. It’s far more muscular and athletic looking than before and is certainly up there with the Jaguar XF, in terms of athletic styling. “For the first time, the new BMW 5 Series Sedan brings together two traditional BMW design elements which are normally separate from one another. The swage line turns up as it heads rearwards, moving from shadow to light and sweeping up the Hofmeister kink in its path rather than continuing into the rear. This upwards motion lends the car a forward-surging character, and the expressive, swooping surface imbues it with an undeniable muscularity,” said Habib.

My personal favorite part of the new 5 Series is where that aforementioned swage line meets the front wheel arches. The front arch flairs out a bit where they meet and it gives off a very muscular look for a 5 Series. It’s vaguely reminiscent of the BMW M2 and that’s a very good thing. The depth and definition of said swage line gives the 5 Series a look of its sheetmetal being pulled tightly around its body. It’s very athletic looking.

The new 5er also ditches the the 7 Series’ ‘hockey stick’ Air Breather in favor of a more traditional fender vent. That works in tandem with the from Air Curtain to create better aerodynamics and reduce air turbulence in the front wheel arches. BMW also worked hard at optimizing air channels underneath the body, to further reduce air turbulence and decrease any lift, increasing vehicle dynamics. 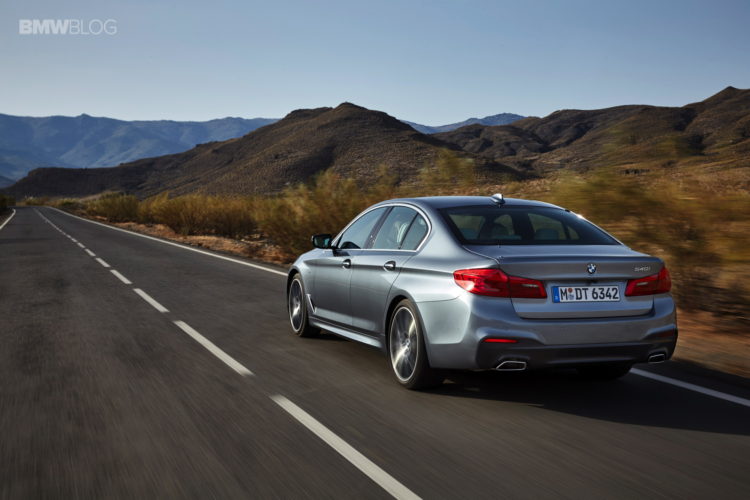 Out back, the wide, “L-shaped” taillights reach all the way to the outer sides of the car, increasing visual width. Along with that, the low-slung rear decklid give it a lower look and feel. The exhaust pipes are now symmetrically placed on either side of the rear on all models, not only on six and eight-cylinder cars. The only difference in exhaust pipes based on model will be their shapes, as round, trapezoidal, rectangular and quartet exhausts will be used on different models.

There will also be an M Sport package, which includes the exterior M Aerodynamic package (front apron with larger air intakes, side skirt trim, a diffusor-style rear apron and an exhaust system with two rectangular tailpipes) lowered M Sport suspension and M light-alloy wheels, in either 18″ or 19″. Inside, M sports seats with Alcantara covers highlight its sporting focus and are joined by the new M Sport leather steering wheel, exclusive floor mats, interior trim strips and aluminum pedals. The new 5 Series will also offer more colors than ever, with 21 exterior colors, including 11 metallic, 6 Individual and 2 Individual Frozen color options. There will also be a variety of wheel options, ranging from 17″ – 20″. 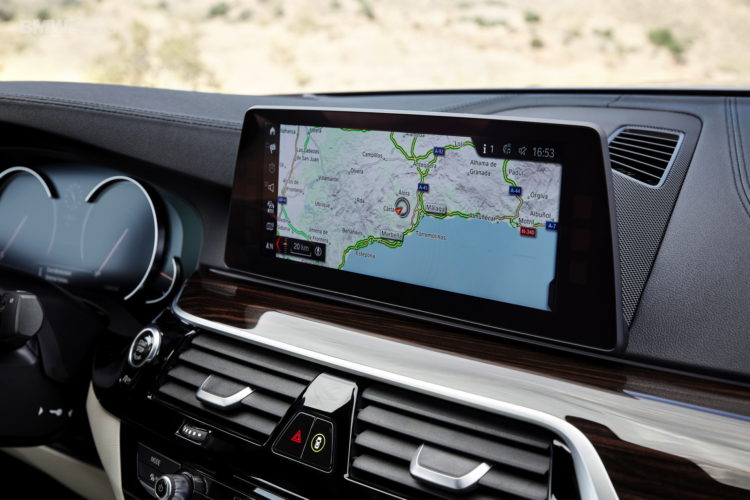 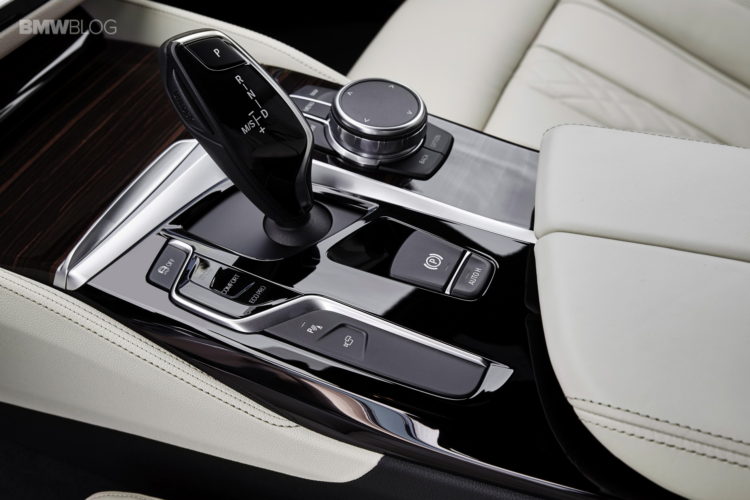 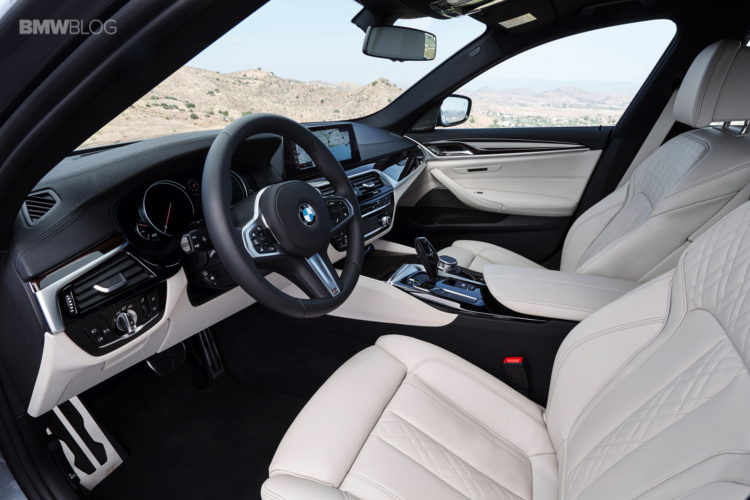 On the inside, BMW wanted the new 5 Series to be the perfect blend between luxury, technology and sportiness. It also wanted to make the cabin very business-like. “In the seventh model generation, we have upped the precision and the quality of finish considerably and revolutionized the display and control concept. The result is a BMW 5 Series that once again hits the mark as the ideal business sedan,”

The overall interior design was clearly taken from the big brother 7 Series, but that’s a very good thing. It allows 5 Series buyers to get the luxury that the brand’s flagship provides without having to shell out flagship money. It’s how design and technology should properly trickle down throughout an automaker’s model line.

A new headliner with built-in soundproofing forms part of the interior’s acoustic design. The sound absorbers built into the headliner eliminate interfering sounds in the particularly sensitive area close to the occupants’ heads. This not only increases comfort but it allows for easier conversation between passengers. Rear seats, as well as the fronts, now offer massage functions for the first time ever in a 5 Series. Eight different massage programs, each with a choice of three intensity modes, relax the muscles in the back and relieve the strain on the spinal discs while driving. The eight programs are subdivided into three categories: Mobilization, Relaxation and Vitality. 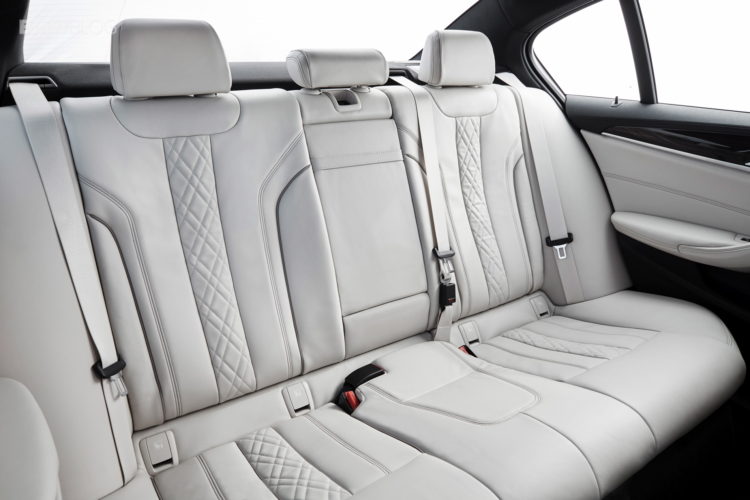 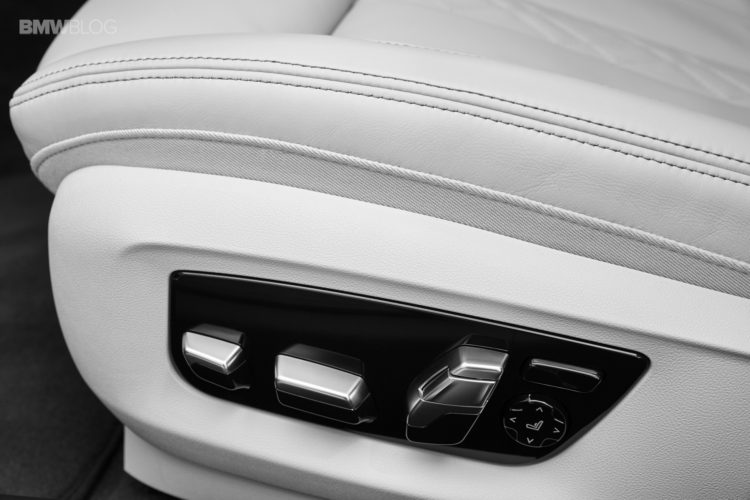 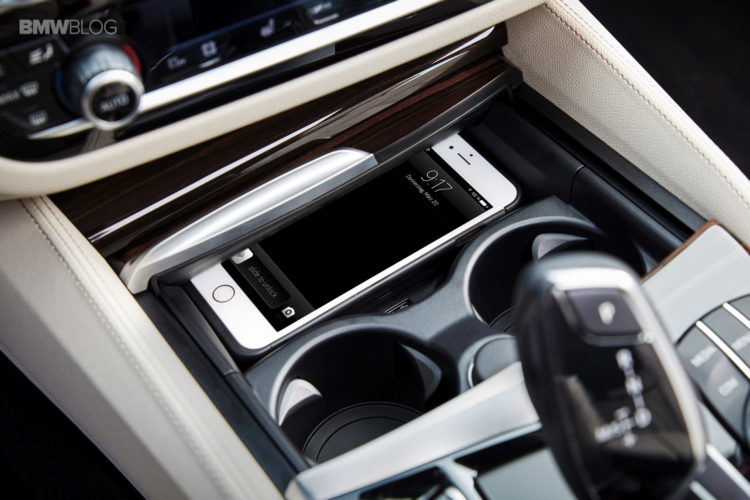 The seats in the 5 Series now have touch-sensitive controls. When a finger touches the switch located on the outside edge of the seat, thereby activating one of its five sensors, the corresponding menu opens in the central display. Lightly pressing on the switch again then carries out the desired adjustment, all clearly illustrated by a matching animation in the display.

The latest-generation of iDrive is also available in the new 5 Series, with touchscreen and Gesture Control. That, in junction with the new full-color Head-Up Display, makes the 5 Series feel every bit as high-tech and luxurious as the 7 Series. Speaking of 7 Series luxury, Two-zone climate control is standard on the 5er, but four-zone climate control with ionized and fragranced air is also optional. There’s even a choice of six different ambient lighting colors with eleven different effects and brightness adjustment.

Overall, we like the design of the new BMW 5 Series quite a bit. It looks better than the outgoing model on both the outside and on the inside. It’s a marked improvement in every aspect, whether that be design, luxury, technology or performance. The new G30-generation 5 Series should be a massive leap forward for the model, even if its design isn’t such a massive leap forward. Don’t judge a book by its cover.