AUTOCOUTURE’s “MPACT East”: What I Learned About Modding

Home » AUTOCOUTURE’s “MPACT East”: What I Learned About Modding 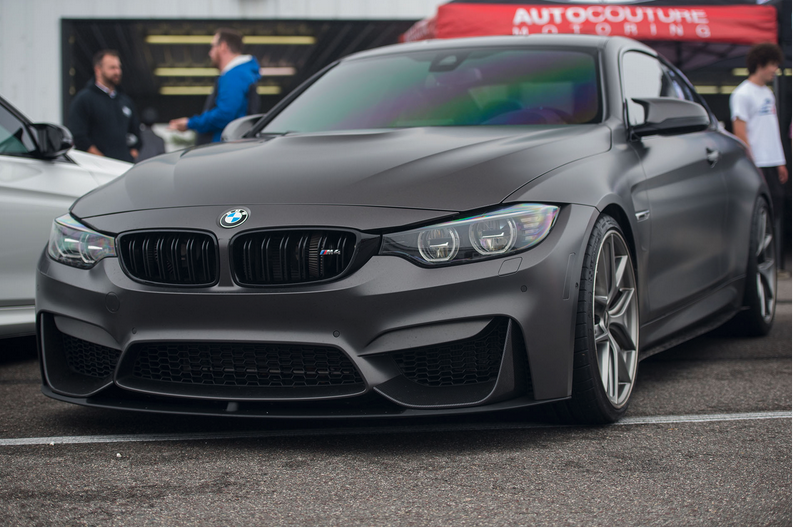 At about 6AM this past Saturday roughly twenty M cars, one “Gulf” schemed Porsche 991 GT3 RS, and of course the “ACM” support van, began to roll out of AUTOcouture’s Fair Lawn parking lot. Despite thick fog, sporadically heavy doses of rain, and jack-knifed tractor trailers, the mob of automotive fantasia heaved forward. The destination? MPACT at Pocono Raceway.

With AUTOcouture Motoring being the title sponsor of the show, the team was making the trek in order to set up their fleet. The show itself features a trio of automotive activities: roll racing, a track day throughout the infield course, and ultimately a car show where stock, but mostly modified M cars, come to display their latest touches. Having been lucky enough to tag along with the guys from ACM, I was constantly staring at cars that would be equivalent to the “bombshell” category on your favorite naughty site.

The F82 M4 that I had drove out to the track was primarily bone stock and modifications have never been something that I really wanted to do. Sure, I like them – I think some of it is really cool but with things like the pricing, the potential of reliability issues, and the restrain it puts on the car in terms of daily usability made modding a distant option for me. Until MPACT.

Before we left, a guy who had a Yas Marina Blue F80 said to me “it’s alright, the car is cool stock – but you’re not going to want to keep it that way after today.” And how right he was. Car after car, the modifications didn’t just make the cars more attractive but it made them unique from one another. That is a hard concept to grasp when you’re looking at a sea of modded out BMWs. But the reality was that any of the cars that were featured in the show, from ACM’s display or from others around the paddock, would be an absolute rockstar on the street.

Now, some guys go, what could be considered “crazy”, by dumping something over $30,000 into their cars. But that’s only relative, not crazy. At first I thought “why would you spend near $100K or maybe $100K+ on an M3/M4 when you could just buy… blah,blah,blah. But, the truth is – you can’t “just buy” one of these cars. Each of them bringing their owners tastes and preferences to the forefront of design and function. They take time, it takes an owner who is committed to the car because the process doesn’t just happen overnight. Atop of that they’re aren’t that many cars that come out of a factory for $100K that are as appealing as these.

With plenty of other cars, including a couple of M2s, an i8 and some Lamborghinis all rolling around the area, the show was packed with cool rides. In total, events like these reestablish what it means to be an enthusiast. So often we bicker and fight over the computer because of our opinions and ideas. Which, there is nothing wrong with – a good debate is healthy, but at shows like this, it seemed like all love.

Taking a lap around the scene with a couple other guys, it was really easy to just walk up and talk to people. It made the enthusiast world seem in harmony instead of at war. I would recommend this show to anyone – regardless of whether or not you’re even a BMW fan – it offers an incredible day. And hey, you never know – you might even end up liking something.