The first-generation Chevy Volt was one of the first plug-in hybrids to really hit the market in a big way. It was the most affordable plug-in on the market at the time and possibly the best. When it first debuted, thousands of people flocked to it to get on the plug-in bandwagon and it gained a huge cult following. It was actually a very good car. But as technology got better, the original Volt became old news quite quickly.

The new Volt is now on the market and it’s quite impressive. But it didn’t come fast enough for one Chevy Volt owner, which forced them to buy a BMW i3 REx.

Jeff Pantukhoff, a A San Clemente, California native, made the switch from his first-gen Chevy Volt to a brand-new Solar Orange 2015 BMW i3 Rex after a very long and thorough search for a new EV. Pantukhoff wanted the new 2016 Chevy Volt, but Chevy wasn’t offering a lease deal that he was happy with, so he went with the i3, as BMW was offering a deal more his speed. Pantukhoff was originally going to buy an i3 BEV from a BMW dealer in San Francisco and had a scheduled visit to the dealer to coincide with an upcoming business trip. The day before he was supposed to arrive, he called the dealer to only to find that his very car was still at the port at wasn’t available to buy. However, the dealer had the same spec car, but a REx version, and gave that to him for at a good price.

After making the switch from the Chevy Volt to the BMW i3, Pantukhoff noticed some key differences. One of the things he didn’t like about the i3, at least at first, was the shifter switch. The i3 has a strange switch mounted to the steering wheel column and it works in a sort of backward manner, requiring it to be pushed forward for Drive and backward for reverse, the opposite of a standard automatic shifter. This confused him a big and almost caused him a crash. He also wasn’t a fan of the the charging port being on the rear passenger side of the car, though that is likely due to having the filler cap in that spot on internal combustion cars, as it’s different from his Volt. 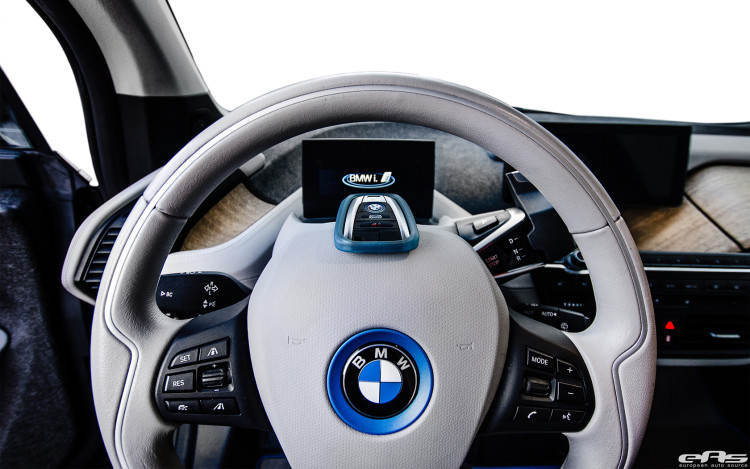 There are some things that he does like quite a bit, though, more so than his Volt. One thing Pantukhoff noticed was the range extending engine on the i3 REx was much quieter and smoother than the Volt’s and wasn’t noticeable when it was on. He also noted that the car rode just as smooth, if not smoother, than the Volt despite having stiffer suspension and much skinner tires. Thank the ultra-lightweight construction for that. Pantukhoff also is a big fan of the way it handles, saying that it ” takes corners like it’s on rails”. The BMW i3 also has a higher ride height than the Volt and much better all-around visibility.

Overall, it seems as if Pantukhoff is pleased with his switch from the Chevy Volt to the BMW i3 REx. This is a good display of open-mindedness, as many EV owners, whether they be Volt, Prius or i3 owners, tend to be very local customers and stick with one kind of car. But Pantukhoff tried something new and he seems to be pleased with it.

His account of the switch is over on Green Car Reports and it’s worth a read if you’re interested in EVs.

One response to “First-gen Chevy Volt owner buys BMW i3”