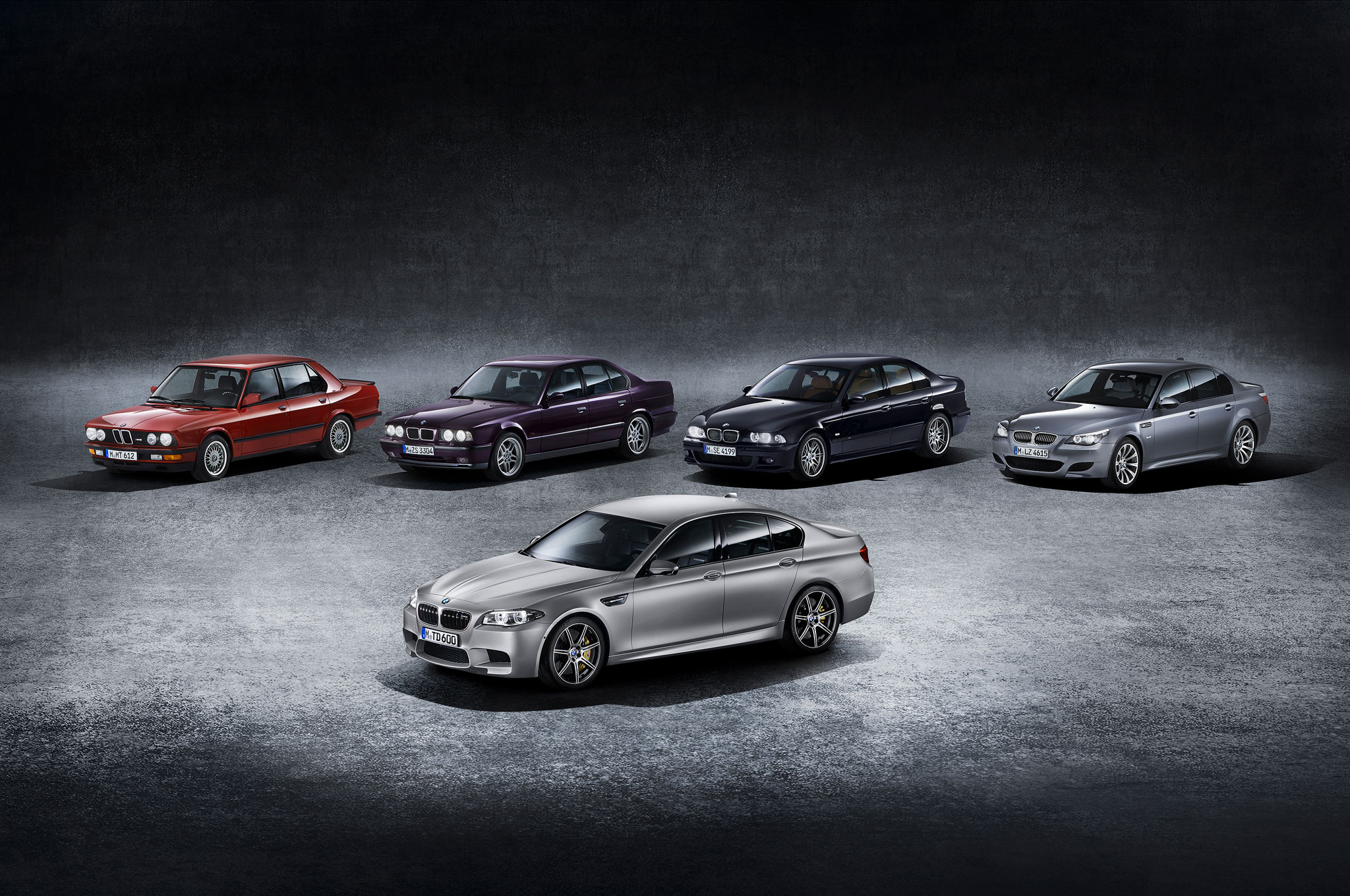 BMW M is about to make a monumental change, by allegedly offering all-wheel drive. M stated for a long time that this would never happen, but times change and customers’ desire shift. So we believe ///M will be offering xDrive on some of their cars in the future.

The first to be available to power all four wheels should be the M5. It’s the car that xDrive makes most sense in, anyway. So since the M5 will be forever changed, by the offering of xDrive (much like it was when converting to turbocharging), I thought I would pick my favorite of all of the rear-wheel drive only M5s.

Admittedly, it isn’t an easy task, picking a favorite amongst many wonderful cars. Each have their own “special sauce”, if you will. Since the inception of the very first M5, in 1985, there have only been five different models. I’m excluding the M535i, as it’s not a true M car. So let’s review the five, shall we? 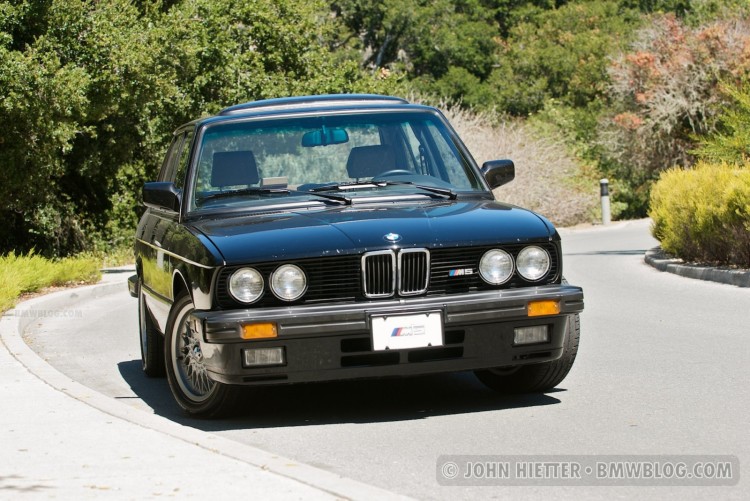 The E28 M5 will always hold a special place in my heart. Using a version of the M88 engine found in the, now idolized, M1, the E28 M5 was able to attain, at the time, Porsche 911 levels of performance and still seat five comfortably. In 1985, this not only was unheard of but was thought to be an insane notion. People’s minds were blown at the idea of a luxury sedan (saloon) with 286 hp and the ability to hit 60 mph in around 6 seconds. That was ludicrous at the time, yet absolutely fantastic. With lowered suspension, better brakes and a limited-slip differential, BMW’s M Division turned the standard 5 Series into a Porsche 911 beater. British motoring Journalist has a 1986 M5 in black with tan leather, and I can fully admit my raging jealousy. In this video, he talks about what makes the E28 M5 so special.

The E34 had quite large shoes to fill, after following the mighty E28, and I’m not so sure it did that quite as well as BMW had hoped. While not a bad car by any means, the E34 left many a bit cold, as it just didn’t quite add up to be the car the original was. Yes, the E34 was a bit more powerful, using a 311 hp S38 engine, than the E28 and it had some more modern gizmos, but it just didn’t handle quite as purely and, despite the extra power, didn’t feel much faster. It also looked a bit boring. Not that the E28 is knock-your-socks-off beautiful, but it just looks a bit more special than the E34. If there is a worst in this group of M5’s, for me, it’d have to be the E34. Not a bad group to be worst in, however.

What many people believe to be, not only the best M5, but possibly the best all-around saloon-car ever made, is the E39 M5. It truly was magnificent. With subtle yet aggressive good looks, a wonderful, naturally aspirated, 4.9 liter V8 with double VANOS variable valve timing, and a 6-speed manual. The E39 could sprint to 60 mph in under 5 seconds and is still one of the better handling sedans of all time. It’s also the last “pure M5”. After the E39, the M5 went all techno-fest on us. Not that they are bad, but it’s nice to remember the last of the “analog” M5’s. It’s many most people’s favorite M5, and it will be dearly missed.

The E60 M5, designed by Chris Bangle, is probably the most publicly scrutinized of all M5s. I’m not so sure that the criticism is fare, because most people were just complaining that it wasn’t an E39 M5 anymore. Now people miss it because it’s the last M5 not to be turbocharged. I call this one the monster M5, because it has a 5.0 liter, F1 derived, V10 that redlines at a mind-altering 8,250 RPM and makes a devilish sound while doing it. It could be had with either a 6-speed manual or a 7-speed, SMG gearbox. The one to get is the manual, as the SMG is quite clunky most of the time and only works properly on a track. Plus there is something wonderful to be had when shifting your own gears at 8,000 RPM in a V10 sedan.

The styling and technology is where the E60 seems to fall down a bit. It wasn’t really a good looking car, as I never thought the E60 5 Series was to begin with, and the interior is just filled with all sorts of techno-nonsense that no one needs. Plus those were the dark days of iDrive, and everyone would like to just forget those already. So while the E60 M5 is quite flawed, it could still handle like a champion, had an engine from the gods and is the last naturally aspirated M5 ever made and the only V10. This gives it some Kudos in my book. 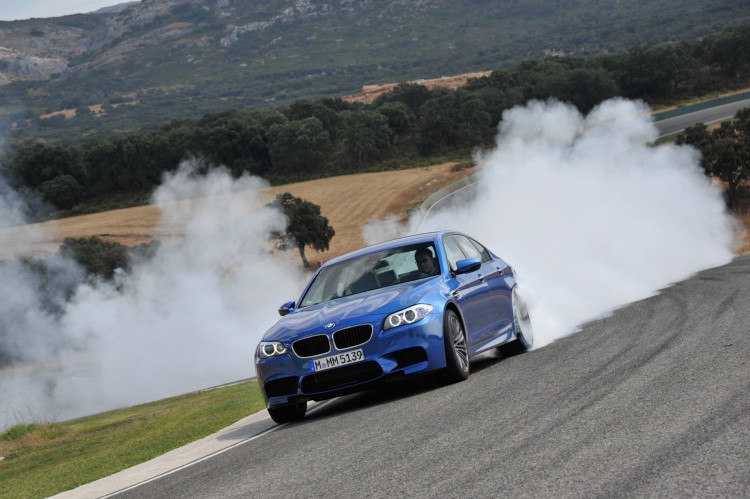 Just like the E60 was hated at first debut, the F10 was as well, by many. And unfairly, because most were just upset that, again, it wasn’t the old one any more. The M5 had moved from the screaming V10 of the E60 to a much more polar bear-friendly twin-turbo V8. This offended many people who proclaimed “Witchcraft!” at the thought of an M car with turbo-snails under the hood. Turns out, the F10 M5 is utterly fantastic. Sure it’s not as pure as, say, an E39 or E28, but it sure is a proper sports car. It handles better than most track focused sports cars, and it’s still a comfortable luxury car. The F10, thanks to its turbo V8, makes 556 hp and can hit 60 mph in 3.7 seconds. This is aided by the fact that instead of a clunky SMG, BMW switched to a 7-speed dual-clutch gearbox, which proved to be a massive improvement. The F10 M5 may not be as pure as the others, but it can still excite, just in different ways. Instead of the lithe, nimble handling M5’s of the past, the F10 is a brute with enough hp and torque to pull planets out of orbit, yet still seat five in perfect luxury. Isn’t that what M5’s are supposed to be anyway, a dual-personality sports car?

The M5 has gone through some pretty dramatic changes over the years, and every iteration is great. It really is tough to pick a favorite in this wonderful collection of cars. If I had to though, it would be the E28. I know it’s cliché to pick the original, but it just does something to me. It transports me back to a time when driving enjoyment trumped all else. Plus it revolutionized the car industry and created a segment that so many other automakers mimic today. The E28 is my favorite; let me hear yours and how you’d order them all.