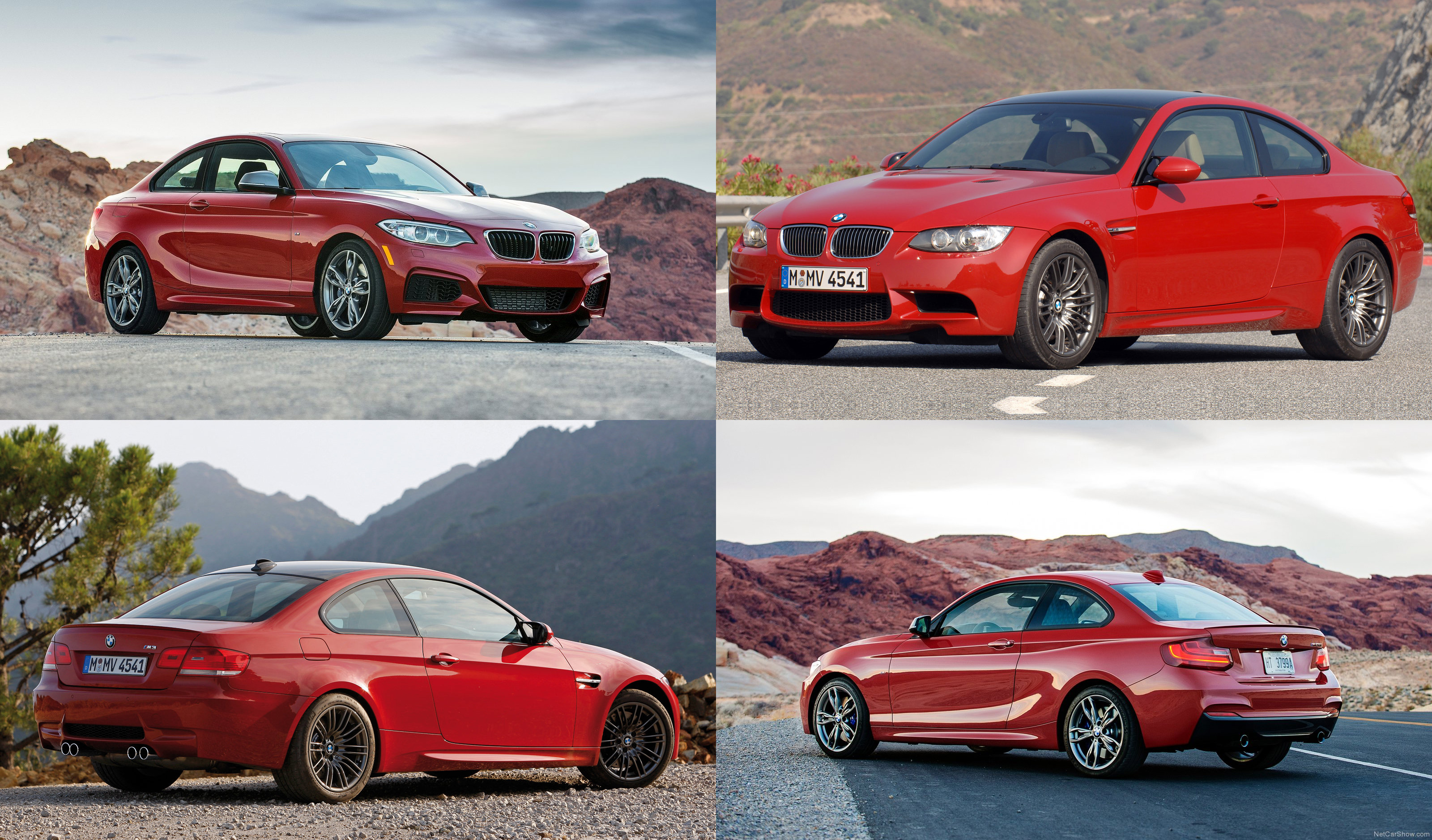 Now you might think this is a crazy comparison, but I just went through this buying process and ended up buying the winner. Both of these BMW sport cars are aimed directly at driving enthusiasts. The intriguing part is that the cost to acquire both can be very similar. The M235i carries a base MSRP of $44,050 and if you go crazy with the options, then the M235i can easily jump over the $50,000 mark.

BMW tries to correlate the M235i with the classic BMW 2002 in terms of heritage, which I kinda get it but in reality it’s more or less the same size as the E36 M3, albeit with a few more pounds and quite a bit more horsepower and torque.

Bu for the sake of this comparison, we’ll stick to comparing the M235i with the two door hardtop E92 M3. Both M235i and M3 seat four people, and having sat in the rear seat of both, I’d give the M3 the edge in seating position and comfort rear passengers.  The E92 M3 seats are a little more sculpted and hold you better when the car is being thrown around. Front seats for both M235i and M3 though are equally comfortable and hold you snug for aggressive driving.

I have to give the edge to the M235i for more advanced cabin tech. Though neither the M235i or the M3 I have tested came with the Head-Up Display, the M235i does have a second display screen in the instrument cluster that can show you upcoming route instructions.  M235i has the newest iDrive and a larger touch knob. I also think the new M Sport steering wheel with controls is better than the E92 M3’s steering wheel. 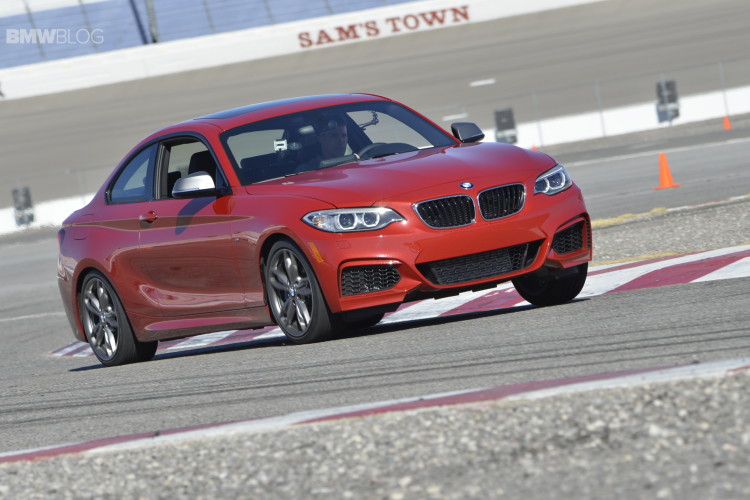 Back in January, I went to the international press launch of the M235i where I was able to drive the car on the Las Vegas Motorsports Speedway. Known as a fast track, I was able to push the M235i at speeds up to 130 mph on the oval, and hustled it around the infield course there. While there were no elevation changes, the track driving was enough to tell me the ///Massaging the M team did on the M235i created a true drivers car.

The M235i does have Electric Power Steering and while it cannot rival the feedback of the hydraulic steering of a E92 M3, it is extremely accurate and well weighted. It’s far better than the first F30 BMW 328i I drove.

The M235i is a very tossable car but does have a surprising amount of body roll when fully loaded up in a corner. The M235i suspension set up delivers a very firm but not harsh ride. EDC is standard. Aiding the handling of the 3,500 lbs M235i is a weight balance of 52 % front and 48% rear.  BMW rectified a long standing sin in my eyes by finally fitting a non-M car with Michelin Pilot Super Sports, a set of fantastic tires. Read here our review on them. 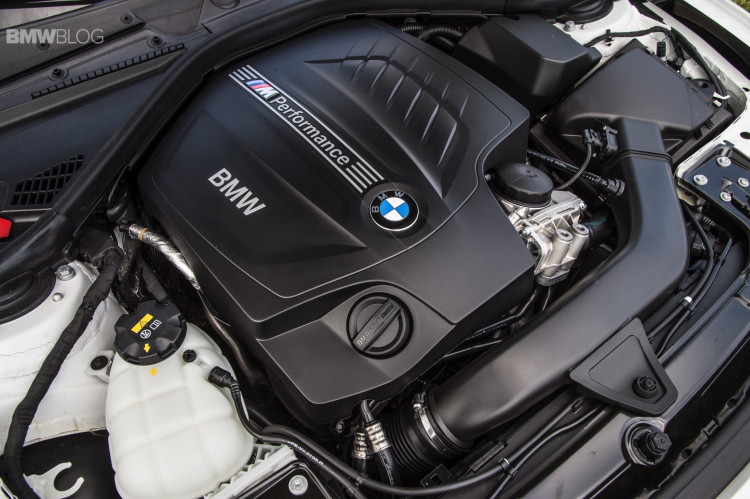 The M235i is power by the N55 inline-six cylinder 3.0 liter DFI single turbo which is twin-scrolled. This motor received programing by BMW M and was given extra cooling capacity to deal with the increased heat a turbo kicks off making more power. The motor really scoots the 3500 lbs, with power delivery being immediate with gobs of torque down low. It truly has no perceptible turbo lag. Hard on the brakes, turn in while trail braking, see the apex, get on the gas and the M235i blasts out of the corner. 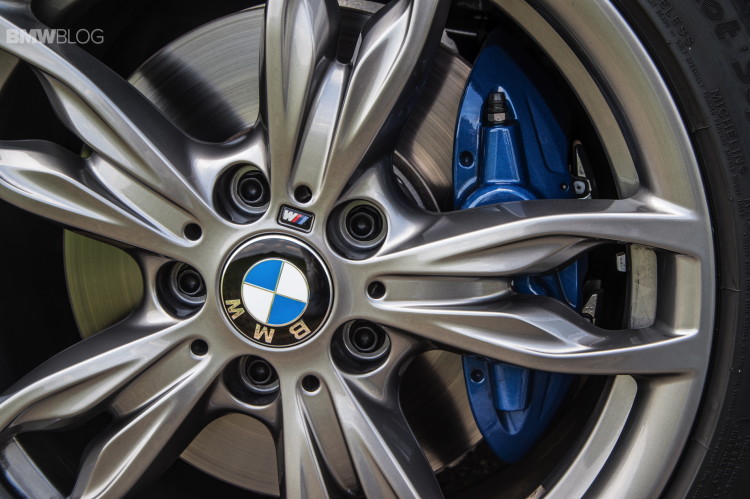 BMW beefed up the M235i’s braking ability by adding M Sport Brakes with 13.4” rotors and 4-piston calipers to the front and 2-piston in the rear. Given the lower weight of the M235i, more tossable nature and massive torque down low, I’d give it the edge in an autocross.

Perhaps the biggest surprise for me regarding the M235i is that BMW dropped the DCT with the new model. I really can’t explain the decision behind it since BMW had a DCT available in the 135i. The 8-speed automatic transmission that comes with paddle shifters is a no cost option in the M235i and shifts quickly.  BMW even included the 8-speed auto in their M235i Racing car as the only transmission choice. So clearly it’s up to handling the power of the motor and delivering rapid shifts.

It’s just that dual clutch transmissions are the default standard when looking at M3, M4, Porsche 911, Cayman, Boxster or even a Macan. BMW does not allow you to option an LSD on the M235i but it is available as a catalog option in the BMW Performance line, not from the factory.

The E92 M3 has all the makings of a modern classic with its aggressive looks bulging “power dome” hood, distinctive carbon fiber roof and athletic stance. Half way through its production run, BMW introduced the Competition package (ZCP) that lowered the suspension, added some killer BBS wheels, remapped electronic dampener control (EDC) and dynamic stability control (DSC). For the first time, in the US at least, BMW offered some small batch special run M3 Frozen editions and Lime Rock editions, and though these offered no additional performance have retained their values well.

The cabin of the M3 has aged well and stayed current on technology.  From model year 2011, the M3s have the new version of iDrive though not the touch controller. If produced after March 2011, they could be optioned with 6NR, or BMW Apps which allows use of ///M Lap Timer. The cool app will automatically calculate laps and times for the user without the need for pre-installed track map data. The mpp can be used on virtually any closed circuit. 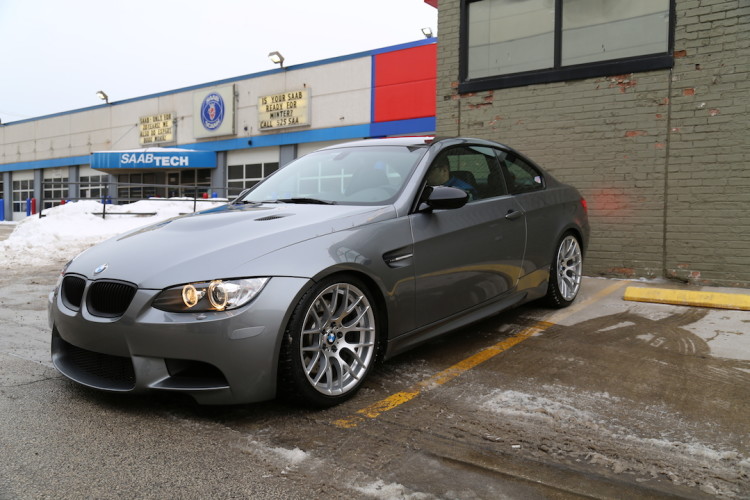 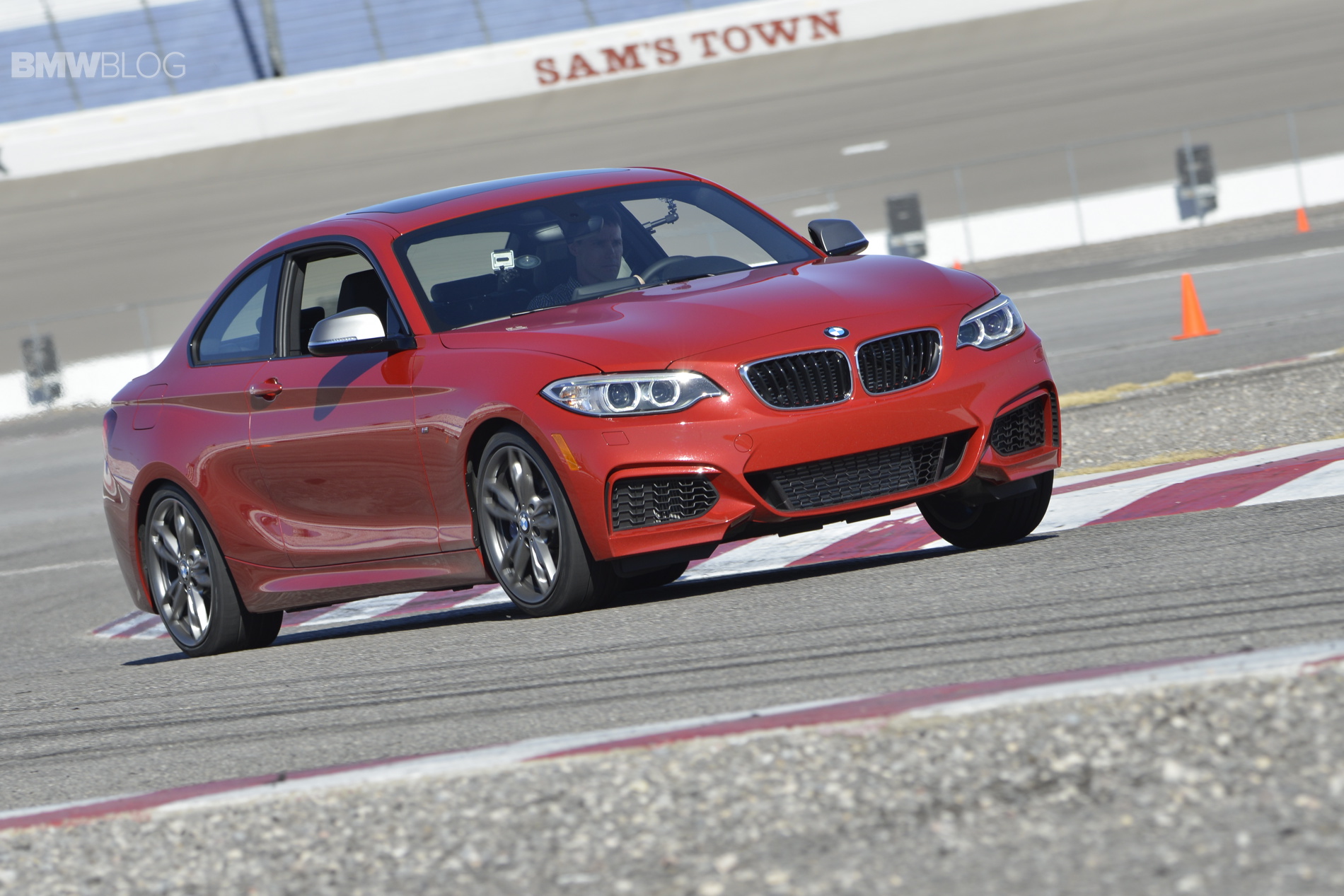 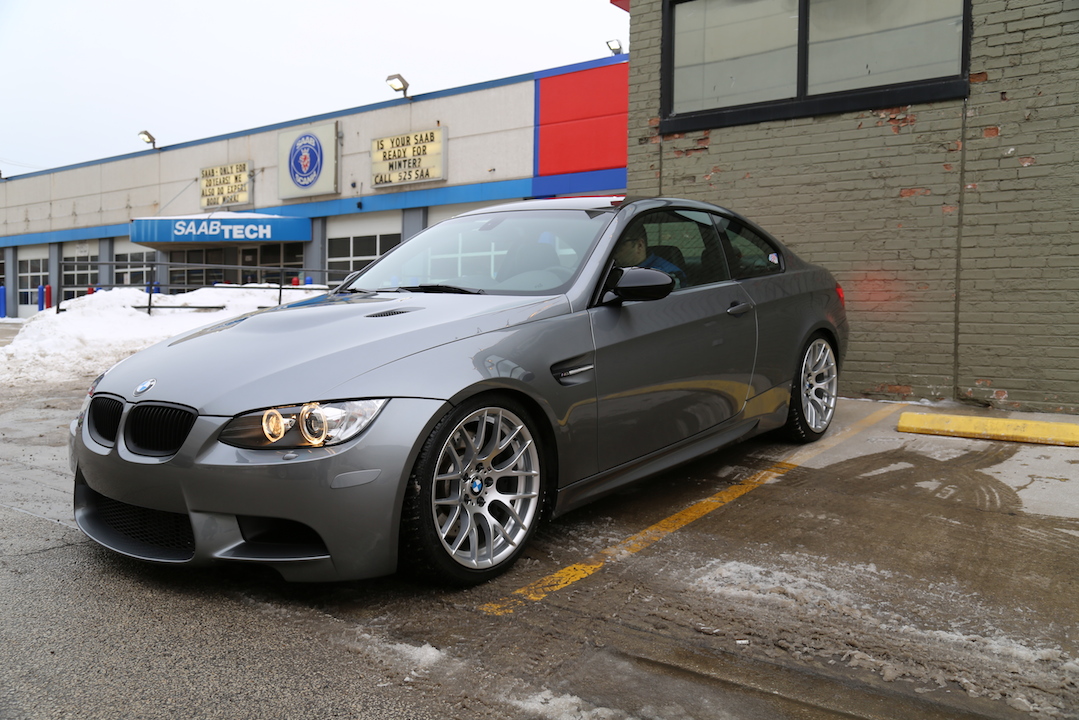 The E92 M3 has fantastic handling, firm without being harsh. Pitch it into a corner and the M3 sticks and you can roll on the throttle coming out all the way to the glorious 8,300 rpm redline. I find the E92 M3 handles better when equipped with Electronic Damper Control which has three settings. The M Dynamic Mode when combined with the M Limited Slip accessed through the M button on the steering wheel allows much more tail out driving than non-M BMWs,  including the M235i. As with the M235i, there is mild understeer in the E92 M3, but body roll is far less than the M235i. 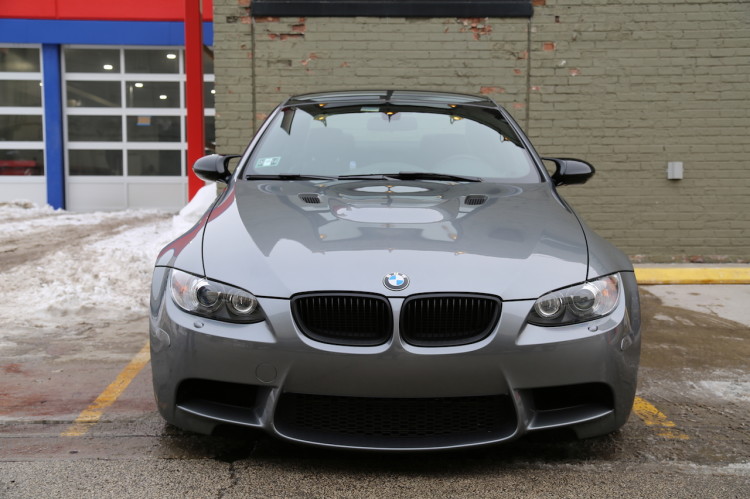 With more weight to manage in the corners, the E92 M3 manages the heft deftly with its larger track and more grip. The M3 Limited Slip Differential does help put the power down nicely coming out of the corners, letting you unwind the motor. The wider track and longer wheel base also give the E92 M3 more high speed stability. In a race track setting, I give the edge to the M3 over the M235i.  The hydraulic steering feedback of the M3 is far more communicative that any EPS unit is, though it is best when in its Sport setting.

The M3 has some wicked looking and very functional 14.2” front, 18.3” rear cross drilled rotors that help hall the massive beast down to a stop from 70 mph in 153 ft, nearly identical to the M235i’s stopping distance. Despite having a carbon fiber roof, aluminum hood and engine which weighs less than the one in the E46 M3, the E92 M3 has a curb weight of 3,700 lbs, the most heft of all M3s ever.

However, the heft gives the M3 a bank vault like quality to it. The chassis is so solid it makes you think it’s carved out of a single piece of metal. The second criticism of the E92 M3 is of its torque delivery. Many like to say it doesn’t have much torque, but I would hesitate to call 295 lbs-ft low. Rather, it’s the location of the torque at 3,900 RPM. You really need to rev this motor to let it shine.

However, this gives the E92 M3 some character and it requires a different technique of driving to get the most out it. Especially when you corner, if you get caught too far down the RPM gauge, then the M3 won’t be as quick out of the corner as you would expect, but this can be easily corrected by keeping the revs high. This unique character will give the E92 M3 enduring appeal, much as a 911’s unique rear engine has for it. Lastly, I think the stock exhaust on the E92 M3 is too quiet and have heard many owners state the 16.6 gallon gas tank being too small.

The M235i is going to be less expensive on gas with its torquey turbocharged 6 cylinder. Further, being the M235i is new, it has $0 maintenance for 4 years, 50k miles.

BMWʼs 4.0 liter V-8 cranks out 414 hp and runs to an astonishingly high 8300 rpm while emitting a most exotic wicked growl. This S65B40 motor produces 295 ft/lbs of torque at 3900 rpm from the last naturally aspirated M motor.  There in lies a possibility of a slower depreciation curve on the M3. The M235i has a N55 inline-six that will cost you zero to maintain for 4 years/50k, plus you know the tires are going to be new when you buy it. The M235i takes 5w/30 oil which is far less expensive per quart and takes 7 instead of 9 quarts.

When it comes right down to it, both of these cars prove to be a huge blast to the driving enthusiast. Even though, when pushed hard, the M3 is more rewarding. The softer suspension and greater body roll of the M235i combined with the lack of Limited Slip Differential hurts it here. Also controlling a high revving naturally aspirated motor is easier and more intuitive when near the cars limits compared to a turbo motor.

In my case, I happened to run across just the right 2011 E92 M3 optioned just as if I were to have ordered it, right down to the six speed manual, Competition Package and BMW apps. Factor in, an owner who fanatically maintained it, a low 14k miles then add a DINAN intake with matching exhaust and I knew I found the right M3.

However, if I had been unable to locate just the right E92 M3, I would have been very happy to own an M235i…until the M2 comes out.