Who among us doesn’t day dream of being as talented as BMW Racer Bill Auberlen or imagine drifting a car like they do on Top Gear? Well every now and then you get those epiphany moments in a car where it all clicks. Mine came this past weekend, when I experienced first hand what M Dynamic Mode really means to an average driver. I couldn’t have had a more perfect set up. An all day Auto Cross school put on by BMWCCA which was topped off with a timed competition in the wet, and it was a whopping 48F. And did I mention that the Michelin Pilot Sport 2 rears on our 2011 Valencia Orange 1M were worn? Talk about a recipe for oversteer! Rainy and cold make for some of my favorite conditions for learning car control. It pulls the speeds down and amplifies your car handling mistakes.

Sitting at the start in the comfort of a nice heated seat in the 1M, my mind is racing through the course trying my best to recall the track walk take home points noted by some SCCA National Champions that were our instructors. About halfway through the course apex the gate’s first cone on the right or the last cone on the left to set up for the hard right that comes up next. Then out of the corner of my helmet, I see the starter pointing the flag telling me to go. I launch the 1M out of the start gate braking the rear end loose in first and then again in second. Man… it’s slick! I need to be smoother with my inputs and throttle application. I am so good at knowing what I should be doing but for some reason not always good at doing it. The instructor is giving pointers as I try not to “overdrive” the course.

Through the aforementioned gate about mid course and now it’s full throttle in second. Wow… that Overboost function is a blast. Now hard on the 1M’s big brakes while keeping in a straight line for a 90° right-hander. I turn in looking forward to the entry point of the upcoming slalom. I roll on the throttle a little too fast and yep the ass end of the 1M is coming around with a big rooster tail of water. Hell, I am committed now to a spin now so I finish the 360° and head on to the slalom section knowing full well everyone at the school is watching the noob in, more car than talent, 1M finish.

After the slalom section, there’s a 180° turn. I overcook the speed into this and am surprised at how much the 1M understeers this corner as I just cannot get the 1M’s nose to turn in here. I fix this though with a judicious stab of the throttle and rotate the ass end out to get pointed straight. I finish the rest of the course and see the end which is another short burst straight. Full throttle and what’s this? The ass end is coming around again because of my application of Overboost on wet undulating pavement that just unweights the end of the car enough to send us sideways through the finish. Ugh! I have a lot to learn today as the DSC completely off has exposed. 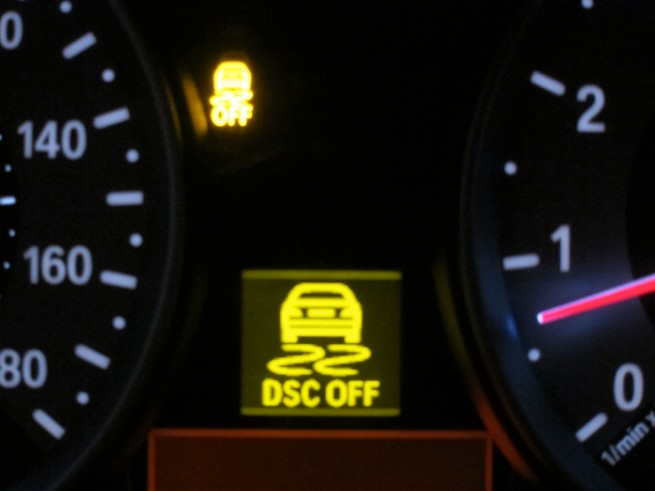 Before you castigate me for spinning a 1M, think about this. Where can you go to purposely run over the limits of a car? The street is definitely not the place for learning the lofty limits of an M car or any car for that matter. Tough a race track is also great place to learn, it can punish you severely if you go over your abilities in the wrong sections.

In the morning’s second round of driving, I decided to engage the M Dynamic Mode. I reach up over the center vent and engage it. One single tap will put you in M Dynamic Mode. Continue to hold it and it will turn everything off and you’ll see DSC off in the instrument cluster. M Dynamic Mode is a version of Dynamic Stability Control where the 1M raises the threshold before the electronics intervene. The driver can experience more dynamics and allow tail out drifts. Yet, it reins things in before you get out of control. In other words, perfect for people like me!

I’d never really played with M Dynamic Mode much. I was accustomed to the E36 M3 and E46 ZHP handling interventions and had found them to be rather intrusive, so in the past I chose to run auto-crosses and track days with those turned off. 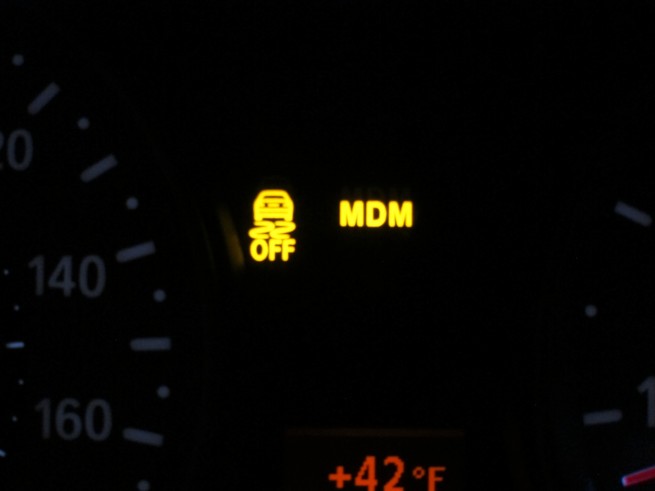 On launching the 1M with M Dynamic Mode (MDM) I noticed a bit of wheel spin, but it’s not bad. Can’t tell yet if I am being more smooth with my inputs or if the MDM is saving my ass. Coming up to the hard 90° right hander I spun in earlier, I dive deep into the turn and nail the brakes on small section of better griping pavement. Turn in and roll on the throttle, now the ass end kicks out but doesn’t come around as I shoot out into the slalom. I stay in the gas and the 1M holds a perfect drift coming out of this corner. Nice!

At the end of the slalom I try trail braking into the 180° turn. Trail braking loads up the front tires nicely and helps the grip in the front of the 1M. As I roll back into the gas the MDM holds a slight drift coming out of the turn! Damn! I feel like I’m on Top Gear coming into the last section. Just for science sake I nailed the throttle to the floor in the last section where the last time I lost it coming across the finish. M Dynamic Mode puts the power down but keeps me from coming around when I hit the rippling section of wet pavement that unweights the rear. You have got to love German engineering! My seat of the pants feel tells me the MDM will let you hang the ass end out about 15°. I’ve queried BMW on this degree allowed and if we get an answer, I’ll add it. 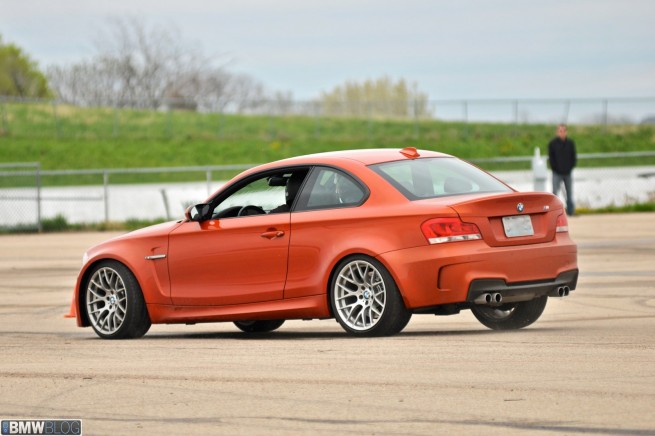 Of note was the M button on the steering wheel. Shoot me but I didn’t like it. It just seemed to make throttle modulation in the 1 Series M more abrupt. I realize on other M cars it activates different shifting patterns on DCT or suspension settings in EDC. However, in the more analogue 1 Series M I don’t find it all that useful and neither did my instructors who got to drive the 1M. I found my preferred set up to run was M button off and M Dynamic Mode engaged. Set up like this, the 1M felt like a very tossable yet incredibly powerful and controllable car.

The 1M LSD (Limited Slip Differential) was a different story all together. Limited slips help put the power down coming out of turns. In car with an open differential in a corner under power, the inside wheel is unweighted and could spin. BMW addresses this with braking that inside wheel on electronic differential cars. A genuine Limited Slip Differential instead routes torque to the outside tire where the grip is and helps with putting the power down in a more controlled fashion. The LSD also helps with traction even on snow or ice. BMW states that it “even reacts to the smallest differences in rotational speed between the right and left rear wheel – and imposes a fully variable locking action of up to 100%. The detectable results of this intelligent channeling of drive power is optimum traction and a maximum of thrust on all road surfaces.” Such incredible technology but BMW limits LSDs to M cars only now since about 1996. If you want a more in depth description of differentials, watch this Youtube video:

If BMW M has decided that the Limited Slip “M Differential ock” is worth the complexity, weight, cost and additional maintenance, there should be no doubt that the LSD definitely adds to the performance capabilities of the M models. The 1 Series M has a lot of power for a short wheelbase and can be a handful. It gives it a lot of character but also should garner respect for it’s ability to oversteer. Even Top Gear Australia totaled one. BMW has developed some incredible M specific performance aids so don’t be quick to dispatch them especially on public roads. 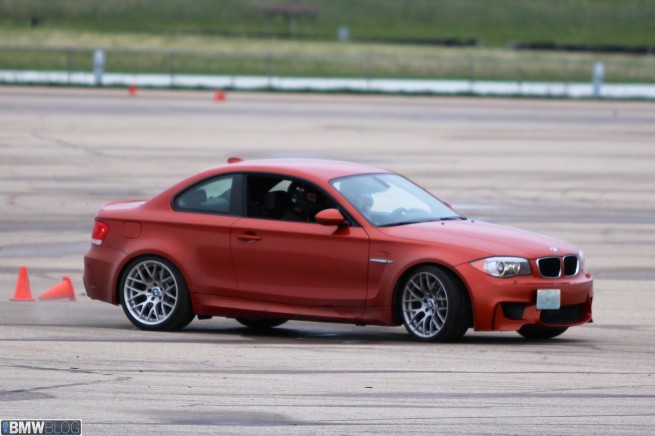 As I progressed throughout the day, I brought my course time down from a pathetically slow 103 seconds to a more reasonable 92.6 seconds with no cones while learning MDM. My instructor was able to run the 1M in the 88 second range and even he ran with MDM on and M button off. I fully respect those with the talent to drive these powerful M cars with all BMW’s slick traction aids off. I only auto cross and do race track events a few times a year and I just don’t have that gift to be able to drive like Auberlen. But with M Dynamic Mode and the wicked cool M Differential Lock, the 1 Series M made me feel like I could even if it was just one corner or two. 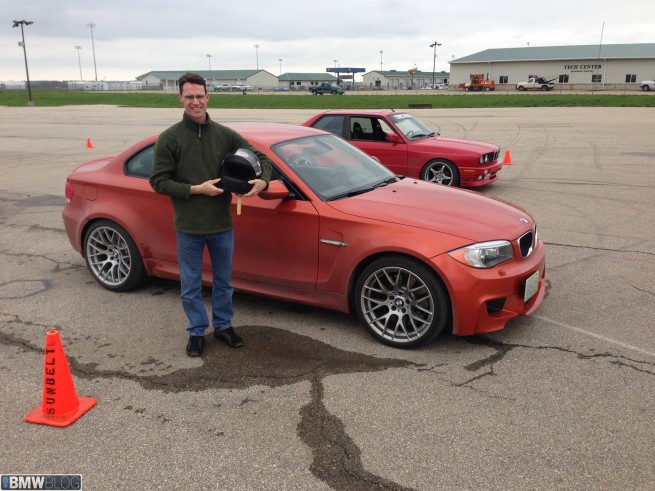