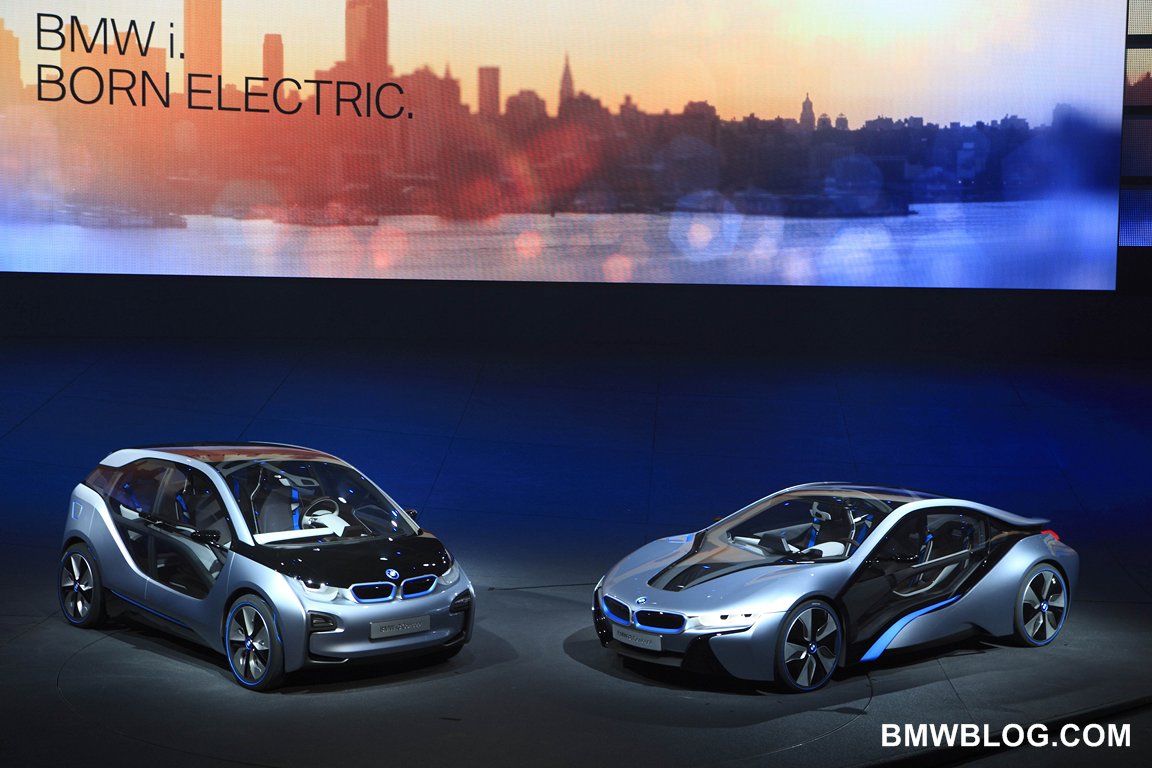 Frankfurt am Main, Germany – While the fanboys drool over the i8 concept, the i3 is the car that is critical to BMW’s ‘i’ sub-brand success. The i3 is built to fit the personal transportation needs of residents of mega cities (cities with a population over 10 million and an urban density of 2,000 people per square mile). These cities usually have well designed, effective public transportation systems. But that doesn’t dampen the desire for the independence that having access to a car can deliver.

Make no mistake about it, the BMW i3 definitely belongs into a sub-brand of BMW. This is a car with a top speed of 93 MPH, more than adequate for driving on urban streets and ring roads, but when a Golf TDI can breeze past it on the autobahn . . . well, you get my point. This is a different kind of BMW. 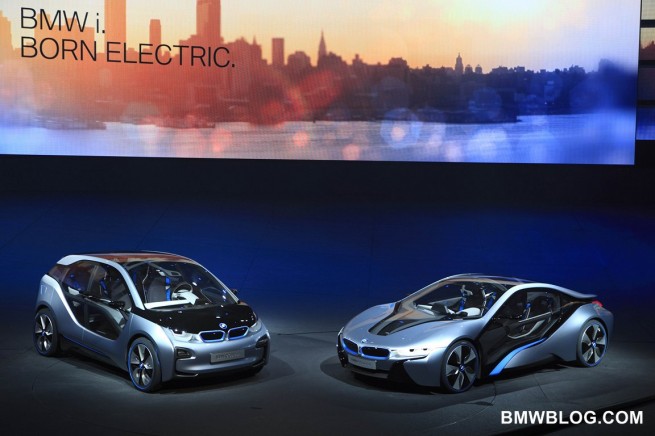 In the grand scheme of things, and keeping the i3 on home ground – a congested urban environment, a look at some potential competitors can shed some light on BMW’s thinking about an agile urban vehicle. An obvious comparison can be made to the Nissan Leaf. The Leaf has 107 HP available (207 lb ft of torque), it goes 0-60 in 10 seconds, it’s about two feet longer than the i3 and about the same height. But it weighs 625 lbs more than the i3. That’s a full complement of passengers, before anyone but the driver is in the car.

Maybe, if you just have to have a hybrid, the Honda Insight sedan could be compared. While not all-electric, it has decent mileage and a fairly small carbon footprint (if you care). With a combined gas/electric HP of 111 HP and 181 lb ft of torque, the Insight manages to make 0-60 in just under 11 seconds. However, unlike the Leaf, Honda has kept the weight down on the insight, it comes in right about the same weight as the i3. 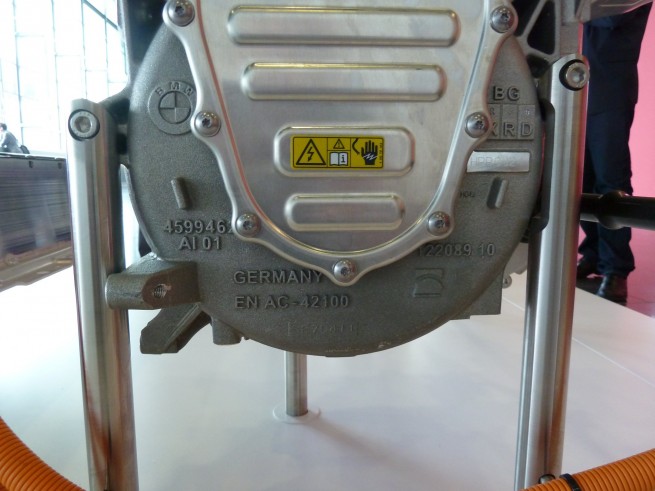 The compact electric motor in close up. It’s ready for production (if it isn’t already in production).

As far as packaging is concerned, the Leaf and the Insight may have slightly more passenger room and certainly more cargo room. But wait, the i3 has a couple of aces up its sleeve. For one, the i3 boosts 170 HP and 184 lb ft of torque. That’s more torque and equivalent HP to the mid-’90s Ford 2.5L Duratec V6. And that torque propels the lightweight i3 from 0-60 in a tick under 8 seconds.

If you want to find an equivalent acceleration comparison in the BMW 1 series line you’ll have to look past the 116d, the 118d, the 120d, the 116i, and the 118i before you find, in the gas-engined 120i, a similar performer. That is pretty intriguing. BMW understands that to be safe, it has to get out of its own way. And that’s exactly what the i3 can do.

When Adrian van Hooydonk described the design he mentioned that the designers and engineers worried about weight at the gram level, and it can be inferred that the engineers also worried about electrical consumption at the milliwatt level. And that may explain the 93 MPH top speed, the use of an electric steering rack that I have yet to see in another BMW, and will probably manifest itself in a number of small savings that careful investigating will uncover. Regardless, these solutions and savings will be clever. And when the purpose of the vehicle is kept in mind, megacity transportation, they are less compromise than promise. 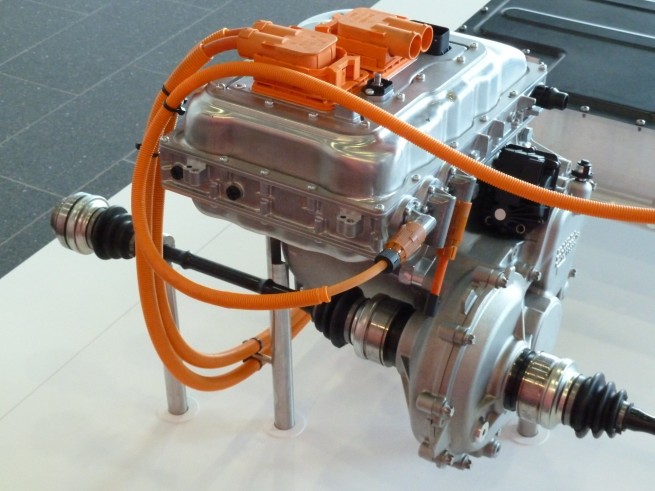 The motor’s electronic package resides above the motor and appears to take up almost as much space as the motor itself (although it should be somewhat less dense than the motor).

The range of the i3 (given some degree of restraint on the part of the driver) should be around 150 km (or somewhere between 80 and 100 miles). Using fast charging techniques, the battery pack can be brought back up to 80% charged within an hour, or, using normal charging, fully charged in 6 hours. There will be a range extender available, but BMW engineers did not go into details on what small engine would be used to provide charging for the battery pack. But a whole host of issues arise (weight specifically) when discussing a range extender. Some of the issues would include, fuel storage, cooling (would it be water cooled), and other items required to support the operation of the engine. I would not expect it to be a variant of the 500cc per cylinder architecture they recently unveiled. In fact, I would almost expect some small industrial engine that is optimized around a specific RPM range to be utilized for range extension.

And the complexity that the additional weight of a range extender motor and its ancillary apparatus adds accentuates the care that was taken into ‘adding lightness’ in the base i3. Removing weight in a major component, such as an engine, allows you to shave weight elsewhere, and once the additional weight savings are realized, it becomes apparent that with less stress on other parts, those parts can have weight shaved from them. It’s a very beneficial cycle to indulge in.

However, BMW still has to provide the quietness and luxurious appointments owners of premium cars expect. And shaving weight aggressively can often mean thinner glass, less sound deadening material, and thinner carpeting, which results in a subsequent increase in NVH.

The nose of the i3 chassis showing the front suspension, steering rack, and bumper. The battery pack is the black object mounted between the ‘frame rails’.

But one thing in the i3’s favor is a lower noise floor to begin with. The electric motor has much less NVH than an equivalent IC engine and that reduces the need for hefty drivetrain isolation material. Also BMW engineers promised that the ecologically friendly interior materials would not only meet eco targets but also NVH targets and premium ‘look, touch, and feel’ characteristics expected of a premium offering. Without a chance to climb around on a pre-production model (what we saw was a look, don’t touch, concept), we’ll reserve judgement.

Another aide to reducing NVH is the separation of the drive, suspension and chassis from the passenger cell (what BMW has dubbed the ‘life module’). The passenger cell consists of the CFRP space frame and attached to it will be thermoplastic panels, which will form the outer skin of the vehicle. 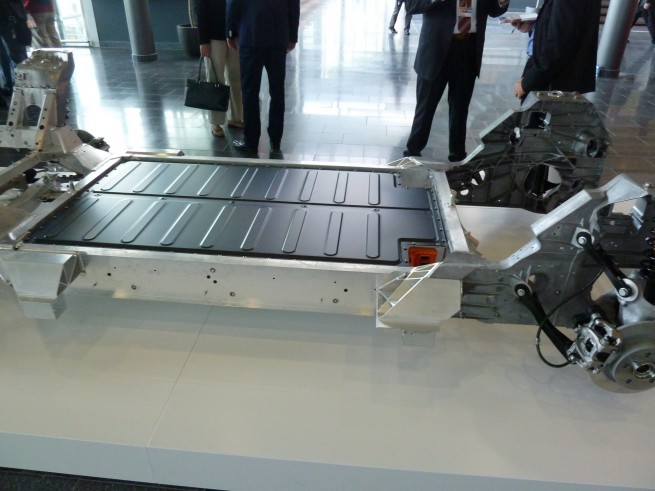 The rear of the i3 chassis showing the cast aluminum uprights that will house the rear suspension. The full battery pack can be seen between the ‘frame rails’, low and dead center in the car. Ideal placement of weight in a vehicle.

When thinking of the production version of the i3 don’t expect the large volumes of glass in the flanks seen on the i3 concept to carry over into production. There have to be operating windows and given a role in the American market, they won’t be Lexan. And that brings up the question of how much weight does the glazing add, power windows, locks, sound system and all of the other accoutrements required for a premium interior.

Again, sweating grams means something else when you are selling to a buyer used to hand wound windows than when presenting an urban car to an upscale buyer. 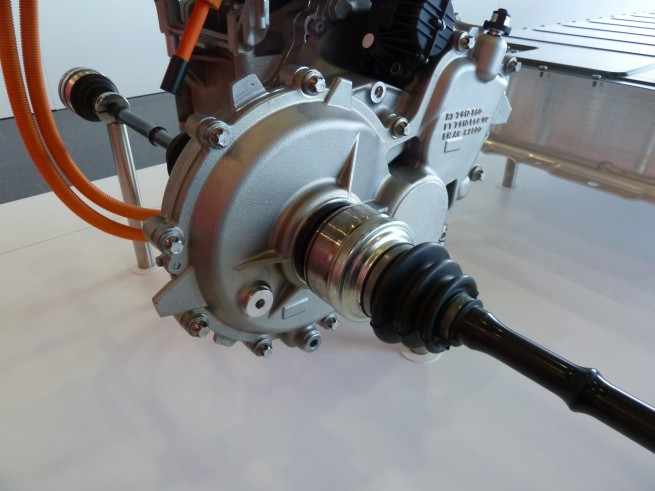 This is an interesting journey BMW has embarked on. Selling a premium ecological urban electric vehicle may not be the path to riches, based on the sales of other all electric cars. But BMW intends to do it their way, premium performance, even if it is compared only to a subset of urban optimized electric vehicles.

The i3, while still retaining BMW brand values, constrains them to a subset of the motoring experience. We don’t expect it to be a carbon copy of a 335i, for example, but rather something different – in a different environment, on a different scale. But we still expect it to be a BMW, even if that’s the BMW of electric cars. But, only by getting an opportunity to sample it in real world conditions will we know just how much ‘BMW’ BMW has put into the i3.