A maximum of 500 Nm torque and 340 HP may impress in numeric terms alone. Likewise, average consumption rates according to the ECE standard and 9.6 litres per 100 kilometres, as well as a crisp acceleration to 100 km/h in 4.9 seconds are all welcome statistics. But what about that genuine M feeling? What do the emotions have to say?

“The smile says it all…”

The community test drivers in Leipzig were very impressed with the drive. This is something that might surprise outsiders, however the reasons are clear:

M Button at the steering wheel

The BMW M hallmark is evident in numerous details: thus, the starting performance of the M TwinPower turbo engine was given an extremely spontaneous twist by redeveloping the mapping of the software. This is also helped by the approximately two kilogram lighter flywheel, which was also optimised for the maximum torque of 500 Nm. The M button on the wheel enables vehicle response to be further enhanced. With real fire in his eyes one of the community test drivers in Leipzig described this effect.

The precise steering responsiveness typical of M automobiles is assured in the BMW Series 1 M Coupé by the Servotronic speed-dependent hydraulic steering support – this guarantees perfect control and predictability thanks to a constantly exact feeling for the steering angle and precise response in relation to the state of the road. This enables the BMW Series 1 M Coupé to be steered with ultimate precision, something that is sure to being a radiant smile to every drivers’ face.

The characteristically powerful acceleration from even low revolution speeds, paired with an impressive rev performance and long-lasting thrust are enormously attractive and play a vital role in the exhilarating experience on the race track.

A button on the instrument panel enables the driver to activate the M Dynamic Mode (MDM): extended intervention thresholds for controlling driving stability and specifically applied over-steering take driving dynamism to the next level. Naturally, the DSC can also be fully deactivated, however it is advisable never to underestimate the spontaneous power of the BMW 1 Series M Coupé.

Newly designed piston rings are used in the engine. The two turbo chargers use turbines made from high tensile steel and will easily withstand temperatures of up to 1000 degrees Celsius.

The direct fuel injection contributes significantly to the high degree of efficiency of the engine, which uses Piezo injectors arranged centrally between the valves to ensure a particularly precisely dosed fuel supply.

The direct fuel injection contributes significantly to the high degree of efficiency of the engine, which uses Piezo injectors arranged centrally between the valves to ensure a particularly precisely dosed fuel supply.

The high degree of compression also increases the effectiveness. In addition, measures such as brake energy recycling and demand-controlled ancillary units are also used, so that the M engine of the BMW Series 1 M Coupé unites fascinating performance with great efficiency. This is something that will also be important for drivers with a sporting interest – after all fewer pit stops never did anyone any harm.

The compact six-speed transmission with dry sump lubrication is a new development. Its suitability for high torques is combined with a weight of just 43 kg – much lighter than similar gearboxes. The short M gear lever underlines the crisp and precise gear change – the traditional sportiness of this elite class.

Because the drive shaft is also a new part, every ing is specifically tailored to the requirements of the BMW Series 1 M Coupé in this combination, starting from the flange of the crank shaft.

The same also applies to the front-end, which is characterised by large cold air inlets. These ensure that plenty of cold air reaches the powerful in-line six-cylinder engine. Together with additional cooling components, this arrangement ensures the technology is kept at just the right temperature during competition.

In order to optimise the aerodynamic properties, so-called air curtains are used for the first time in a series-built car.

There is little doubt that the driver’s hearing adds to the emotion of the M Coupé: the two twin tailpipes of the exhaust system, the driving experience with a tailor-made, compact, minimalist sound, which is as lively as it is captivating. 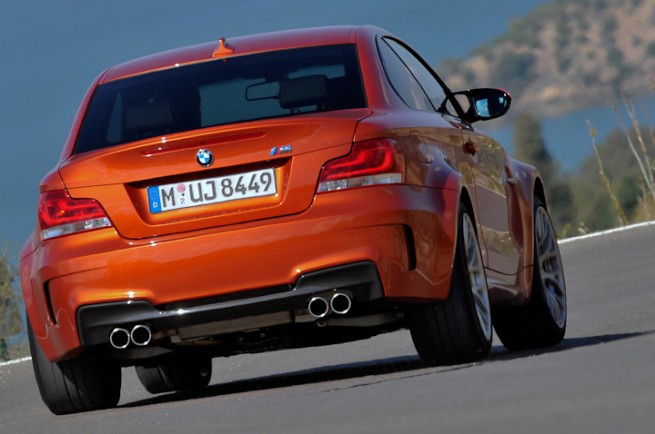 However, this BMW M is also absolutely perfect for day-to-day use: “This is all the more important because we expect that many BMW Series 1 M Coupés will be chosen as first cars,” explains developer Jürgen Schwenker.

Are features such as a genuine four-seat configuration or a 60:40 folding rear seat important? Indeed they are, because these advantages ensure that the BMW Series 1 M Coupé can be used on the street, while other cars are forced to wait in the garage for their next opportunity to be used.

It would also be a pity to miss a single minute of the pure driving pleasure the M has to offer.