In 2013, BMW turns another page in their long and prosperous automotive history. For the first time, a full electric BMW vehicle enters the production lines and a new eco-friendly sub-brand will join the extensive BMW family.

Initially received with skepticism, BMW Megacity Vehicle and Project i, has slowly become one of the most exciting projects inside BMW; engineers, designers, and executives, have begun to embrace the new direction and the thrill of building from bottom-up a new sub-brand, has conquered any fears they all might have.

This includes BMW’s Chief Designer, Adrian Van Hooydonk who repeatedly reminded everyone that BMW’s core values and DNA will continue to live in the new electric car. “Since we’re BMW, we don’t want to create just any old electric car. We want to deliver what people so far think is impossible: the combination of joy and zero emissions”, said design chief van Hooydonk for Business Week.

According to Van Hooydonk, Megacity vehicle will look and drive as a premium product, and will not be a compromise between looks, performance and safety. The car looks solid, with a higher riding position that inspires safety.

With countless hours and money invested in research and development, and recently field tests completed with the MINI E, the new Megacity family will drive BMW into a new segment where they intend to become the world’s leader in premium electric vehicles.

Internally, Project i is labeled as one of the most expensive projects ever initiated by BMW and with the economical downturn in 2009, the project was soon escalated to an even higher priority. Therefore, BMW has no room for mistakes and the foundation of this project was set in 2009 when the Munich-based automaker launched their first MINI E field test in the U.S..

“We were the first automaker to put 450 electric vehicles on US roads for daily use. We have gained so much insight into living with an EV with our MINI E pioneers over the last year,” said Rich Steinberg, Manager of Electric Vehicle Operations and Strategy for BMW of North America.

Soon, European countries join the MINI E program and a year later, the feedback received from customers and engineers, is being put to use in the next phase of the project.

Next in line, ActiveE. Launched at Detroit Auto Show this year in a concept form, ActiveE is based on the chassis of a BMW 1 Series Coupe and features a newly developed electric drivetrain and a lithium-ion battery-packed developed in cooperation with SB-LiMotive. 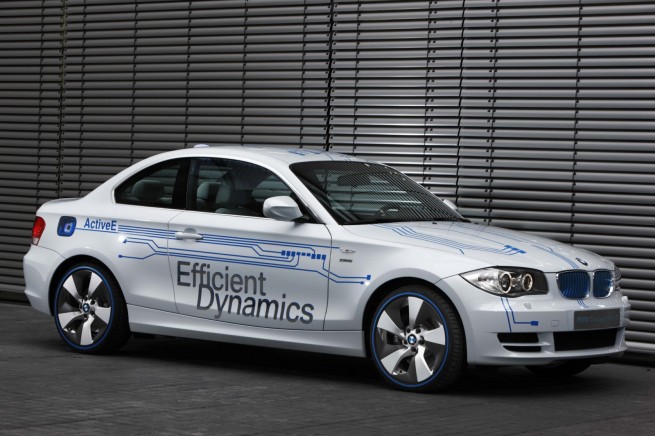 To better manage the risks and investments, BMW partnered with SGL Group to open a new plant that will manufacture carbon fibers to use in building lightweight cars. With carbon fiber parts produced in-house, BMW can optimize their production costs and control the pricing of its future electric cars.

Less dependent on suppliers, BMW can faster and easier adjust their base prices, as dictated by the market.

While two separate projects, both Megacity and Vision EfficientDynamics share some common values. First, both cars are using a layered design approach, for the first time featured on the VED Concept revealed last year. Second, through layering, both cars will create a visual lightness, along with physical lightness, in order to achieve the performance needed, along with low fuel consumption levels.

Two projects, two different audiences. One caters to mobility and urban environment, the other sends a message that a supercar status can be achieved with less horsepower and more innovation.

2013 is shaping to up be one of the most important milestones in BMW’s history and we believe the future looks bright for the Bavarian automaker.