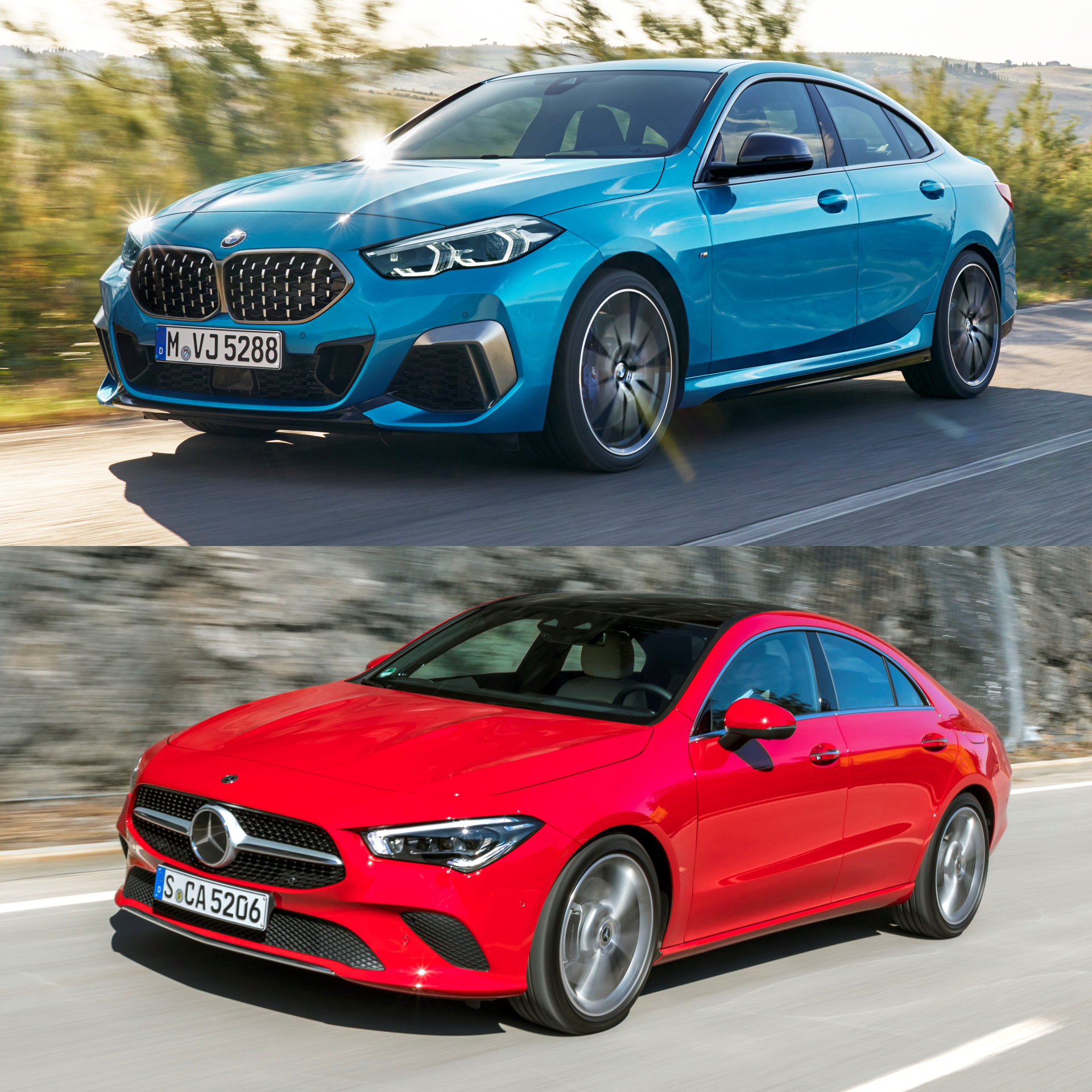 The all-new premium compact-sized four-door from Munich – the BMW 2 Series Gran Coupe – has just been revealed and it can already be distinguished as very a tough contender in the segment, claiming the top spot. Its main rival, the Mercedes-Benz CLA, has many reasons to worry about.

First of all, the F44 2 Series Gran Coupe wants to be the sportier option in the segment. Its exterior design exudes sportiness and dynamism in the most puristic BMW style. Even though the styling is now sharper, much cleaner and more precise, after seeing the first photos, we can conclude the new member of the 2 Series family is displaying a very expressive, intricate and cohesive design philosophy. 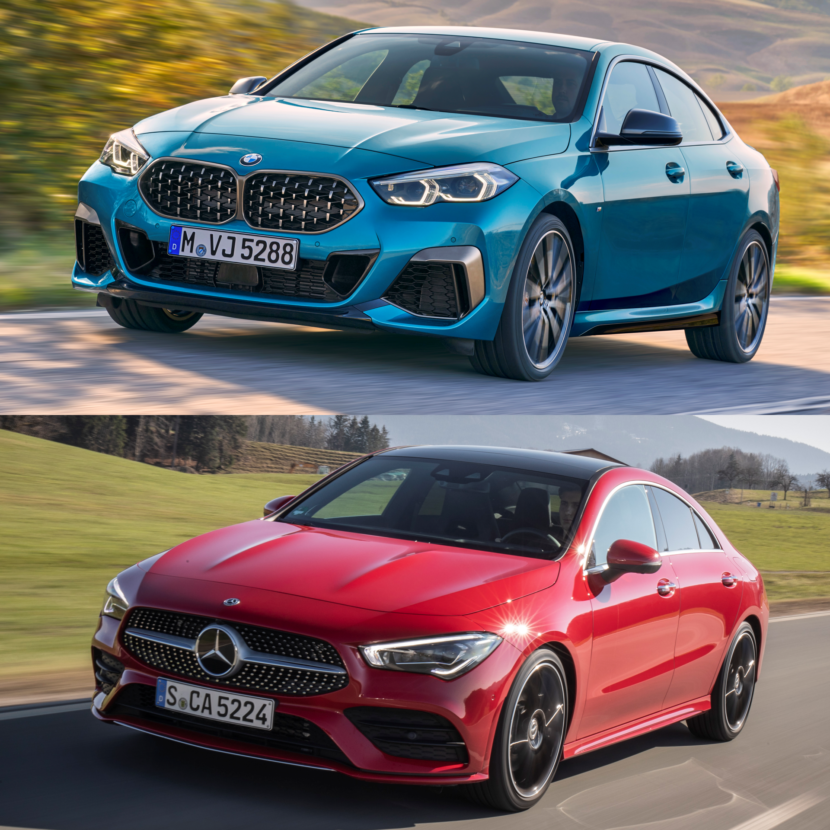 If we are to put the two competitors side-by-side, let’s first dissect the looks of the two front fascia. The most striking difference, besides the brands they belong to, is the expressivity of the front fascias. The front-end of the new F44 model series is derived from that of the F40 1 Series, but that is where the similarities stop.

The whole look is very muscular, looking poised to succeed. The standard full LED headlights with their impressive hexagonal filaments extend very close to the kidney grille and have a slight bulge beneath the most central light projectors.

The radiator grille is completely different from that of the 1 Series, while also being inspired by the 8 Series. While not being so slim, the kidney are connected in the middle and are widened to create a dramatic visual effect. The honeycomb pattern in the grille of the M235i model creates a particularly striking look. As well, the lower section of the front bumper has also been modified and it is now unique to the 2 Series Gran Coupe, bearing no reminiscence from the little brother F40 1 Series. 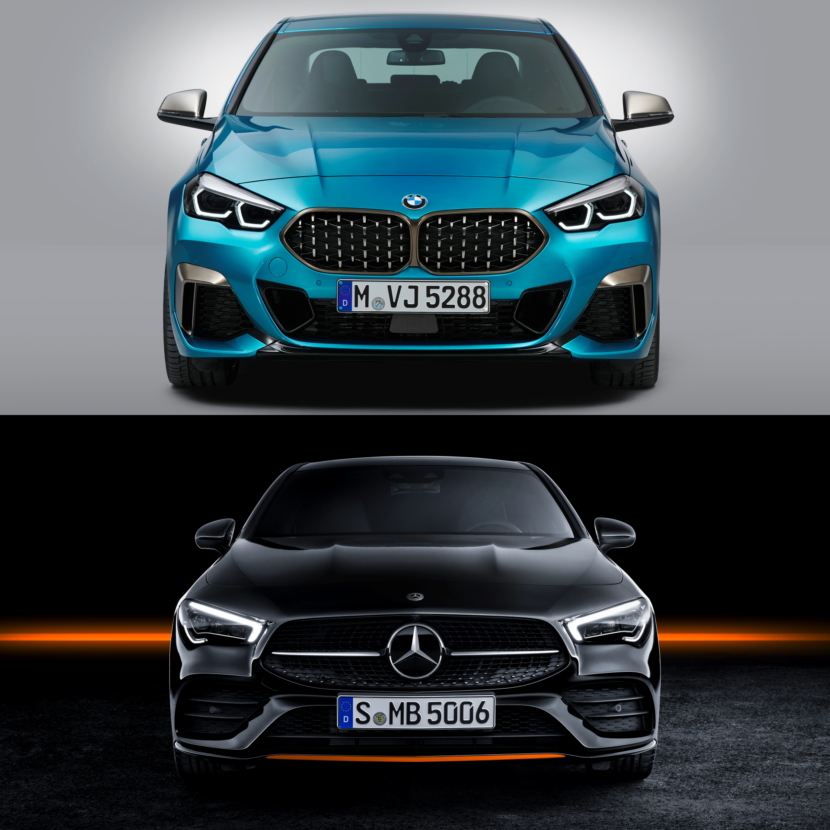 In the case of the Mercedes-Benz CLA, the front end, for the sake of (too much) simplicity is almost quasi-identical to the A-Class (W 177), even though we must be fair and recognize that the headlights look a little bit better than those of the hatchback model. Compared to the front fascia of the 2 Series Gran Coupe, the CLA lacks any visual, signature feature to create more passion. While it is a good design, it is simply nothing to write home about. It’s BMW that takes the win here, in my opinion.

The design show continues when looking at the two premium sedans from the side. It is rather unfair to compare two such fundamentally different cars, rooted from two opposite philosophies. But, as design is subjective and being biased or unbiased is hardly relevant in the end, I must confess that the CLA has done a pretty good at departing from the wobbly silhouette of its predecessor. 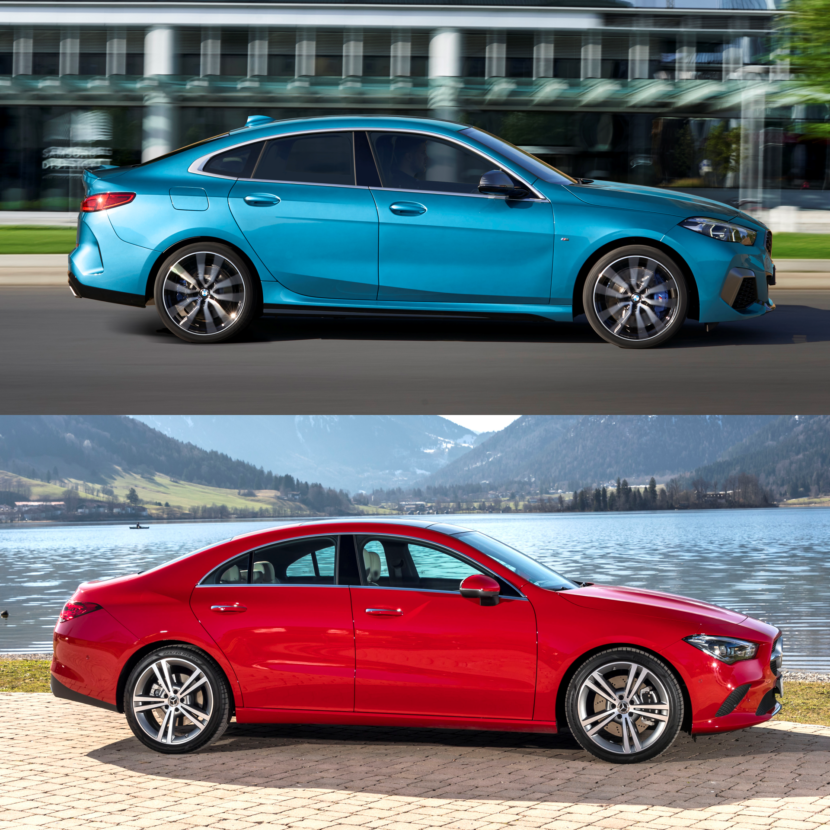 It is rather hard to decide between the two, but BMW somehow manages to be the eye-catcher in this game as well. Deeply rooted in its tradition, the Mercedes simply looks rather bland and uninspiring, while also being correct in styling and not overly styled. Too much of a bar of soap. Looking at the 2 Series Gran Coupe signals a fresher attitude, more presence and understated elegance, mixed with some precisely dosed inspiration from some its mighty ancestors: the 6 Series Gran Coupe, the 4 Series Gran Coupe and the 8 Series Gran Coupe.

As in the case of the CLA, which is nothing more and nothing less than a mini-CLS, the new 2 Series Gran Coupe could be fairly entitled a mini-G16 8 Series with its own personality. The window and shoulder lines and the characteristic Hofmeister kink are all designed in a new fashion, personal to the F44. It’s a toss here since both bring something new to the table. 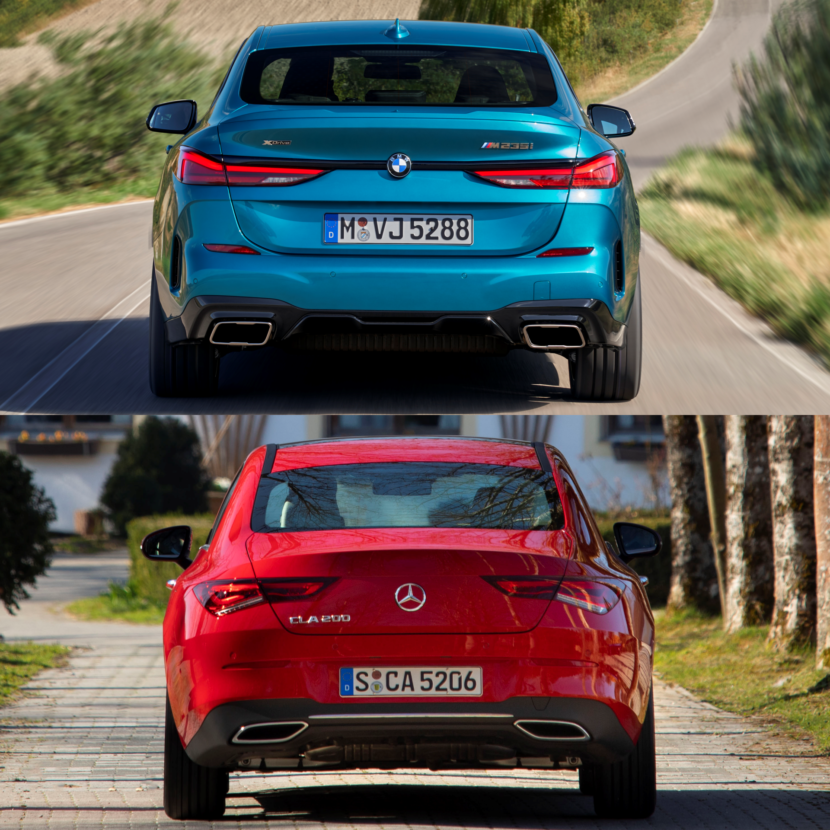 Moving on to the rear, the new 2 Series Gran Coupe completes its flamboyant design with an all new identity. The athletic LED taillights with “L” inner graphics design are extending very close to the middle section of the trunk gate, mimicking a mix between the 8 Series and new X6 rear light styles.

The license plate is mounted onto the trunk gate, while a horizontal metal bar in high-gloss black finish running between the upper creases of the rear lights adds balance to the whole design. On the other hand, the CLA comes up with a fairly similar treatment. Again, the similarities with the CLS are present here as well.

But, all in all, the Bavarian model is in the end the better, all-rounding choice in terms of styling. The exercise designers made has not been a compromise like in the case of the CLA. While the F44 bears some normal resemblances to other models from the portfolio, it still succeeds in displaying its own, puristic identity, a conclusion that cannot be drawn in the case of four-door coupe coming from Stuttgart.

Therefore, overall, I personally think that BMW takes the win in the exterior design department. 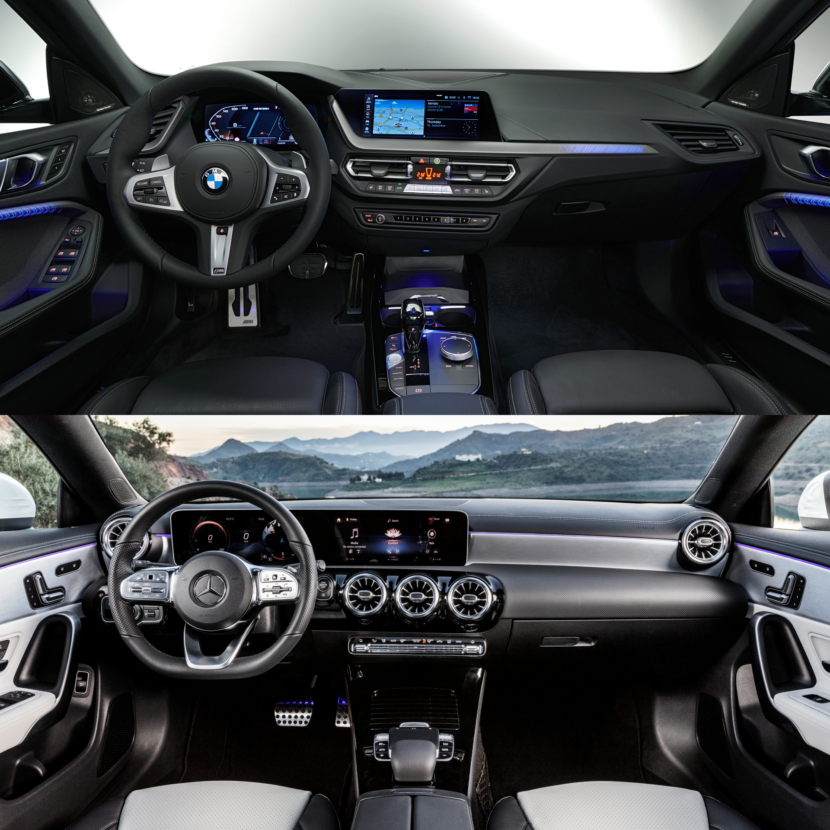 On the inside, the battle is even more fierce. The two contenders display two radically different philosophies. On one hand, it is the Mercedes-Benz CLA who marks a complete from outgoing model generation (C 117). The C 118 proposes a highly digitalized interior architecture, grafted from the A-Class.

The large slab of digital screens is inspired by higher-end models in the portfolio, such as the S-Class or E-Class which have adopted the same solution in the past. The MBUX infotainment interface can operated via the touch-sensitive central screen, via voice central or by swiping over the touchpad.

On the other hand, the new 2 Series Gran Coupe borrows its dashboard from the new 1 Series hatchback. While being virtually the same, the inspiration comes from the 3 Series, while the dashboard is designed in a more compact compact manner and there are quite many distinctive features to set this model apart.

The architecture is typical to BMW, with the central console oriented towards the driver. The carefully styled air vents and the character lines of the dashboard inspire more quality than the rather minimalistic look of the CLA interior. The materials used are of very good quality, which can be seen in the use of foamy plastic and high-quality leather, with just very few places covered in hard plastic.

The 2 Series Gran Coupe dashboard is colored in mainly dark and deep tones, compared to the CLA which can be configured with some brighter shades. The only choice for the F44 to go a bit more lively in terms of interior color is to spec it with Oyster or Magma Red leather upholstery.

As well, in terms of connectivity, the new Bavarian is offered with the latest BMW OS 7.0 infotainment system and can be optionally equipped with a digital instrument cluster doubled by the large-sized central display (in either BMW Live Cockpit Plus or BMW Live Cockpit Professional packages). 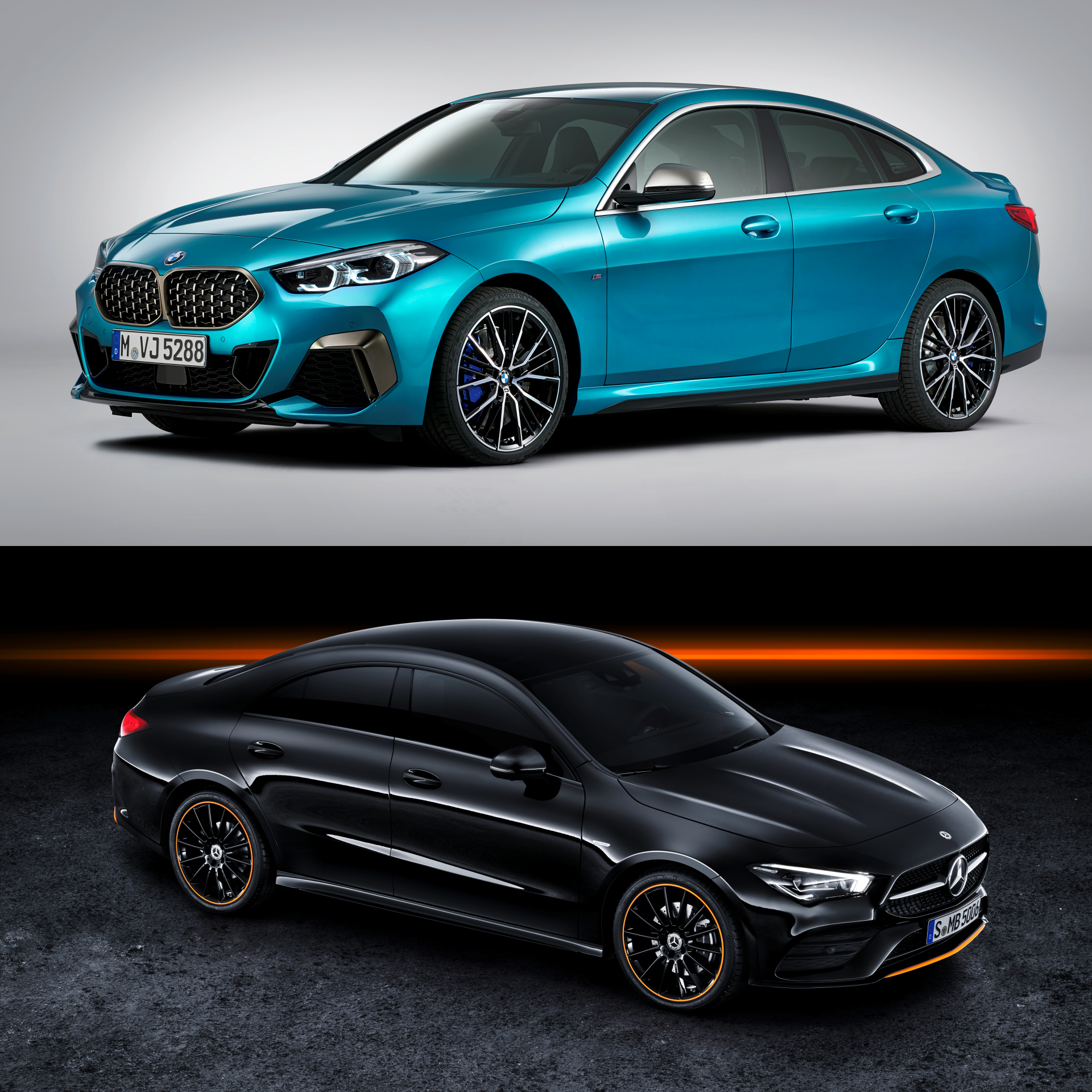 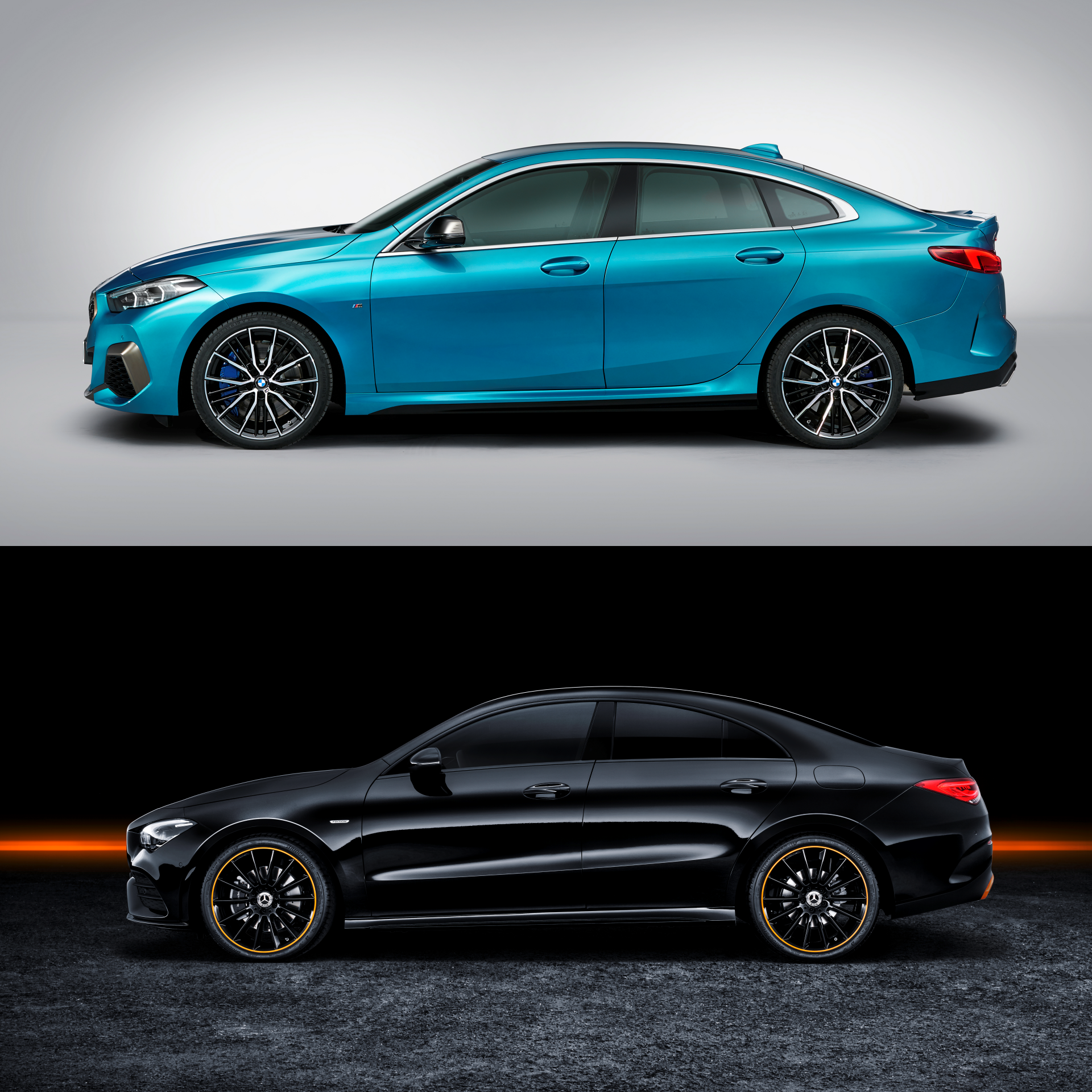 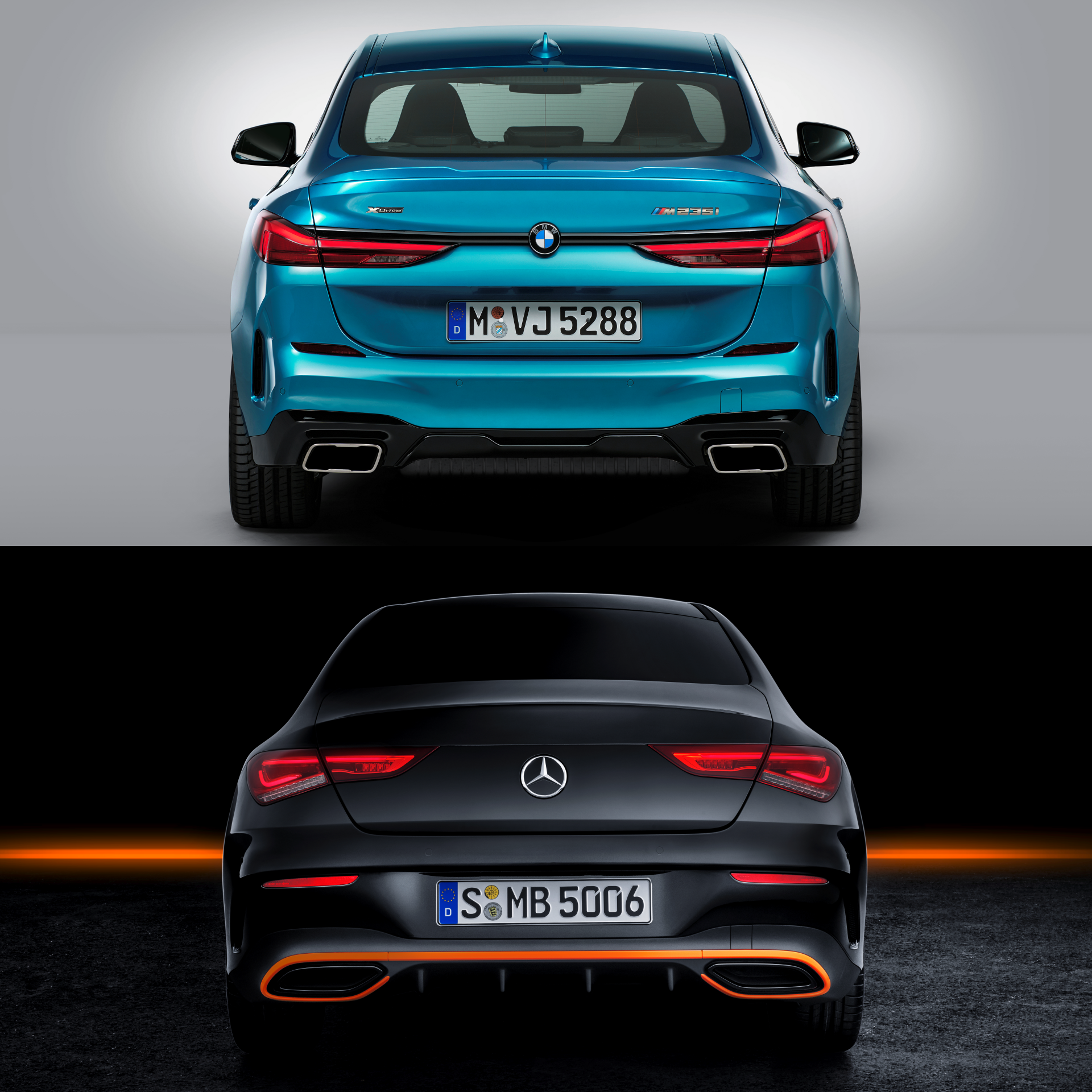 While the Mercedes does away with the centrally mounted gear selector, the BMW 2 Series GC remains faithful to a stylish electronic selector, borrowed from the newest models of the family. If I were to choose the interior that best suits my taste and needs, that would definitely be the that of the new F44: classic and, at the same time, digital in a reasonable. The CLA simply looks like a bad design exercise with the rather tasteless gargantuan screen and lack of passion transmitted by the whole interior architecture. 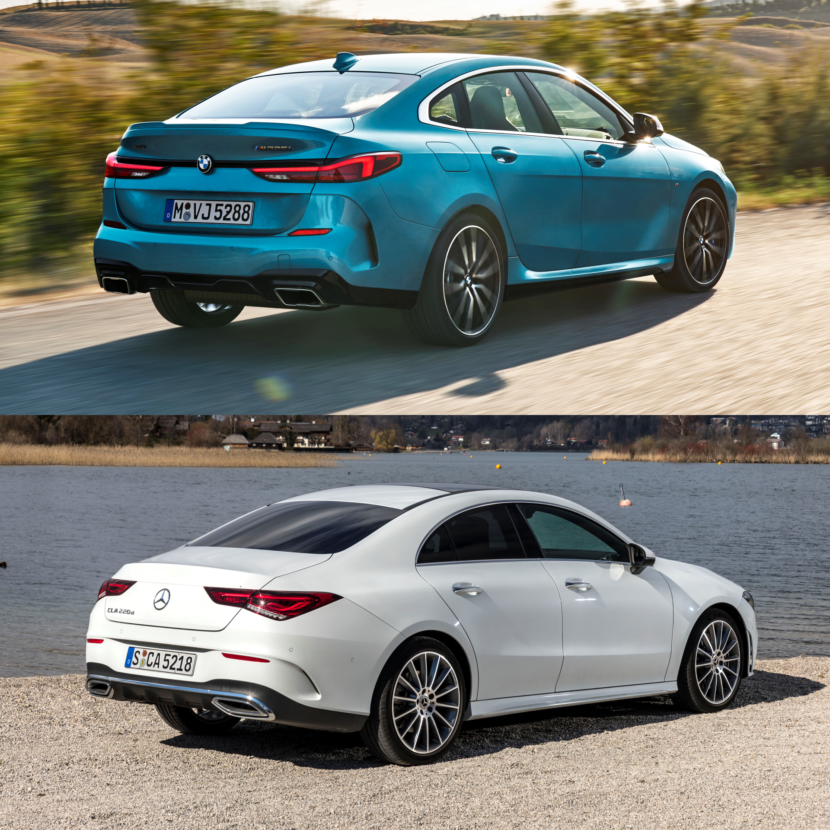 It is obvious that my winner of today’s comparison couldn’t be any other than the new BMW 2 Series Gran Coupe, which really impressed me positively in all aspects. Both objectively and subjectively put, the CLA will have some hard times ahead. If only would BMW consider a sports Touring version for the 2 Series Gran Coupe…

So, what do you think? Which is your favorite in this game?