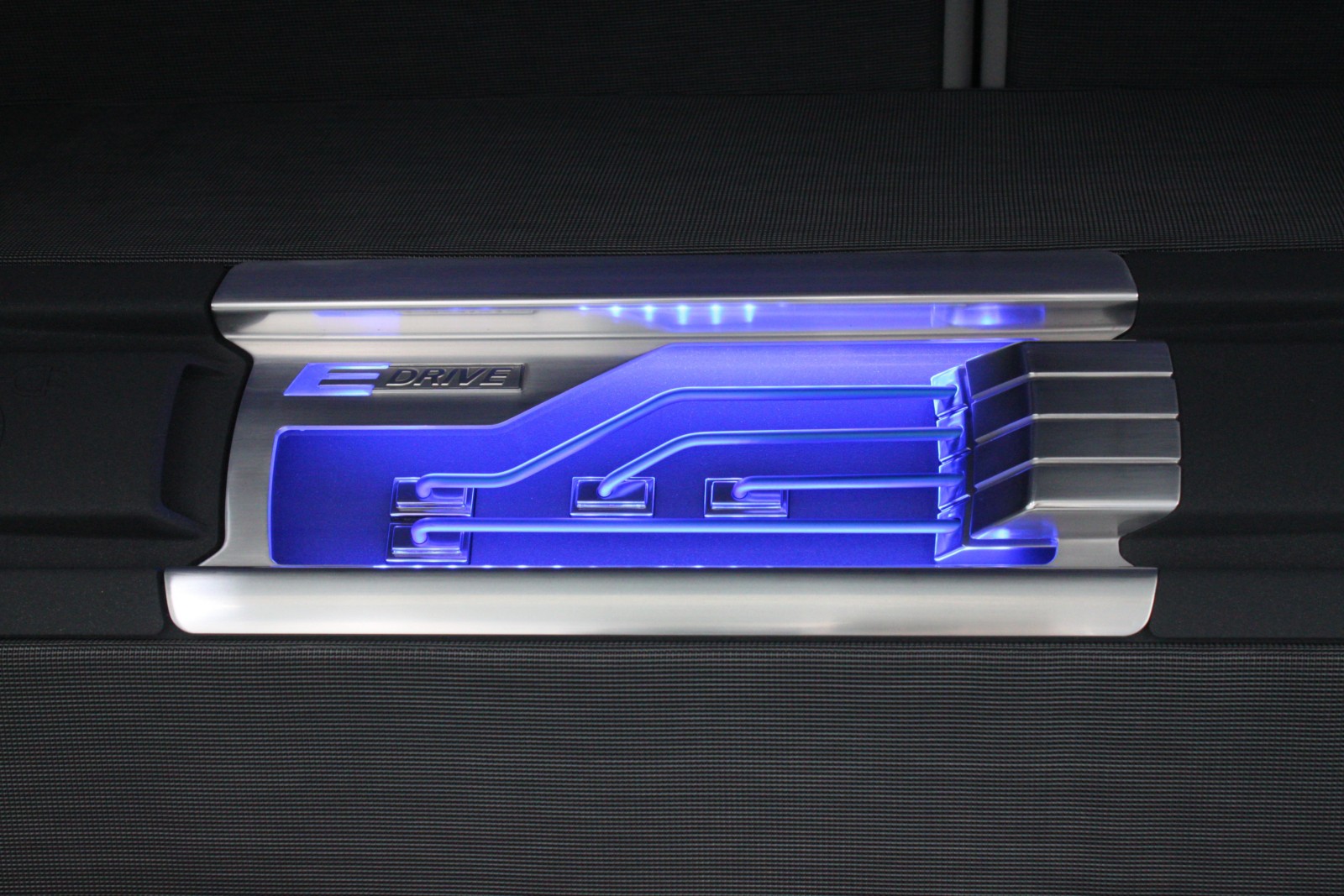 There was a charge in the air, and the world’s automotive media had the hair on their necks stand straight up. No, it wasn’t from a static charge, but rather the unveiling of BMW’s new electric car, the ActiveE. Detroit hosted the world debut of this new all-electric car and we are pleased to bring you the latest developments.

A New Mission, A New Mark

BMW is toiling through late nights with lots of coffee; working to set a new standard for zero emissions driving. Of course, to produce a world-leading car requires a wholehearted effort from everyone involved on the project. At the beginning of 2008 under “Strategy #1,” all facets of BMW’s organization were assessed, critiqued and improved upon. 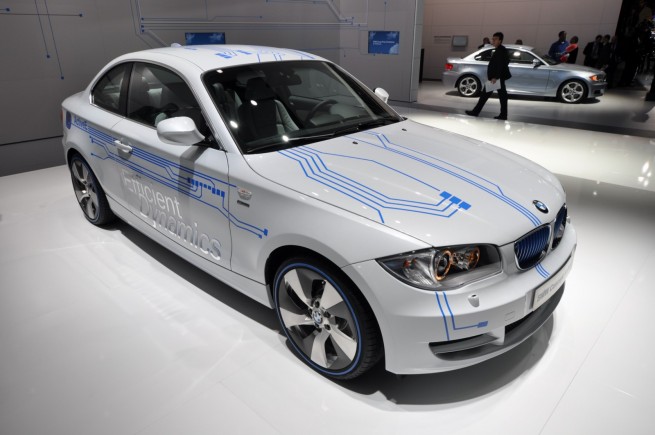 BMW’s marketing department, production systems, design house, engineering floor and distribution methods were all honed to run more efficiently and in unison with each other. Small teams were assembled and members were hand selected across the workforce, only the sharpest and most ambitious made the cut. One experienced person led each team, and a “think tank” approach was used to spawn new ideas, new solutions. Belts were tightened, ties were straightened, game faces were donned. BMW was quietly preparing itself for an all-out assault on emissions, and the results of this heightened effort are impressive. The stage is set to produce the worlds finest alternative energy based cars. To learn more about BMW’s new eclectic car, please read on.

The BMW ActiveE is a rear engine, rear wheel drive, all electric car. Based on the BMW 1 series, it uses the standard unibody frame, while heavily modified for its new propulsion systems. BMW have admitted that this is not the optimal design, as the new systems have been designed around the petrol-powered car. Despite this additional challenge, the ActiveE succeeds in its mission of sporty zero emissions motoring. Where the Mini E left off, the Active E carries on having learned many valuable lessons from a test fleet of 600 Mini E vehicles dispatched worldwide.

First of all, user practicality has been drastically improved with a massive 200L boot and a full rear seat for accommodation of four persons. The Mini E had failed in this regard with no rear seat and limited cargo space. The ActiveE is a higher class of car, positioned above the Mini as a premium sports coupe. Its rear drive, rear engine layout lends itself to traditional BMW handling and performance, maintaining a 50/50 weight distribution from front to rear. This weight distribution is accomplished through advanced battery technology in cooperation with SB LiMotive, BMW’s battery technology partner (for a more in depth look at BMW’s partnership with SB LiMotive, please hit the jump.

Batteries have been strategically placed throughout the car making use of redundant space where the drive shaft, engine and gas tank used to reside. Three separate battery modules are placed in these locations and feed power to the highly compact and lightweight, synchronous electric motor located in the rear axle. The advanced CPU is housed directly on top of the motor, and is responsible for intelligent energy use.

Battery technology in the ActiveE is highly advanced with prismatic laminar packaging, advanced warming and liquid cooling systems to maintain optimal battery temperature, and intelligent battery management all part of the design created in partnership with SB LiMotive. The chemistry of these Lithium Ion Batteries has been further optimized for optimal performance.

With 170 hp (125 kW) and 180 lb-ft (250 Nm) of torque available from 0 RPM, the ActiveE can accelerate from 0 to 60 mph in only 8.5 seconds – impressive for a daily driver that makes no compromises in terms of comfort, ergonomics, practicality and usable space.

An iPhone application has been developed for convenient and worry-free use of the new electric car. For instance, you can monitor your battery charge levels and respective driving range from a remote location as your car is charging. You can also preselect a temperature for the vehicle’s interior that will be maintained during charging. Upon arrival to your vehicle you can jump into perfect comfort – no need to burn valuable energy defrosting the windows or cooling or heating the interior while driving; thus all energy is used for propulsion and your ultimate driving pleasure. 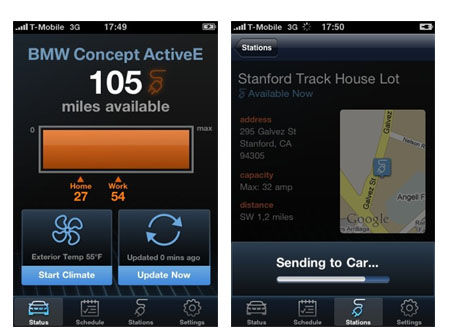 A very holistic approach has been taken to combat the ActiveE’s three archrivals: rolling resistance, aerodynamic drag, and weight. Every detail of the car has been given attention and improvements have been made in all these areas. Take for instance the ActiveE’s beautiful and highly aerodynamic wheels. Inserts on the leading edge of each spoke cut through the air, eliminating aerodynamic drag  on the wheels.

How much demand is there for electric vehicles in today’s market?

This is unknown for the time being, but feedback from BMW’s pilot project with the Mini E electric car has been promising. For example, BMW reports that its Mini E customers placed a high value on the nearly silent operation of the car. They also stated that the brake-energy regeneration made them feel like they were “pumping money into their vehicle every time they hit the brakes.” The low carbon footprint of this car was highly valued by those driving it and BMW told us that, “people are willing to pay to drive the future.” This is apparently true with a lease cost of $850 USD/month for the Mini E. The lease cost of the ActiveE is yet to be announced.

Joy is a core value of BMW’s electric drive vehicles, with a special focus on lightweight design and a high output of power and torque. BMW have promised us that their new electric cars will be fun to drive, and will embody typical BMW driving dynamics. We asked what attention is being paid to the sound track of future BMW electric cars and we were given the following answer, “artificial sounds may be produced for both the interior and exterior of the vehicle.” What type of sounds we don’t know – but my hope is this: BMW will amplify the natural sounds of the electric motor to produce the beautiful high-speed whine we often associate with turbines spooling up. Artificial sounds are best left on the shelf of music stores in my opinion – lets hear technology at work. 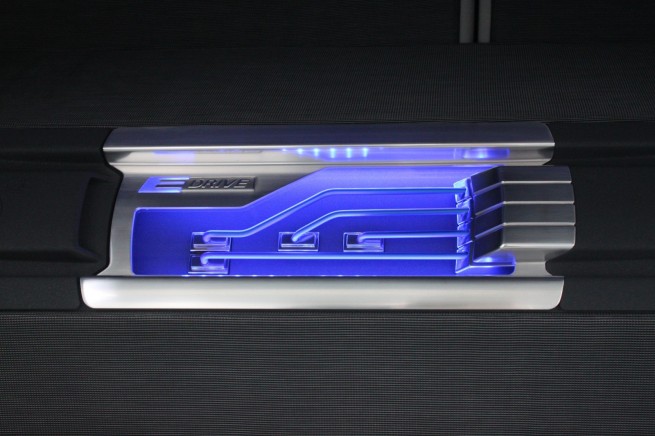 BMW has a rich history in electric car design dating back to 1972. In that year, BMW produced an electric car that served as a pace car during a marathon run in Germany. Later in the 1990’s an intensive program was launched to develop a fleet of 50 electric powered 3 series cars. Using Na battery technology, these cars accumulated hundreds of thousands of kilometers on the Island of Rugen in the Baltic Sea. This pilot project was not unlike the current Mini E or forthcoming ActiveE pilot projects.

Yes, BMW has always been thinking far in advance but due to political interference in the 1990’s, the electric car program was postponed. In fact BMW actually mentioned the now famous documentary, “Who Killed The Electric Car” during an Active E info session in Detroit. They mentioned that the political environment has changed drastically during the last decade, and the gates are now open to intensive development of alternative-energy drive technology. What remains to be secured are public charging networks that will eliminate the short to medium range limitations of current electric cars. BMW is working on both the political and corporate front to ensure all the pieces of this puzzle are in place for the roll out of their electric cars.

Of keynote was confirmation that the ActiveE is being developed “in parallel” with the Mega city vehicle and that the ActiveE Powertrain is being developed for use on the future Mega city vehicle as well – exciting news indeed.
A wave of change is upon us, and while others are getting swamped under the water, it appears BMW are surfing this wave to an exciting new world of automotive design.