BMW i5 Spied Near The Nurburgring With Slightly Less Camouflage

Home » BMW i5 Spied Near The Nurburgring With Slightly Less Camouflage 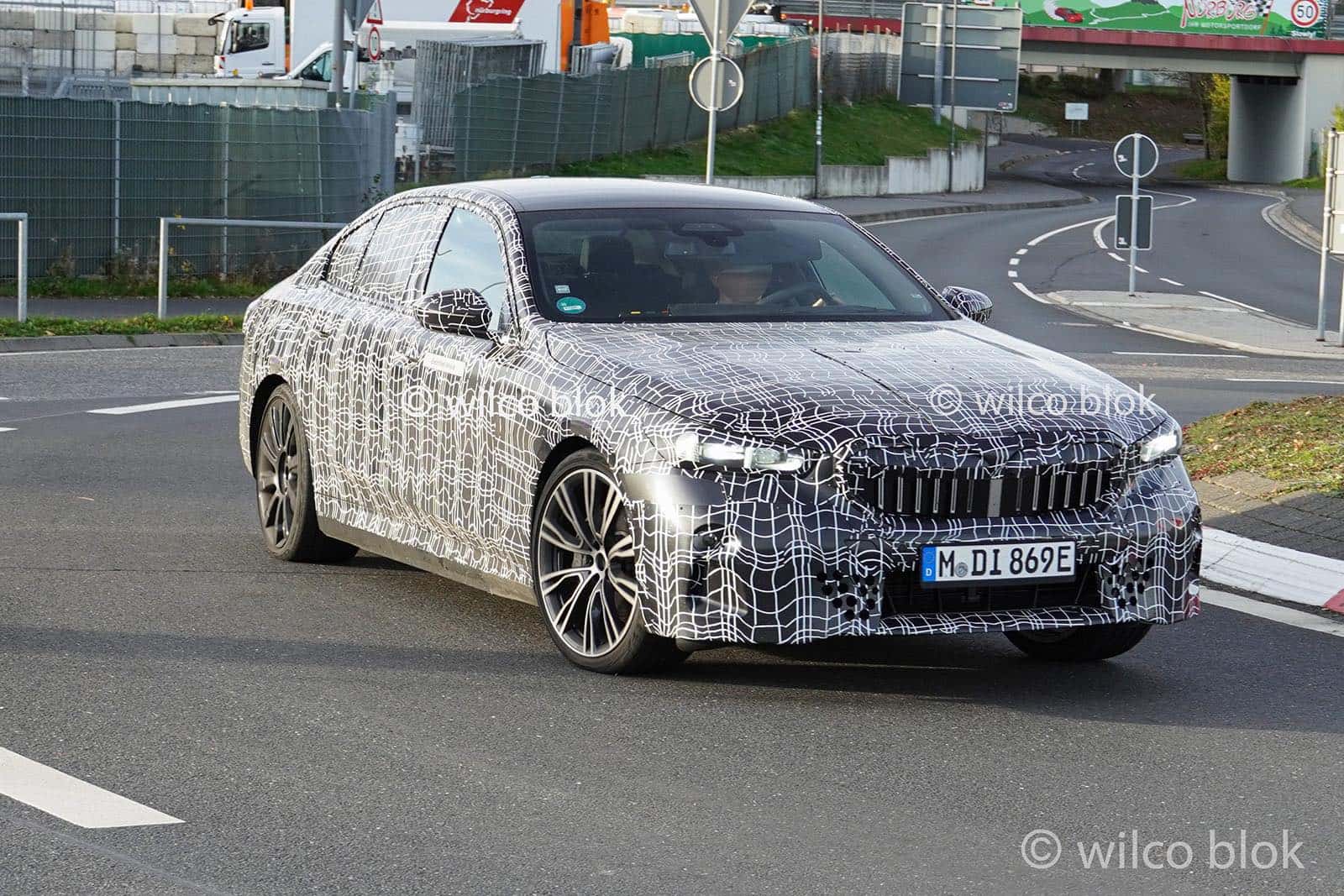 The most important product launch planned by BMW for 2023 is the 5 Series (G60), which will come along with this – the first-ever i5. The electric sedan has been spied near the Nürburgring with slightly less camouflage than before. We get the opportunity to see a good chunk of the front grille with its thick vertical slats and a chrome bar between the kidneys. The lower, separate air intake reveals the 5er won’t have a giant grille extending down on the bumper.

The prototype also had the production-ready headlights with sweptback clusters reminding us of the E60. The new lights appear to be slimmer than on the outgoing G30 and we’re glad they haven’t been split into two pieces like BMW has done on the bigger 7 Series / i7. On those bigger cars, the LED daytime running lights are positioned above the main lights in a separate cluster. That’s obviously not the case here since we can clearly see the DRLs within the same headlight assembly.

The side profile shows “Electrified Vehicle” stickers on the front doors, revealing BMW was testing the i5 version without a combustion engine. Despite the swirly camouflage, the new flush door handle design is easy to notice and should help improve airflow for better efficiency. At the upper corner of the rear doors, there’s an extra piece of disguise to mask the redesigned Hofmeister kink.

Moving at the back, the same “Electrified Vehicle” lettering reiterates the prototype was an EV. The license plate ending in “E” and the lack of an exhaust are also telltale signs BMW was out testing the i5. Peeking through the disguise are wide taillights with double horizontal bars substantially different than other sedans from Munich.

Although the interior was not captured in this set of spy shots, we still can take a peek at the cabin and get an idea of the redesigned dashboard. The eighth-generation 5 Series will transition to the Operating System 8 with side-by-side screens. The driver’s display will likely measure 12.3 inches while the touchscreen is going to have a 14.9-inch diagonal. The latter is expected to incorporate the climate controls considering the 3 Series and 7 Series have lost the physical buttons and knobs for the HVAC.

BMW will introduce the standard 5 Series Sedan and i5 in the first half of 2023, with the Touring (G61) to arrive a few months later. China will get a long-wheelbase 5 Series Sedan (G68) in early 2024, and later that year, the M5 is scheduled to arrive in both saloon and wagon body styles. Rumor has it an i5 Touring is also in the works.