This week might be mostly about the new XM and a little bit about the Z4 LCI, but let’s keep in mind BMW is now selling the M3 Touring for the first time ever. One of the nicest G81 specs we’ve seen so far is this super wagon painted in Frozen Pure Grey metallic, a matte color from the Individual catalog. You’ll also notice the 50 years of M anniversary emblems and optional adaptive headlights, but there’s more to this car than that.

The gold calipers tell us the M3 Touring has been configured with carbon-ceramic brakes, which typically come along with the M Driver’s Package lifting top speed from 155 mph (250 km/h) to 174 mph (280 km/h). That said, you can get the upgraded brakes as an individual option, and it costs a steep €8,800 at home in Germany. While the M340i and M3 Sedan get a carbon roof, the lightweight body panel is not available on the equivalent Touring models. 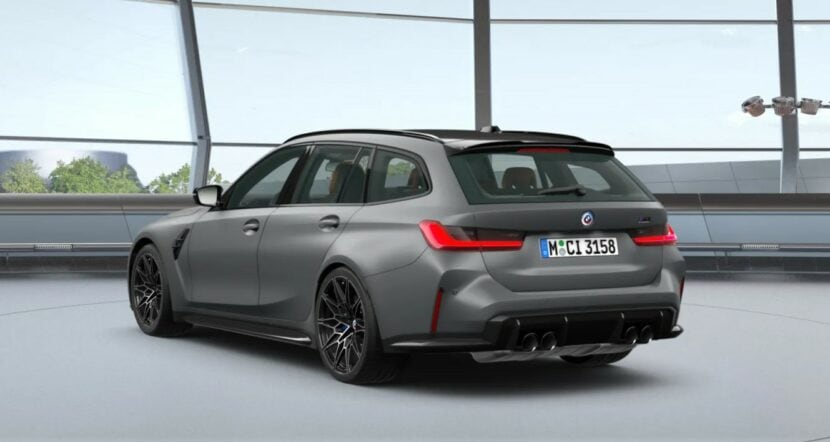 As for the interior, it’s also far from being standard. For starters, it boasts the full Merino Tartufo Individual leather upholstery and comes with the optional carbon fiber trim.  The cabin is more about luxury rather than sportiness since it has more comfortable seats rather than the bucket ones. Chances are not many people will opt for the body-hugging seats since the M3 Touring is for the family man who wants a do-it-all car rather than a more focused track machine.

The automatic gear lever sticking out is an M3-only affair considering the lesser 3 Series LCI models – including the M340i – have BMW’s newer and much smaller gear selector. While the M3 Sedan and M3 Touring haven’t technically gone through a Life Cycle Impulse – same lights and bumpers as before – the dynamic duo does get the iDrive 8. The newer infotainment comes along with a simplified center console as the climate control buttons have been deleted.

It is believed an actual LCI is being worked on for the M3 Sedan, which might be carried over to the M3 Touring as well. In case you haven’t heard, BMW has apparently decided to build the G20 3 Series and all of its derivatives until 2027, or two additional years than originally planned.