BMW XM vs. Ferrari Purosangue: Exclusivity at its finest

Home » BMW XM vs. Ferrari Purosangue: Exclusivity at its finest 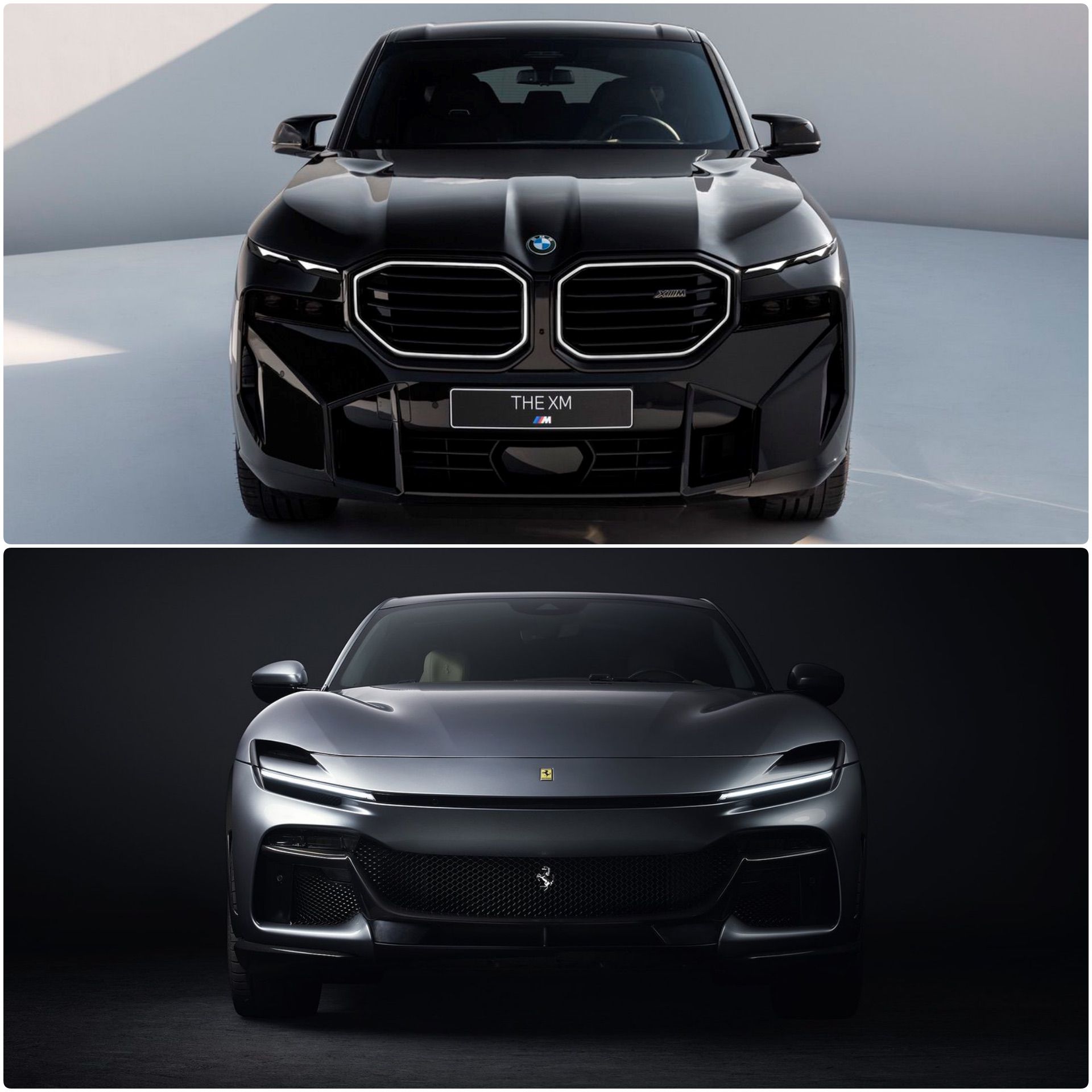 Comparing BMW and Ferrari might seem as a sacrilege to many die-hard Italian and German fans of the two brands. Moreso, bringing two organically different models side-by-side in a visual comparison seems even more controversial. With the Purosangue, Ferrari takes its first taste of what should be an SUV – in theory, only that it does in its own Italian fashion. On the other side, the XM, even though a first within the BMW lineup, is the product of more than 20 years of relevant experience in the world of SAVs. 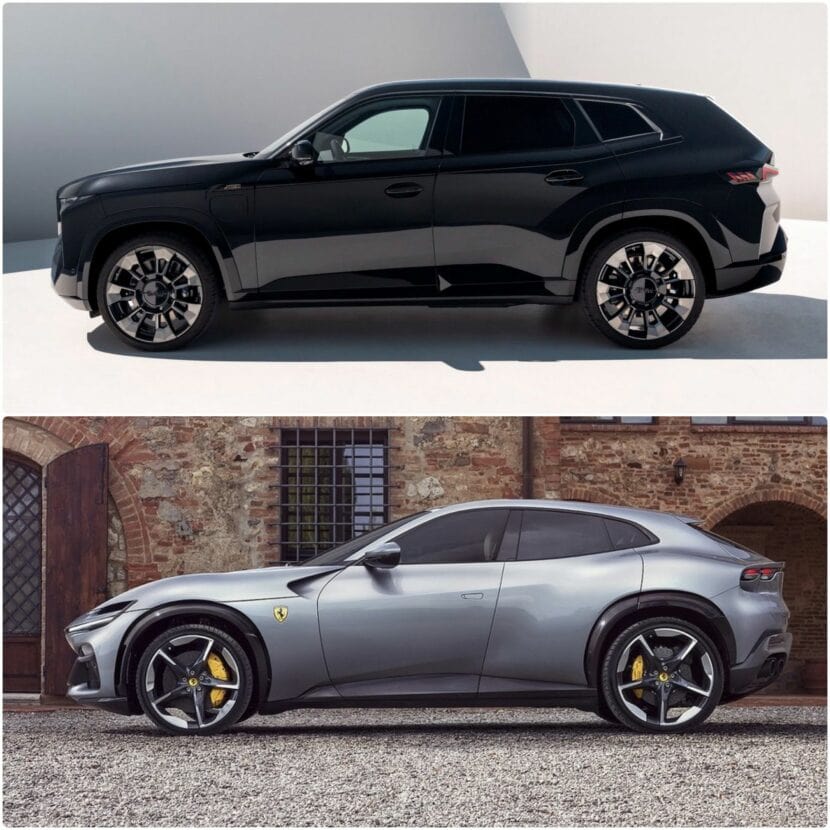 When seeing the two models together, the difference is pretty much striking right away. Ferrari, without looking less prominent, feels a bit soft in comparison with the XM. Of course, it is in the Ferrari DNA to adopt a curvaceous, dynamic styling. In the case of the XM, the monolithic design was chosen to create an even more powerful statement.

The faces of the two vehicles stay true to each other’s house brand and philosophy. In the case of the XM, the front fascia is dominated by the split headlights (with the blackened out lower unit), the trapezoidal kidneys with horizontally-placed double louvres and illuminated contour and the huge air inlets in the front bumper. The Ferrari is more classic in its approach, while also proposing a unique split headlight design. The face of the Purosangue is less cladded and more clean than in the case of the XM. 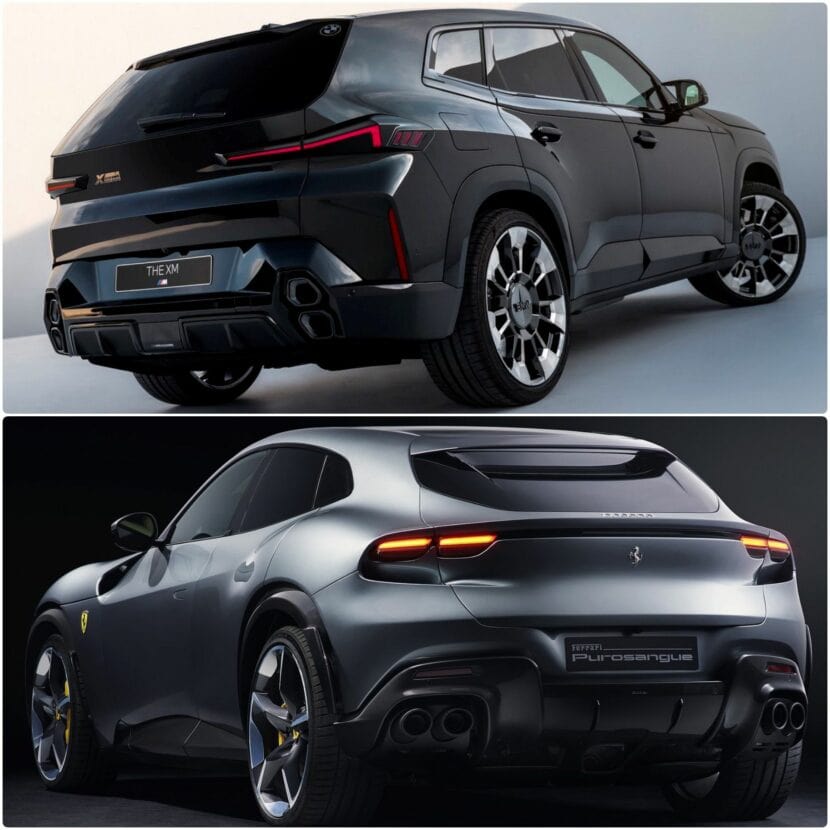 Even at the rear end, the Ferrari 4-door / 4-seater model is more or less an evolution of an already tested recipe. The four tail lights are further streamlined and hark back to older models. The round quad exhaust pipes also speak about the rough potency of the V12 lurking underneath the engine bonnet.

At 4.97 meters, the Purosangue is visually and mathematically shorter than the XM with the 5.11 meters. The Bimmer impresses with sheer rock-solid and complex design and stance. The German is also slightly taller than the Italian: 16 centimeters separate the two contenders. Admired from their sides, both vehicles expose a sheer dose of elegance and beauty true to their very unique design schools. 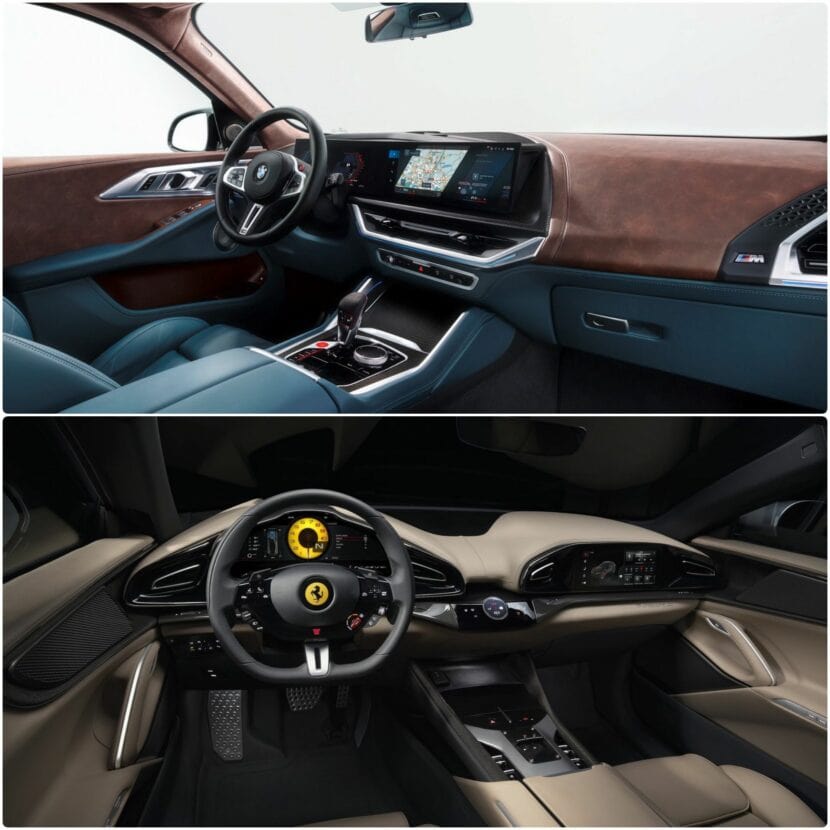 When it comes to interior, BMW and Ferrari go along distinct paths. The XM is a combination of both classic and futuristic elements. The digital Curved Display is borrowed from the X7 alongside with its typical dashboard integration. At the same time, the G09 XM does away with many buttons, yet holds on to the traditional ///M gearstick and the useful BMW iDrive controller.

The upper part of the dashboard and door covers is dressed in a refined Coffee Brown Vintage leather, while the rest of the interior is adorned by a beautiful, eye-catching BMW Individual blue leather upholstery. The deep recesses of the rear seats and the Alcantara headliner further round off the majestic experience aboard the XM. The standard Harman Kardon 16-speaker system or the optional 20-speaker Bowers & Wilkins Diamond system further enrich the audible atmosphere in the G09.

In the Ferrari Purosangue, the design of the dashboard makes a powerful statement about the Italian model. The architecture is characterized by the presence of two cowlings, one for the driver and one for the passenger, housing the digital instrument cluster, and respectively, a digital information panel. The physical controls are reduced to the minimum, as the Purosangue premieres some capacitive buttons on the minuscule center console.

The 4-seater Ferrari comes up with 4 individuals seats, shaped like a shell and covered in the finest leather. Given the smaller footprint of the Purosangue compared to the XM, the cabin should feel a little more cramped, but the seats will certainly provide utmost comfort and create an individual space for each occupant.

The XM premieres the M HYBRID powertrain architecture by mating a 4.4-liter V8 petrol engine with an electric motor, also ensuring emission-free capabilities. In the XM LABEL RED, the range-topping G09 model to be unleashed in 2023, the powertrain will be good for no less than 748hp.

The Purosangue, as its name signals, was created to bring pure joy to traditional motor enthusiast, as it doesn’t abandon the classic V12 petrol-fed engine with a humongous displacement of 6.5 liters. An electrified Ferrari would rather be out of this world and pretty much unlikely, in the medium-to-long term, if we are to believe rumors. Anyway, it is good for 715 hp.

Considering that the Purosangue, at 2,033 kg, is a tad lighter than the XM at no less than 2.7 metric tons, the performance of the 12-cylinder unit does wonders and likely come on par with the more advanced M HYBRID powertrain installed in the G09 generation. 3.3 seconds are needed to reach 62 mph in the Ferrari, whereas the BMW is 1 second slower at 4.3 seconds.

Conclusion: does it matter who’s better?

Like in the comparison with the Bentley Bentayga, it gets even trickier to draw a definitive conclusion in this case. Both the Ferrari Purosangue and the BMW XM are wheeled testimonials of passion put into creating some of the most refined and outstanding automobiles in the world.

Ferrari caters to a specific clientele, which certainly will never buy a BMW. In the same way, this is also true the other way round, in most situations. At least visually, the Purosangue might be just an inch ahead for many (thanks to its slightly more dynamic and elegant design), but beware the brutal XM is approaching. For me, however the BMW manages to stir my imagination, in a sense that baffles me. But in the end, a comparison between a Ferrari and BMW is not fair.