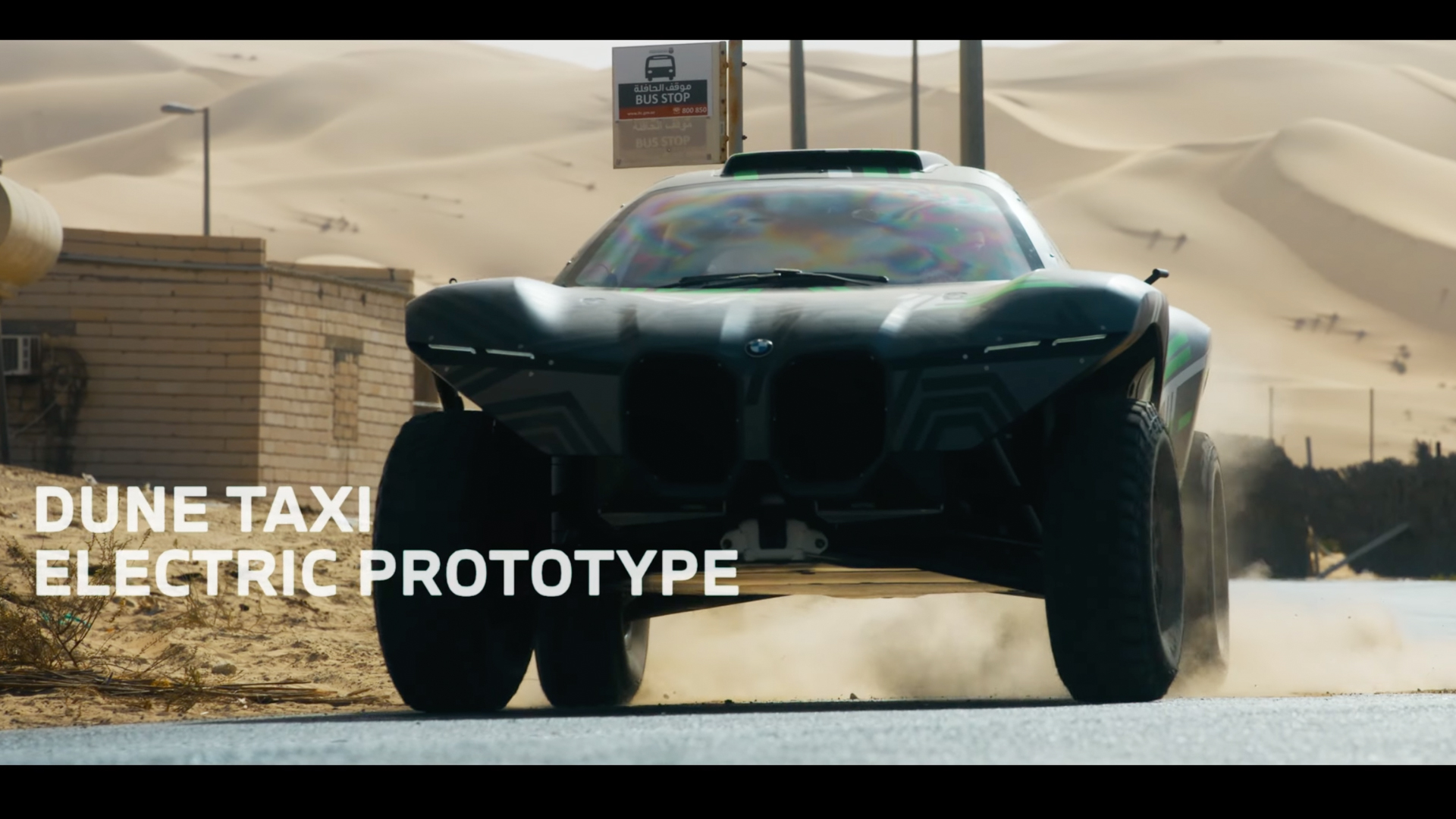 BMW just dropped a video, along with some Instagram videos from one of its designers, of an all-electric off-roader that can handle the dunes of the desert every bit as well as it handles the road. Little is known about what BMW calls a ‘Dune Taxi’ or what it’s for but it does provide a few specs and it looks awesome. In this new video, which features actor Madelyn Cline (Outer Banks) and rally championship driver Abdo Feghali, the BMW Dune Taxi rips up the desert alongside some other BMWs.

What is the BMW Dune Taxi?

Good question. We’ve been putting our feelers out and haven’t received a concrete answer from any of our sources. So we don’t know how long BMW has been working on this project, what it’s for, or if it will actually be used in any official motorsport. All we know is that it’s an all-electric, purpose-built desert racer, similar to what you’d see in the Dakar rally and that, according to BMW, this Dune Taxi is a combination of all of BMW’s technologies: BMW M, BMW i, and BMW X.

We do know that its body is made from NFRP (Natural Fiber Reinforced Polymer), its dual electric motors make 400 kW (536 horsepower) and 1,000 Nm (738 lb-ft) of torque, and it will have 400 mm of wheel travel. It looks immensely capable in the sand in this new video and looks like an absolutely blast to drive. It even looks fun to drive on the road, where its massive ride height allows it to cruise over speed bumps at high speed without even noticing them.

Later in the video, the Red Bull Drift Brothers show up in BMW X6 Ms set up for desert racing and they all have some fun in the sand. Again, not quite sure what the point of all of this is but it’s certainly cool to watch.

You’d imagine seeing a vehicle like this would indicate BMW’s interest in an all-electric Dakar rally racer, similar to what Audi recently did. It would make sense, as many brands are trying to advance electric vehicles in any motorsport they can find. Plus, the grueling conditions of Dakar not only allow brands to test their EV tech to the limits but also gives them a better understanding of how to handle certain problems. Motorsport has always been the greatest driver of road car technology, so why not enter as many races as you can?

We’re absolutely intrigued as to what this car is, what it will become, and what BMW’s plans for it are. However, we’re as in the dark as you are at the moment. But you can be sure we’ll keep you posed as we learn more.