BMW took its sweet time coming after the Mercedes GLS with a three-row SUV but the luxobarge finally arrived in late 2018. Interestingly, the posh people mover manufactured in Spartanburg has already been subjected to a Life Cycle Impulse, a radical one at that. A new video depicting the xDrive40i shows how the front fascia has been transformed from one model year to another.

BMW of Bridgewater from New Jersey has both the 2022MY and 2023MY to illustrate how the split headlight design has dramatically changed the X7’s front end. Beauty is in the eye of the beholder, but we can all agree the fullsize luxury SUV now has a bold face. The front bumper has also been reshaped, although few will care about the modifications since the separate lights grab all the attention.

Rarely has BMW made such a drastic design change for only an LCI, a change that feels just as substantial for the 7 Series G70. The production-ready XM arriving later this year will also have an upper strip of LED daytime running lights separate from the low/high beams, but that’s not to say all of the company’s models will adopt this look. Spy shots have revealed the facelifted X5 and X6 won’t have this setup, nor will the next-gen 5 Series G60. 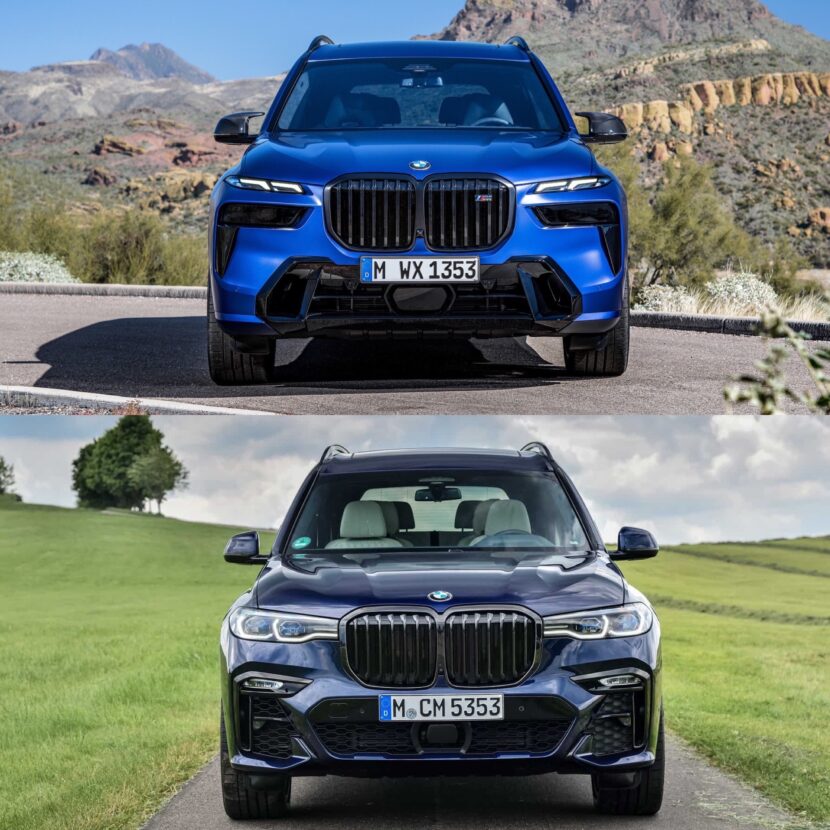 The love/hate lights are only half of the X7 facelift’s story as another major change has occurred inside the cabin. Much like the 3 Series LCI, the big SUV gets the Operating System 8 with a 14.9-inch touchscreen for the infotainment. It sits alongside the 12.3-inch driver’s display, and both are incorporated into a piece of curved glass that sticks out from the dashboard.

The cabin has been subjected to additional tweaks, including redesigned air vents and an illuminated ambient light bar on the passenger side. It shows the “X7” logo on this xDrive40i, but opt for the M60i and it’s replaced by the letter “M.” A more substantial novelty is BMW’s decision to delete the large gear lever of the automatic transmission and opt for a smaller switch you’ll also find in the 3 Series LCI, which has also transitioned to the side-by-side screens.