The quintessential BMW for many European families, the 3 Series Touring in the 320d guise has received a mid-cycle facelift along with the entire G20/G21 family. With good reason, the M3 Touring has been getting most of the attention in recent weeks, but the bulk of the sales will be represented by these lower-end models and the 320d has always been a popular choice.

Painted in a rather mundane gray color, the long-roof 3er is an M Sport model, hence why it features the anniversary emblems to mark 50 years of M. The retro-flavored logo has been applied at the front and rear as well as on the wheel center caps, but the steering wheel has the regular BMW roundel. 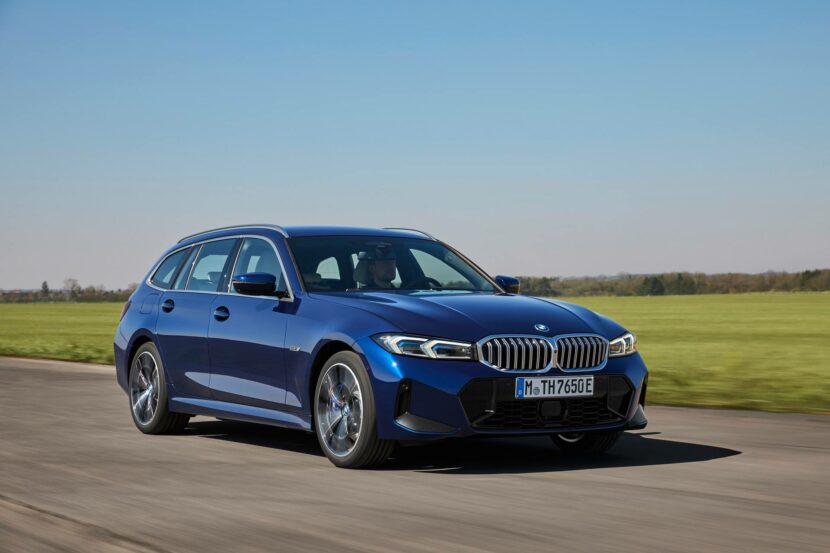 This rear-wheel-drive 320d rides on the optional 19-inch Jet Black alloy wheels in the 791 M style with a double-spoke design and run-flat tires. The dark alloys are contrasted by M-branded red brake calipers that come with the M Sport you don’t get on the base Sport trim level. Whoever ordered the car played it safe with black leather upholstery and no optional panoramic sunroof. As with all 3 Series models currently in production, the 320d Touring gets the Operating System 8 with a 12.3-inch driver’s display and a 14.9-inch touchscreen.

Offered exclusively with the eight-speed automatic transmission, the 320d has retained its 2.0-liter turbodiesel engine. However, the LCI has brought a mild-hybrid 48V system to cut emissions and fuel consumption and help BMW meet increasingly stringent regulations in the European Union. In this slightly heavier Touring body style, the oil-burner produces 190 horsepower and 400 Newton-meters of (295 pound-feet) torque for a 0 to 62 mph (100 km/h) in 7.2 seconds and a top speed of 142 mph (229 km/h).

The 3 Series Touring in the 320d flavor remains a solid all-rounder, offering heaps of practicality and excellent fuel economy. With the recently launched LCI, it’s now packing more tech than ever before and prices continue to creep up, but that’s a problem with virtually all new cars.