The Concept XM represented the dawn of a new era as the wildly designed SUV signaled BMW M’s transition to electrified powertrains. The production model will hit the assembly line late this year before the M5 will inherit the same PHEV setup in 2024. Meanwhile, the performance sedan has been caught leaving a testing facility in (almost) complete silence.

Yes, it would appear the heavily camouflaged prototype went down that ramp in purely electric mode. The sounds you’re hearing are coming from the chunky winter tires hitting the paved road. The electric motor’s whirl is audible for the first seconds before the V8 kicks when the M5 reaches higher speeds. Chances are the combustion engine in question is the long-rumored S68 debuting with the XM. 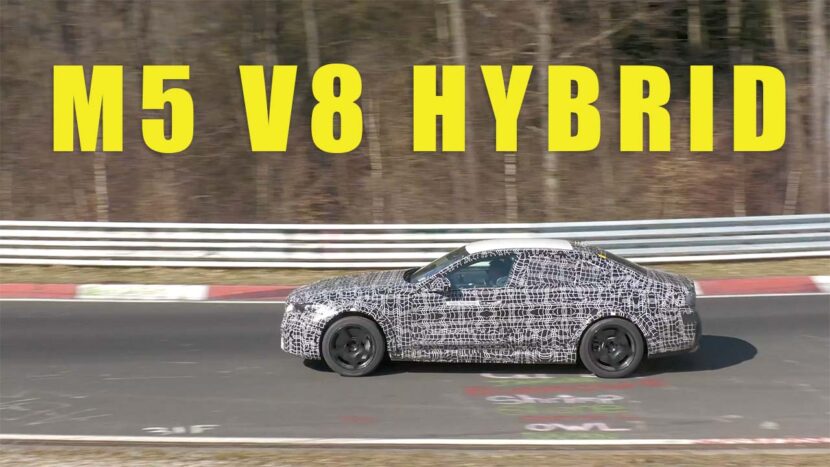 The twin-turbo ICE will work with the e-motor to deliver roughly 750 horsepower to mirror the Concept XM. You can easily hear the gasoline-fueled unit when it’s fired up and it sounds rather lovely we might add. It’s especially true when the super sedan is caught stretching its legs on the roads of the German countryside.

The BMW M5 Will Keep The V8 And Add Electrification

That’s certainly a V8 under the hood, one expected to make 600 hp in the X5 M and X6 M LCI models. According to the latest report, it’s said to employ a mild-hybrid powertrain to slash fuel consumption and consequently lower emissions. BMW has pledged to keep the V8 alive until at least 2030, so electrifying it is the only way to comply with stringent regulations.

As far as the electric range, the XM’s battery had enough energy for 80 kilometers (WLTP) or 30 miles (EPA). The M5 could have a tad better range since we expect the sedan to be slightly lighter than the SUV. We’re loosely using “lighter” here since the current M5 is already a heavy car, and its electrified replacement will add bulk. Could it weigh over 2,000 kilograms? Quite possible.