Let’s dial our imaginary time machine and go back in time when BMW North America introduced the M3 Coupe Lime Rock Park Edition. It happened in mid-2012 when the M car finished in Fire Orange was unveiled exclusively for the US. Only 200 cars were ever built that summer, and now one of them can be yours. It originally cost $70,995, but we’re sure this one will go under the hammer for over MSRP.

After 23 bids, it’s already at $61,500 and there’s still one day left until the listing expires on Cars & Bids. It has had only two owners, both from California, and was driven for a relatively low 36,500 miles. BMW sold the M3 Coupe Lime Rock Edition bundled with the Competition Package. This one has the more desirable six-speed manual gearbox and comes with a clean Carfax history report.

It’s been lightly modified by receiving an Akrapovic exhaust, but the lucky buyer will also get the OEM exhaust. Sold during the final model year of the E90 M3, the performance coupe has tinted windows, PPF at the front, custom connecting rod bearings, and connecting rod bolts. There’s even a fire extinguisher in case something goes horribly wrong. 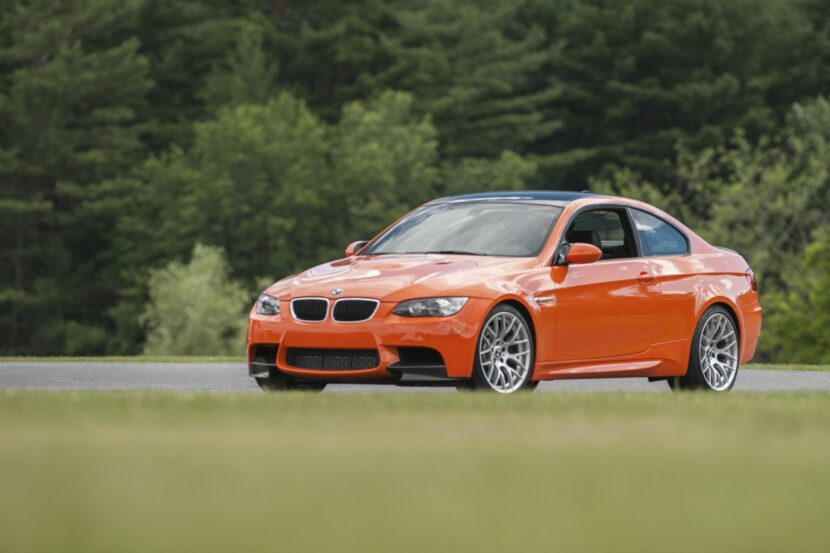 Whoever buys the M3 Coupe Lime Rock Park Edition will likely want to change the tires since they’re seven years old. Other known flaws include a bit of wear on the driver seat’s bolstering and repainted portions of the front fascia. The seller explains the car’s paint beneath the carbon fiber splitters was damaged when the PPF was installed.

This limited-run special edition sat slightly closer to the road than a regular E90 M3 and packed 414 horsepower from its naturally aspirated 4.0-liter V8. The well-known S65 engine delivered 295 lb-ft to the rear axle through the standard manual or optional seven-speed, dual-clutch automatic. BMW added a plaque on the center console to denote its exclusivity: “One of 200.”

We will be keeping our eyes on the listing since we’re fairly certain it will go for over $70,000. Whether that will be enough to meet the seller’s reserve remains to be seen.