BMW offers a vast lineup and therefore it’s always working on a facelift or a next-gen model. It’s especially true in today’s automotive industry with life cycles getting shorter and shorter. It’s happening because stiffer competition forces automakers to renew their products more often. The X7 is Bavaria’s largest SUV and has been spotted hiding its Life Cycle Impulse on the streets of Germany where the equivalent Alpina XB7 was also seen.

Let’s cut to the chase and address the elephant in the room captured in this video from CarSpyMedia. Yes, the fullsize luxury SUV in both X7 and XB7 flavors will get a split headlight setup. Seems familiar? The Concept XM had it first. Cutouts in the camouflage at the front clearly show the upper LED strip for the daytime running lights. The DRLs are mounted where the front bumper meets the hood, while the rest of the headlights sit lower, à la 8 Series E31.

Moving on, it would seem the X7 and XB7 won’t adopt the gargantuan front grille of the iX electric. That said, it’s already quite large as it is, but could be worse if the electric SUV is any indication. BMW and Alpina camouflaged their prototypes to hide mildly updated LED taillights. In case you haven’t figured out by now, the dark gray prototype belongs to the Buchloe manufacturer. 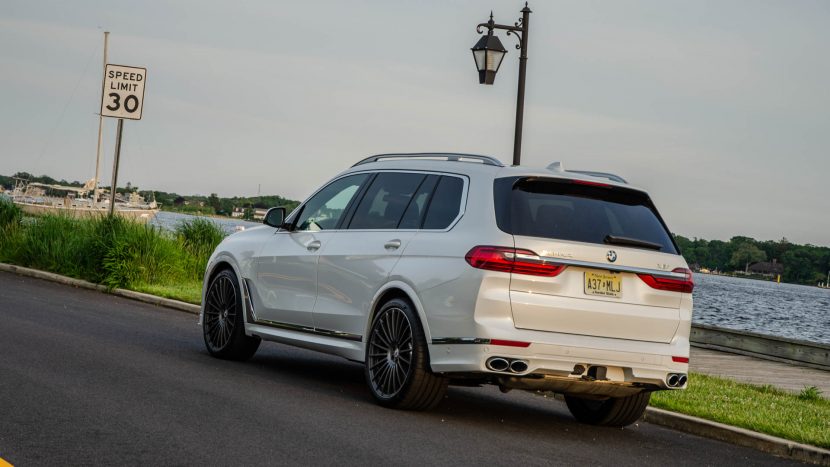 One of the BMW prototypes is quite interesting in the sense it’s flaunting a quad exhaust system. It possibly means the X7 M50i will adopt the new setup. As a refresher, the M50d is no more since the quad-turbodiesel engine with its 560 lb-ft (760 Nm) was discontinued a while back. As for the Alpina, the XB7 has the familiar four oval tips in the same vein as the current model.

What’s Inside And When Are They Coming?

The man with the camera wasn’t able to take a peek inside where the SUVs were hiding a big secret. The dynamic duo will switch to the iDrive 8 first seen on the iX and i4 before trickling down to the 2 Series Active Tourer. That will bring significant changes to the dashboard by accommodating side-by-side screens hosted in a curved glass housing.

The disguise should come off sooner rather than later as BMW and Alpina will unveil X7 and XB7 in facelifted guise for the 2023 model year. They’ll have to forgo the flagship SUV status to the XM with its 750-horsepower output from a plug-in hybrid V8. At the other end of the spectrum, the entry-level X1 will transition to the next generation and will come along with an EV option.