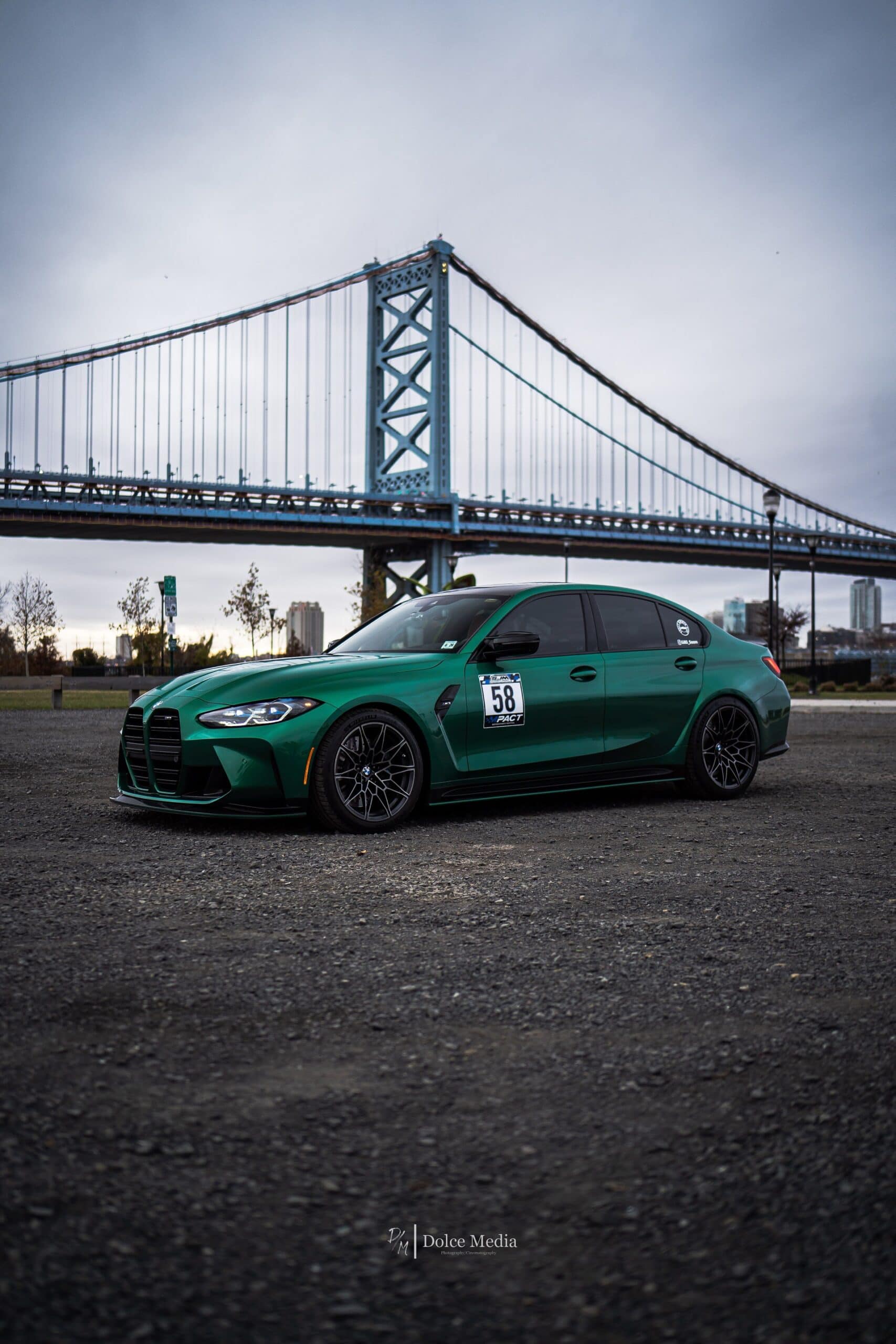 It has been six months since I picked up my Isle of Man Green 2021 BMW M3 G80 generation. And of course, I had to get the six-speed manual paired with this new and bold M3. Fast forward to today and my G80 M3 just hit 10,000 miles on the odometer. Or should I say “smiles”? First off, just a brief history on myself. I’m 32 and have been a die-hard BMW fanboy/enthusiast for the past 20+ years.

I remember my first ever Roundel magazine as a kid which had the now legendary E46 M3 on the cover. That is still my favorite M3 to date. Ironically, the June issue (same month I picked up the car) this year had an IOMG/KO G80 M3 on the cover, just like mine. It was meant to be right? This is my first BMW M car but I have driven many previous M models. I am also around them a lot since I run Philly Bimmer Club and host many meets during the car seasons.

A Plethora Of Mods

The point of this review is to focus mainly on my mods and experience daily driving this beast the past 6 months. And there are a lot of modifications done to the car, so fair warning ahead. Some of the current mods are the following:

As everyone knows, these new M3/M4s were screaming to be lowered with the amount of wheel gap it has stock. The H&R Sport Springs was technically my first mod and I did it right after break-in service following month. Initially, I was not happy with the drop. The front still had way too much gap but after a couple thousand miles, thankfully it settled. I wanted a conservative drop because I knew I would be getting the R44 lip soon and did not want to break it like I did three times on my last 340i. Philly/Jersey roads are horrendous. The Ride and handling is very good and comfort is just like stock. I will probably be switching to something a little lower once I install new wheels though because fitment is everything.

Another thing lacking in the G80 M3 is the exhaust sound level. It actually has a decent tone stock but it was too quiet. After contemplating quite a bit between dual pipes (PSI) and the single (Valvetronic), I went with the latter. The single mid-pipe gives a deeper pure inline-six tone. It absolutely transformed the sound of the car. All the aftermarket dual setups have too much rasp in my opinion. It made the exhaust about 30 percent louder with additional burbles. I also did a dyno and the mid-pipe added 10-15 whp. Pretty normal.

Next, I went with more power. Now, that’s not to say the car isn’t that powerful stock. It is but a Burger Motorsports JB4 put me at a level playing field with the M3/M4 Competition since the only difference between the Comp and Manual is the boost level on the turbos. This was a gamechanger. The power and torque the S58 delivers on ethanol is pretty mindblowing. The car doesn’t break a sweat and dares you to push it hard. I know a lot folks are now going to flash tuning but the process is too much of a hassle at the moment. The JB4 has been great and I will be sticking with it for a longer while. As always, using a tuning solution on your car might void the warranty, so don’t follow my steps if you’re uncomfortable with tuning your own car.

SSR Catless Downpipe – This was my first time going catless. I previously only used catted downpipes. Boy, did this make a difference in not just sound but performance. The car sounds and pulls like a freight train. It is intoxicating. Throttle response got better, the exhaust screams, and I gained 40+ whp/tq on the highest JB4 OTS map. The factory valve control does a tremendous job keeping things quiet when you want to.

In Efficient mode, the car is just like stock under 5,000 RPM. I use this when commuting to work. Sport+ is what I use the other half of the time and this is full on obnoxious loud with the loudest burbles. Sport is kind of in between both modes but I rarely use it. It’s all or nothing for me. This downpipe, however, is not a flex pipe and took some custom welding to fit the mid-pipe perfectly. There are some flex pipe options now that are easier to install.

Since I got the exhaust situated, I had to give the engine bay some love so in came the “whoosh” noises. I love the Burger Motorsports Intakes. My butt dyno instantly felt more throttle response and torque increase. The dynos done on these intakes also prove they do increase power/tq. The spooling and “blow-off” sound is awesome and never gets old.

To improve the styling of the BMW M3 G80, I went with the R44 Performance Carbon package. The carbon ducts, splitter, side skirts, and spoiler really enhance and complete the look of the vehicle. Especially the front-end which was calling for a splitter. I added my personal touch with the paint matching strip on the splitter and side skirts. The quality of the pre-preg carbon is top notch and just like OEM. Folks who did not like the front end actually has come around to love it now! You can never have too much carbon and there will be more to come.

This 2021 BMW M3 is nothing short of spectacular. I love driving it more and more everyday. I should probably take a little step back as I put on 10,000 in the first 6 months. It is just that good and fun. The modifications turned it from a great car to an absolute beastly machine. It’s a four door quiet, comfortable family car, grocery getter, commuter that gets decent gas mileage. But, at the push of a button and gas pedal, it turns into a loud monstrous racecar. It truly is a jack of all trades. The clutch has not slipped once even when pushing so much power/tq the past 8,000 miles or so I had the JB4.

Some people thought the manual was put in as an afterthought, but no, it was beefed up to handle more than any M car before it. It is a special feeling to be beating automatic cars on the street and track with a stick shift! Handling is superb and planted during corners and twisties. Brakes are fantastic, although squeeky and a brake dust nightmare. The car gives you all the confidence that it can handle what you throw at it (responsibly). Few other minor annoyances is the Harmon Kardon’s are a downgrade over last generation, but I listen to mainly exhaust noise anyway.

In the $80,000 – $100,000 range, there isn’t another car that can give you what the G80 M3 offers especially after some upgrades. It looks fantastic and gets compliments left and right. It sounds amazing and breaks necks. Drives like a dream. Built like a tank. It is the Ultimate Driving Machine and BMW hit it out of the park!