At the end of last month, BMW published images of the next-generation 7 Series testing in snowy Sweden. However, an important design (and functional) detail was deliberately left out as the team currently based at the BMW Group winter test center in Arjeplog camouflaged the upper layer of headlights serving as the DRLs. Only the main low/high beam clusters were left exposed, but even those seemed to be a provisional set.

A new rendering from SRK Designs attempts to digitally remove the camouflage in an attempt to predict the design evolution planned for the G70. The luxobarge will adopt a new design language previewed by the Concept XM, which will go into production later in 2022 featuring the same split headlight arrangement. That’s not to say all BMWs will inherit this appearance since the next-gen 5 Series has been spied and it seemingly had one-piece lights.

Of course, the headlights are only a part of the story because, after all, we are talking about a flagship car from a premium brand. The fullsize high-end sedan brimming with tech will feature a level 3 autonomous driving system, for which archrival Mercedes received international certification this week for the S-Class as well as the fully electric EQS that will do battle with the i7. 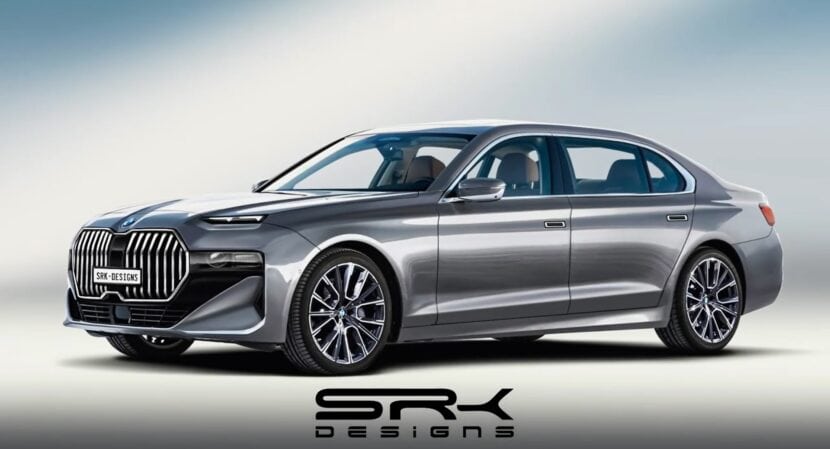 As far as engines, you can say goodbye to the M760i and its V12, but not to worry as we’ve heard there will be a new V8 (codenamed S68) as well as updated inline-six powertrains. The combustion-engined 7 Series should have somewhere in the region of 565 horsepower in its most potent configuration whereas the zero-emissions i7 is going to pack over 600 hp.

Coming with air suspension and soft-close doors standard across the range, the new BMW 7 Series will reportedly enter production in July next year and receive a mid-cycle facelift in March 2026 before bowing out in June 2029. If the timeframe is accurate and the SOP will indeed take place mid-2022, it likely means the world premiere is scheduled to take place in the coming months.