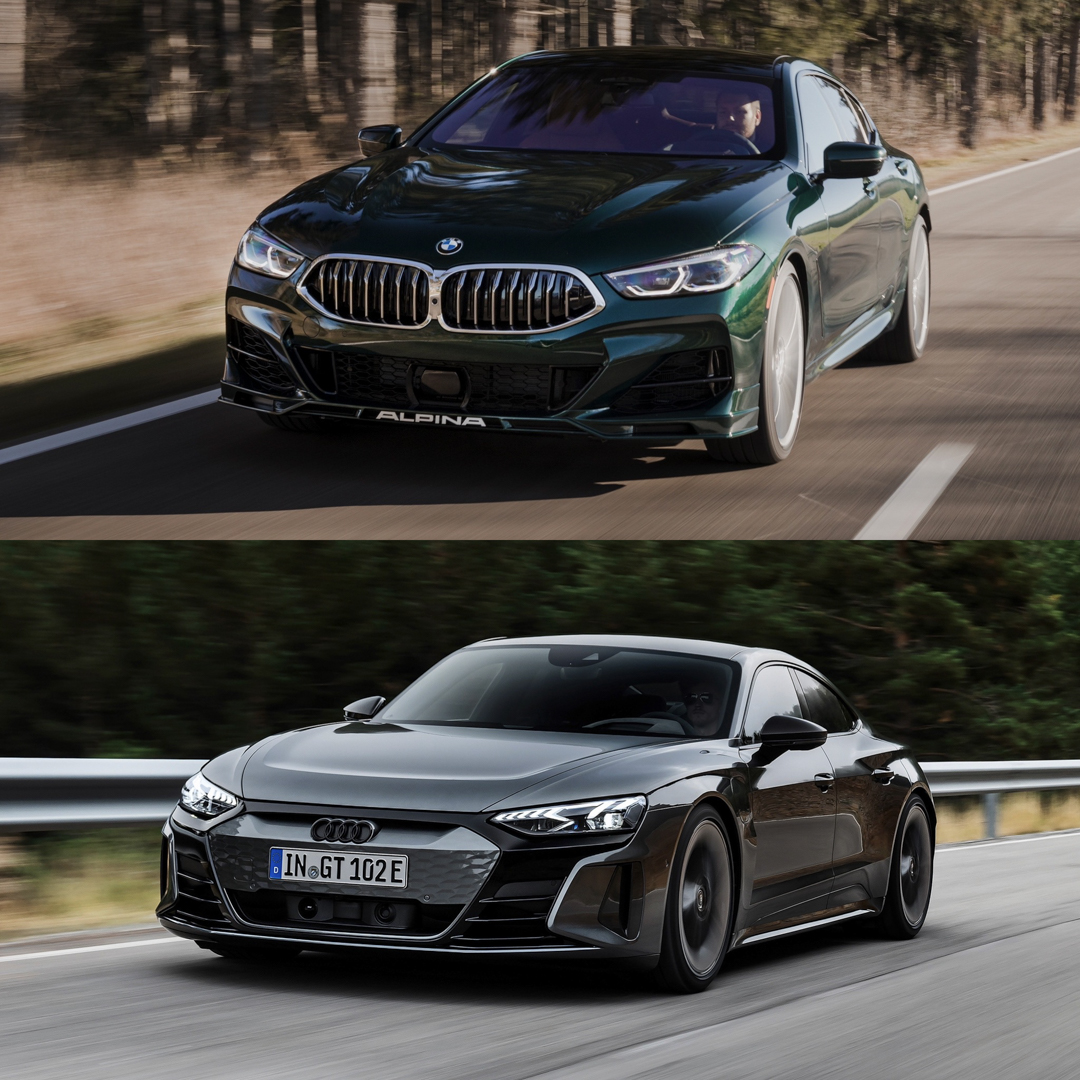 Okay, so this comparison is a bit odd and very subjective, especially since the two cars play in different segments and with different demographics, but I thought it was interesting, so let’s take a look. The ALPINA B8 Gran Coupe is a gas-powered super sedan that leans more on the side of grand touring than outright performance. Outside of the M8 Gran Coupe, Audi RS7 Sportack, and Mercedes-AMG GT 4 Door, there really aren’t many natural competitors for the B8. I was actually going to do the AMG but that’s a bit boring and I wanted to spice things up. So I thought I’d go a bit outside the box and choose the all-electric Audi RS e-tron GT.

At first, I was actually going to choose the Porsche Taycan Turbo but the Taycan is more of an electric BMW M8 competitor, in that it’s also supposed to be able to drift like a hooligan. While the Audi RS e-tron GT is essentially the same car as the Taycan underneath, just tuned to be more comfortable and more of a GT car than a proper sports car. Which is more in keeping with the B8’s philosophy. So I thought it was the more fitting of the two EV super sedans to take on the ALPINA B8. Also, the e-tron is better looking than the Taycan and it’s going to need all it can get to take on the gorgeous B8. 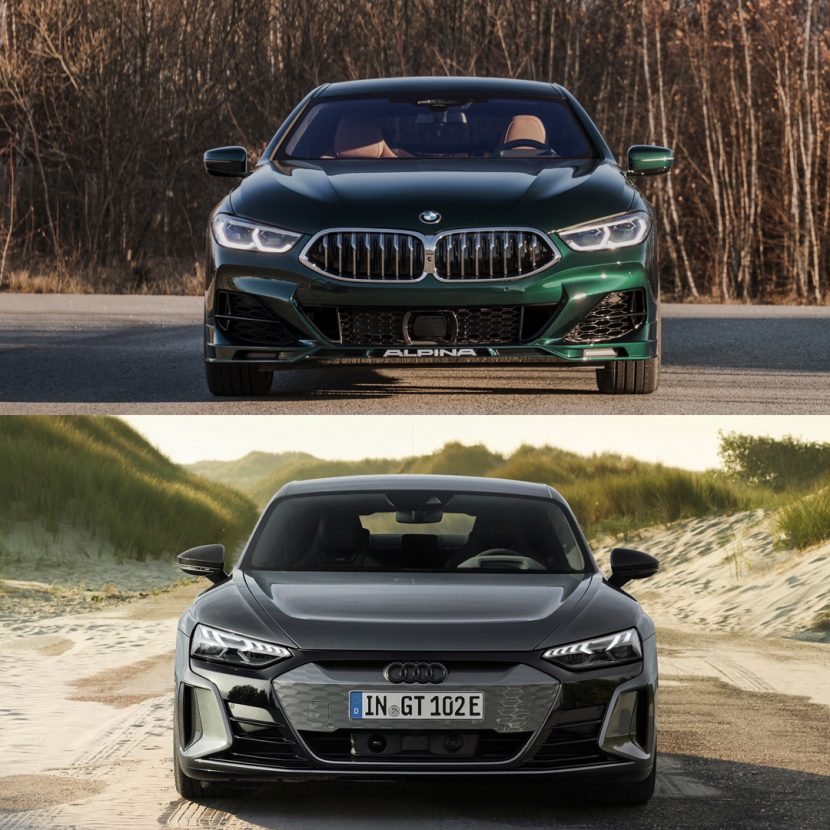 What’s interesting about these two cars is that, on the road, they’re designed to be high-performance GT cars, capable of being every bit as comfortable and smooth as they are fast and agile. However, on the outside, the ALPINA B8 Gran Coupe shows that GT-minded nature, while the Audi RS e-tron GT is extremely muscular and aggressive.

Up front, the RS e-tron GT, despite being all-electric, is very shouty and angry, with angular headlights, sharp edges everywhere, and a sort of inverse hood dome. While the ALPINA B8 is the exact opposite; it’s sophisticated, reserved, and understated. Both are great looking cars up front but, somewhat ironically, their faces are both their weakest links. I think I’ll have to give it to the ALPINA up front. 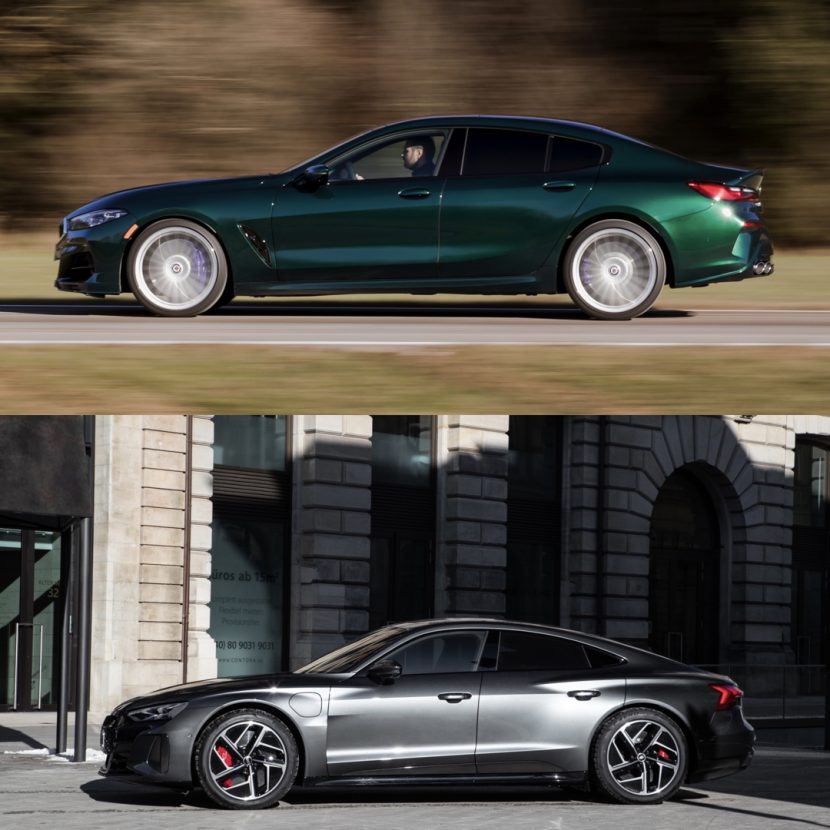 In profile, the Audi takes the win in my opinion. Not because the ALPINA B8 is bad looking; far from it, the B8 Gran Coupe is stunning from the side; but because the e-tron GT has a great side view. Admittedly, it has an inherent advantage being an electric vehicle, as there are almost no packaging restrictions to its design, so Audi designers could run wild. Still its muscular rear haunches, flared front wheel arches, low slung roofline, and perfectly proportioned silhouette are nigh impossible to beat in a four-door car. The B8 is gorgeous as well but, comparatively, it looks a bit tall on its wheels. 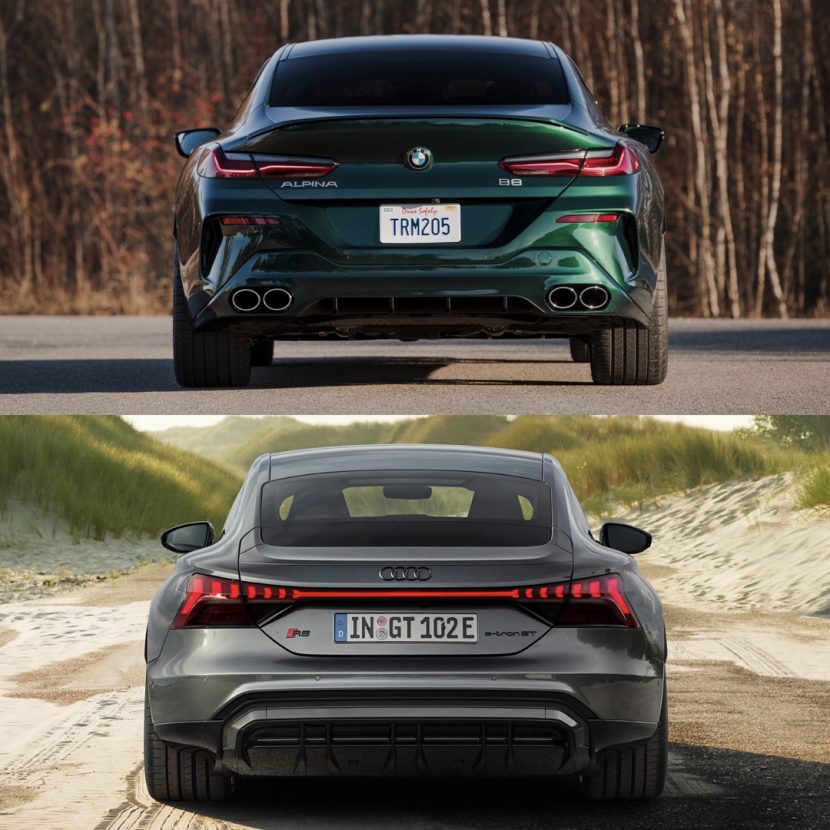 Out back, it’s a bit interesting. The Audi RS e-tron GT features a killer rear light bar but the lack of exhausts really sort of dulls the look of the back end. Maybe that’s just me being an old curmudgeon. Still, the RS e-tron’s rear haunches give it such presence, such muscularity that it’s hard to ignore. The B8 Gran Coupe has a great looking butt; with its handsome taillights, sporty rear diffuser, and its kick-ass quad exhausts that peer through the rear bumper; but it just lacks the presence and theater of the Audi RS e-tron GT.

The Audi RS e-tron GT might take the win here, despite being a very subjective comparison. In all other company, the ALPINA B8 Gran Coupe is difficult to beat, because it’s just such a beautiful car. But the RS e-tron GT shows the inherent benefits of designing an EV, as designers have so much more freedom to create exciting, impassioned designs. Maybe when the ALPINA goes all-electric, it will have some unique designs that can’t be beat. 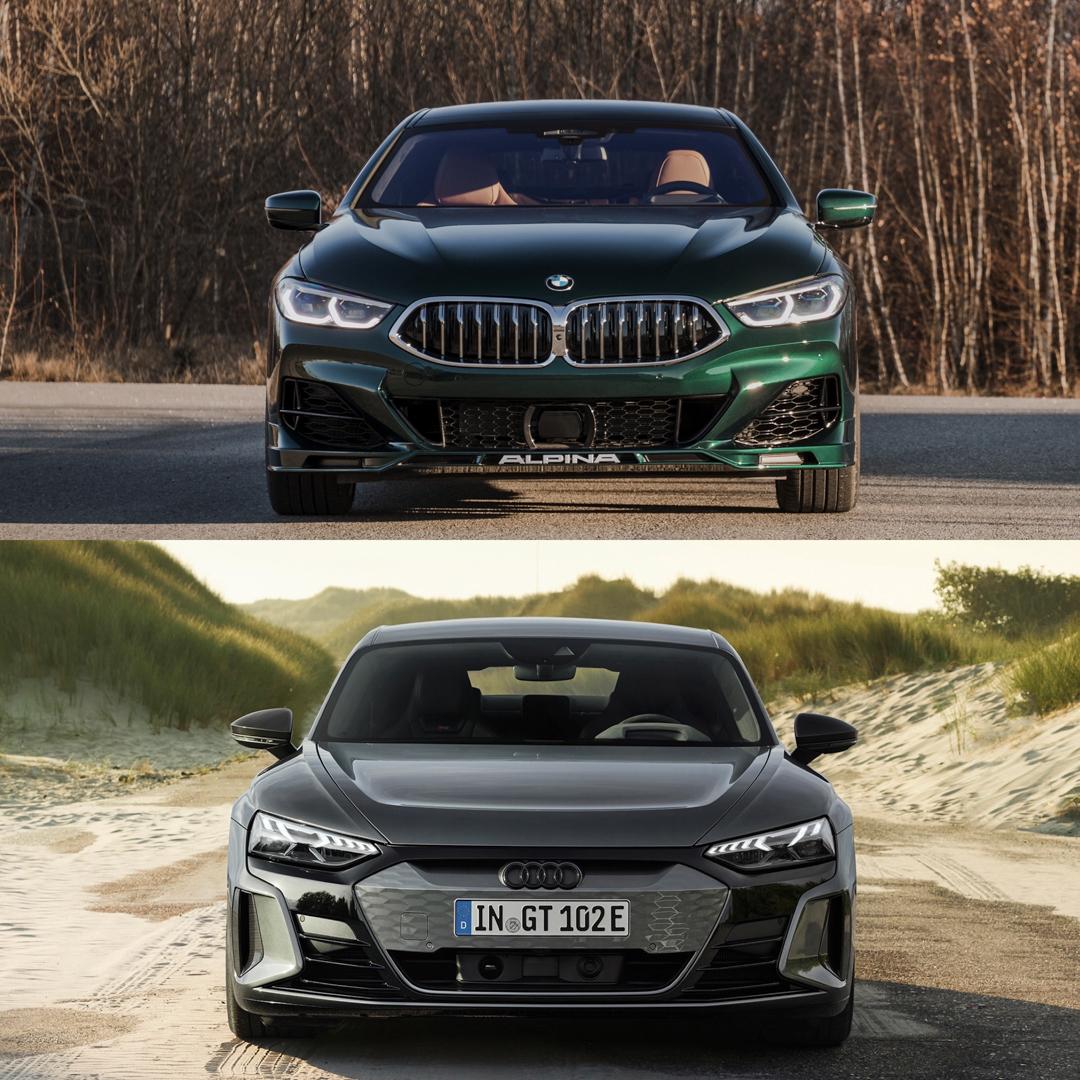 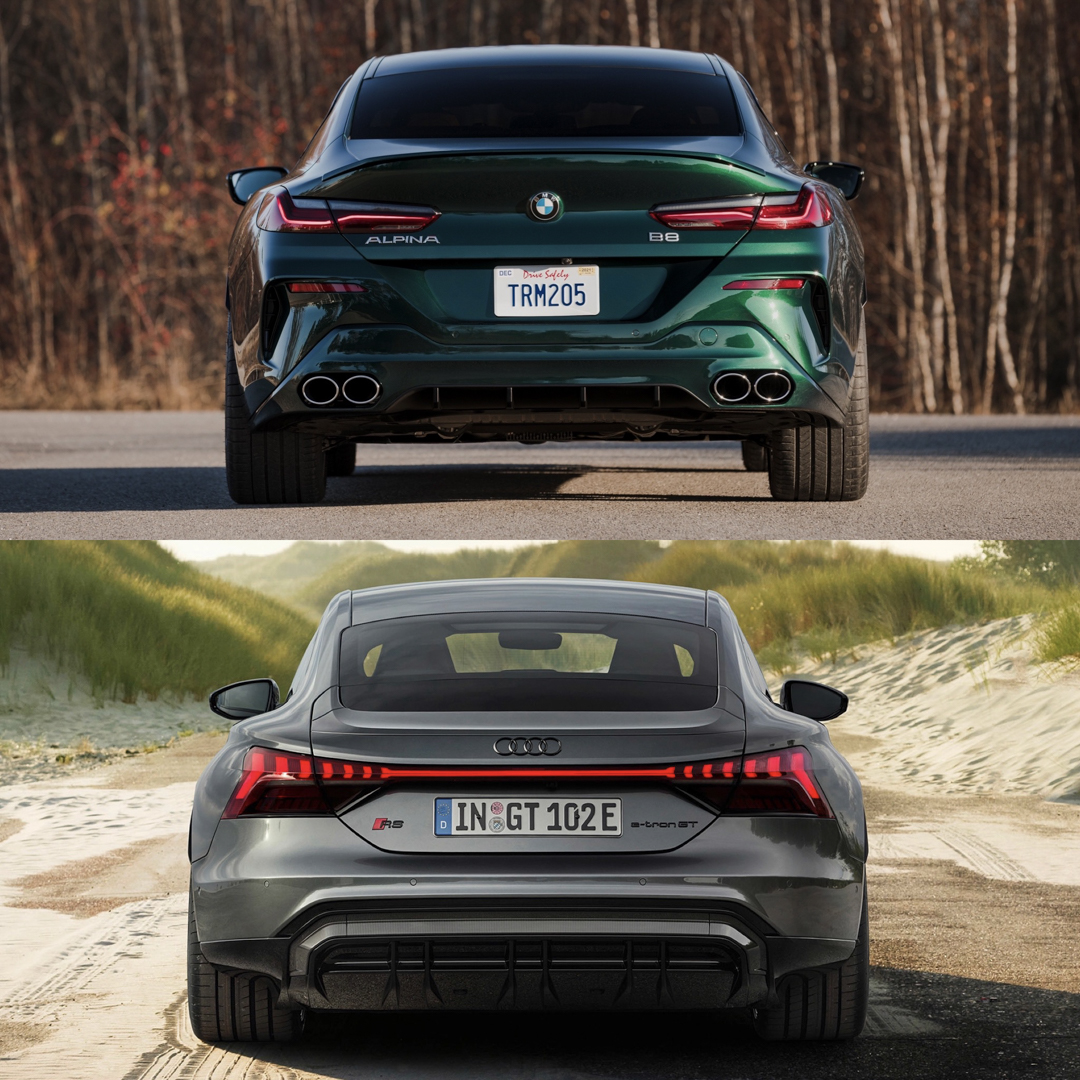 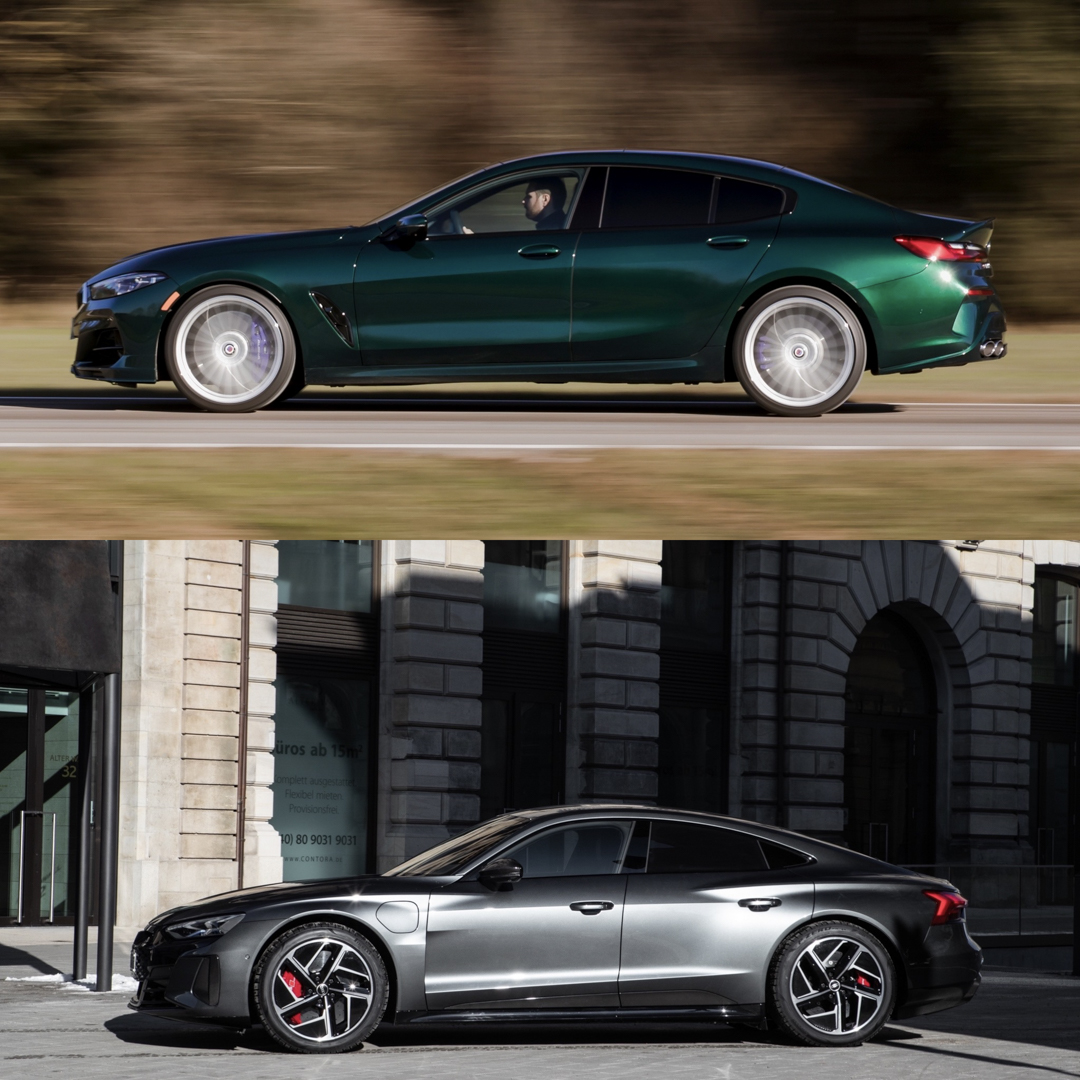