The team at BMW Group Classic decided to start a mini-series of videos showcasing the amazing cars they have in storage right now, since we can’t go over there and seem them ourselves. We started off with the BMW E30 M3, continued with a classic Mini and are now introduced into the world of bikes. In case you forgot, BMW made motorcycles before cars and has kept on making them over time, with great success.

The bike we’re talking about today though is no ordinary, road-going bike. This was the R80 G/S bike that won the Paris-Dakar rally in 1985 with Gaston Rahier. BMW bikes have a long history in that particular rally which is considered one of the most gruesome on the planet. Right now, the Dakar rally is no longer a trip between Paris and the Senegalese city but taking place in various locations around the world. Even so, the demanding character of the event never changed. 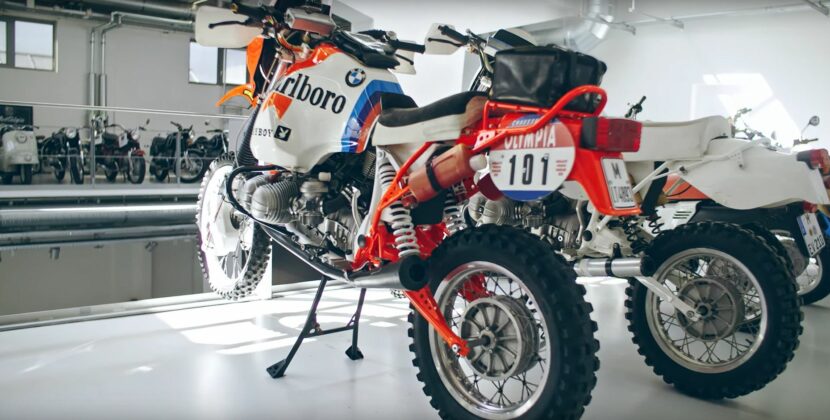 As for this particular bike, it has a couple of very interesting stories behind it. First of all, during those days BMW was involved in Formula 1 and they used a couple of tricks learned on the track to get a winning advantage in this rally too. They used a special additive for the fuel, to squeeze out a few more horsepower. The fact that Gaston was very little also helped out as it kept the weight down. Gaston was so short, as a matter of fact, he had to start the bike and get it in first gear first and then hop on it as it was moving to get going. Otherwise, he wouldn’t be able to reach the ground with his feet while riding on it.

The most interesting story about this bike though comes from the rally itself. During one of the stages, in the very beginning as Ben tells us, the bike had a massive crash. That broke the front suspension and tore it from the chassis. Since the rules say you need to finish with the bike you started with, the team had to fix it on the spot and it was welded back together. As you can imagine, a job like that done in the desert couldn’t be perfect and the wheels wouldn’t line up, leading to this being the only bike in the competition that left two tire marks instead of one.