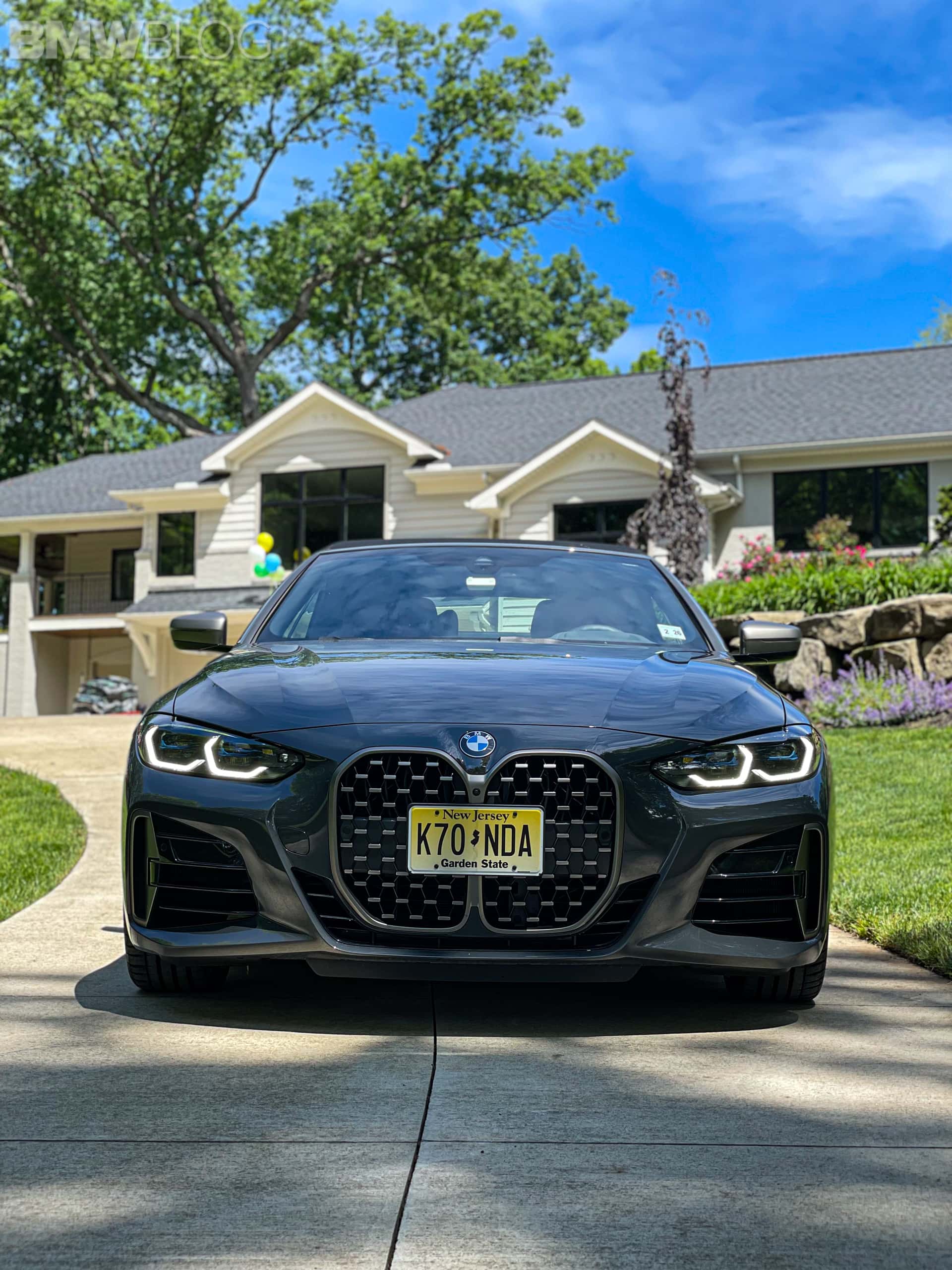 Some new photos of the next-gen 2021 BMW 4 Series have just leaked (here and here) showing off enough of the final production car to get an idea of what it’s going to look like. Right now, you’re mostly wondering what the grille looks like, as it’s been such a hot topic ever since the Concept 4 debuted. If that’s the case, you’re going to finally get your wish, as these photos show off the car’s new grille. And it’s very large.

Up front, we see the final production car wearing a sheet, with some of that sheet pulled up at the front, revealing the new massive 4 Series grille design. It’s almost exactly as large as what we saw on the BMW Concept 4, with two enormous, gaping Kidney Grilles that merge in the middle to the point of looking like one giant grille.

Rather than BMW’s traditional vertical slat grille inserts, this car has the same sort of dotted design as current M Performance models. That leads us to believe the car we’re looking at is the upcoming BMW M440i or the M440d.

We also get a good impression of the front apron design of the M Sport package, because apart from the grill, the M Performance models are known to remain very close to the aerodynamic package.

Continuing at the front, the new 4 Series seems to get different headlights than its 3 Series sibling. They’re a bit sleeker and lack the little upward notch at the bottom that the 3er has. Underneath the monstrous grille is an M Sport-style front bumper that looks quite good and very sporty. In fact, if you can get over the massive grille, the front end actually looks pretty good. Plus, the grille isn’t nearly as bad as we thought it would be. The grille insert might make the difference, honestly, as we feel that if this enormous grille had vertical slats it would look quite horrific.

Out back, we see the new taillight design of the 4 Series, which is a bit more sculpted than that of the 3 Series. Though, I’m not quite so sure I like them as much as the 3er’s. They still look nice enough, though, and should give the car a sporty looking rump.

The official unveil of the 2021 BMW 4 Series Coupe is scheduled for late this Summer, but the technically and optically closely related electric 4 Series BMW i4 Concept will be on display at the Geneva Motor Show in early March. Even though the i4 will carry an independent interpretation of the double grille, it will provide some more clear indications of the design of the series.

The conventionally powered BMW M440i xDrive, on the other hand, will use the same drive as the M340i : 374 hp, all-wheel drive and eight-speed automatic are set. The optically indistinguishable BMW M440d will use the 340 hp in-line six-cylinder diesel of the M340d G20/G21 , and the 48-volt electrical system will definitely be on board here as well.

For now, this is all we have on the new BMW 4 Series. Stay tuned and we’ll keep you updated with more.