A few days ago, Tesla make huge waves in the automotive world, with ripples still being felt throughout the internet days later. Now, we won’t talk about the actual Cybertruck itself, because its unveiling has been a bit of a mess, regardless of your feelings on the brand. Instead, we want to look at whether or not BMW should try and jump into that segment and make an electric pickup truck?

I want to preface this by saying we, in no way, think BMW will ever make a pickup of any kind, electric or otherwise. It’s just not in the cards for BMW. However, it’s not a terrible idea, actually.

BMW needs to start making more electric vehicles. Yes, the Bavarians say there are more EVs on the way but they’ve been saying that for years and we still only have the i3, while Audi has two new EVs in two years, Porsche has one and there’s even an electric Mustang crossover. Things are getting weird. So BMW needs to jump in on the weird and the best way to do that is to offer a big, high-profit vehicle. Big trucks and SUVs are the best way to create high profit margins out of electric cars. So should BMW jump into the EV pickup mix? 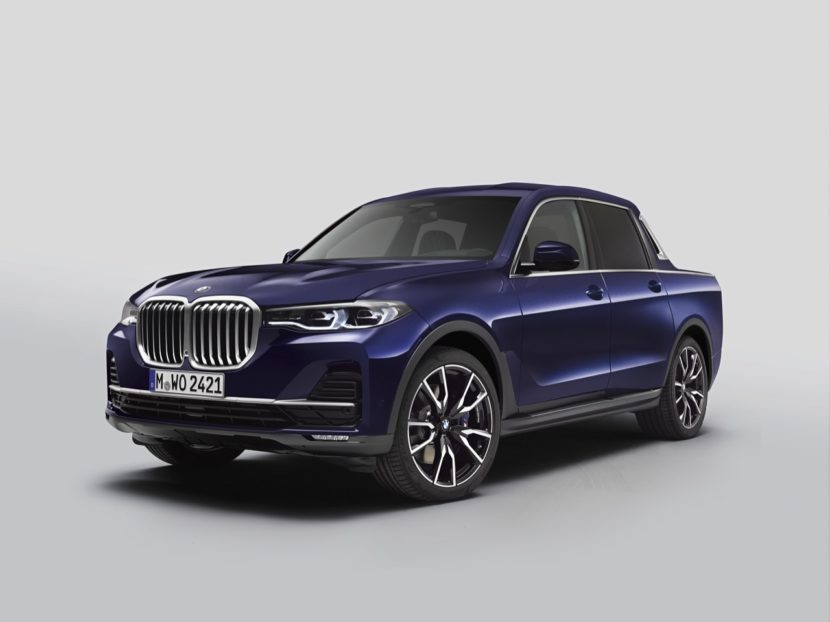 Maybe, actually. The Bavarians have the means to do it, too. Take an X7 chassis and build a giant electric pickup, similar to what Mercedes-Benz did with the G-Wagen a few decades ago. Because it’d be huge, BMW could fit a big wad of batteries in its belly, giving it a ton of power and range. It could have two or three electric motors, with the triple-motor car using two at the rear axle, and gobs of power.

Give it a low, sporty suspension and make extremely capable. We’ve already seen the X6 M and X5 M pummel race tracks into submission, so we know BMW has the capability to make big, heavy vehicles handle well. It wouldn’t be the purist of driving experiences but it would be fun in a ‘Dancing Elephant’ sort of way.

Of course, such a vehicle would be the antithesis of the BMW brand, as it’s based its reputation on driving dynamics. However, BMW also needs more EVs and if this is the sort of EV that customers want, wouldn’t it make sense to make one?

Obviously, this is all a bit tongue-in-cheek, just-for-fun speculation. In reality, it makes no logical sense for BMW to ever make such a thing. It is fun to speculate what it’d be like though, isn’t it? Imagine a high-performance, electric pickup based on a BMW X7 chassis/body? It’s so blasphemous it’s hilarious.