When the Tesla Model 3 Performance was first revealed, Elon Musk made headlines by claiming it would be better in every single way than the BMW M3. He specifically targeted the M3 because it’s the most famous car in the segment. While there have been a lot of videos showing how fast the Tesla is on track, there haven’t been a lot of direct comparison videos. Until now, at least, as Top Gear recently took the Model 3 Performance and the BMW M3 to Thunderhill Raceway in California for a proper test.

In this test, the aforementioned Tesla takes on a standard M3. It takes on the standard M3 because that keeps the pricing similar between both cars. However, the regular Bimmer doesn’t have the firepower to match Silicon Valley’s toughest competition.

Under the hoot of the BMW M3 is a 3.0 liter twin-turbocharged I6 that makes 425 hp and 406 lb-ft of torque. That engine is paired with a seven-speed dual-clutch gearbox and it powers only its rear wheels. While the Tesla uses two electric motors to make 444 hp and 471 lb-ft of torque. All of which is sent to all four wheels, as each axle gets its own electric motor. So the Tesla is more powerful, packs a lot more torque and is all-wheel drive. No wonder its 0-60 mph time is 3.5 seconds, compared to the M3’s 4.1.

Though, the Tesla does weigh quite a bit more, tipping the scale at 4,078 lbs, while the M3 weighs in at 3,439. That’s a huge weight disparity, so on track the M3 should have a bit of an advantage.

In this video, we get to see four tests: a standing quarter-mile drag race, a 60-0 mph braking test, a standing lap of the track and a drift-off. We won’t spoil it for you, as you should watch the video yourself, but it’s no secret that the M3 struggles quite a bit. It’s a much older car, it’s less powerful and it only has two driven wheels, rather than four. So it’s out-gunned from the beginning. 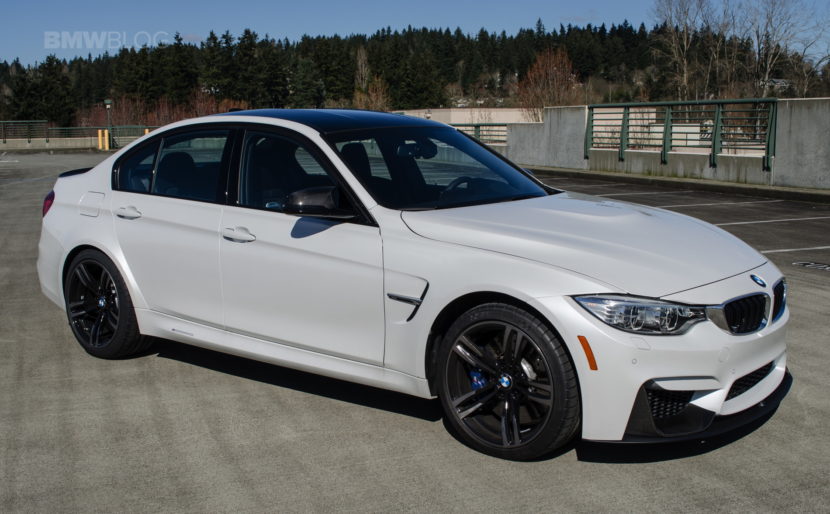 It will be very interesting to see how the new BMW M3 handles the Tesla Model 3 Performance when it debuts, as it will be much better equipped. The new car will get around 475 hp as-standard with a 500-plus hp Competition model, and it will also be available with all-wheel drive. So we can’t wait to see that test as well. BMW likely can’t either, as it can’t be happy about the way its car performed here.