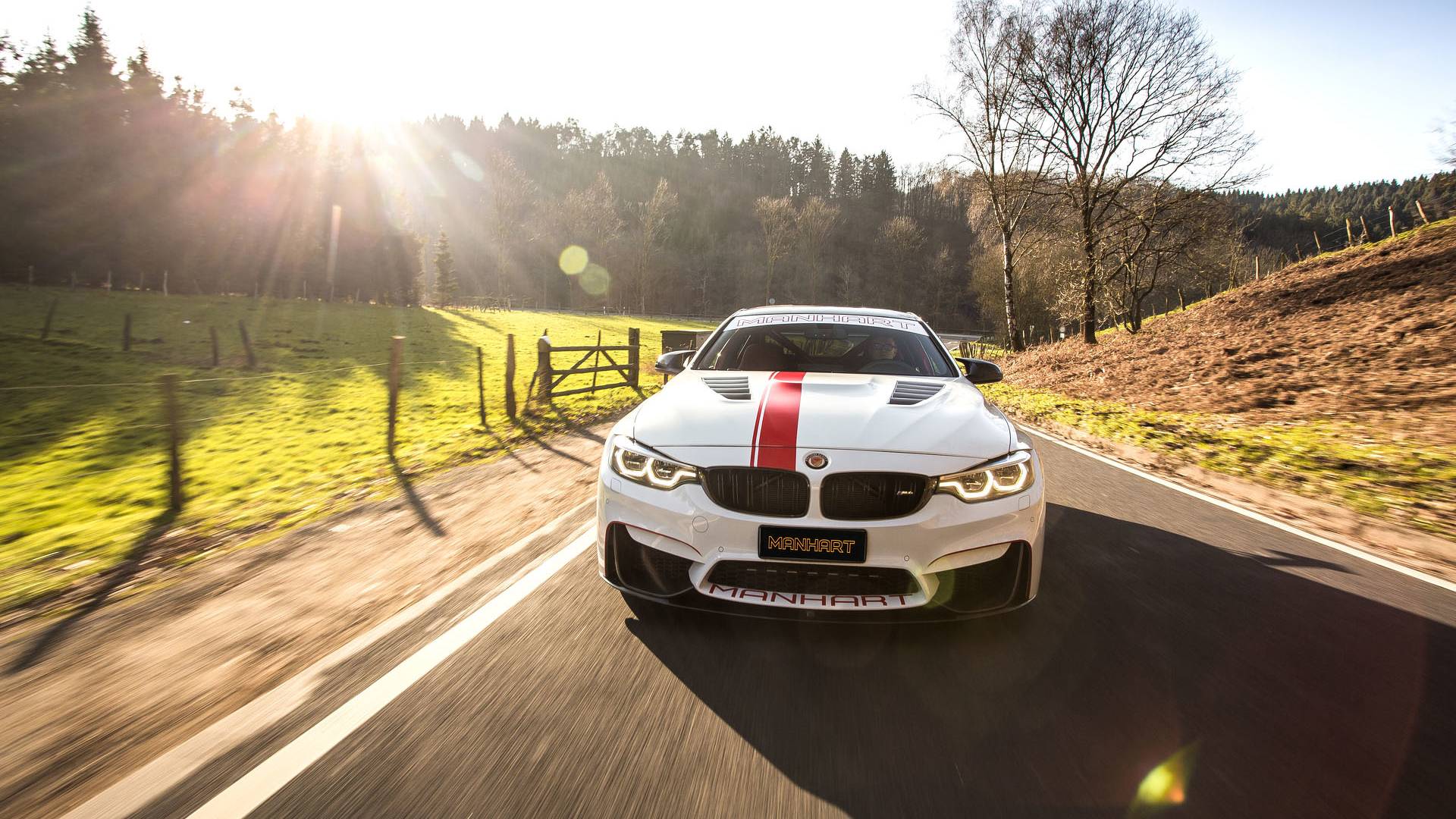 MANHART Performance have already revealed their MH4 550, a 550HP conversion based on the BMW M4 F82, a couple of years ago. This time the BMW tuner from Germany has taken the MH4 550 one step further and made it more hardcore and more track focused.

Under the bonnet the new MH4 is quite similar to the old one. The 3.0 Liter S55 Biturbo heart of the BMW M4 gained some additional 119 HP this time due to a software remapping. To guarantee that the MH4 550 gets as much air as possible into its engine MANHART has fitted the MH4 with a carbon air intake system by Eventuri. 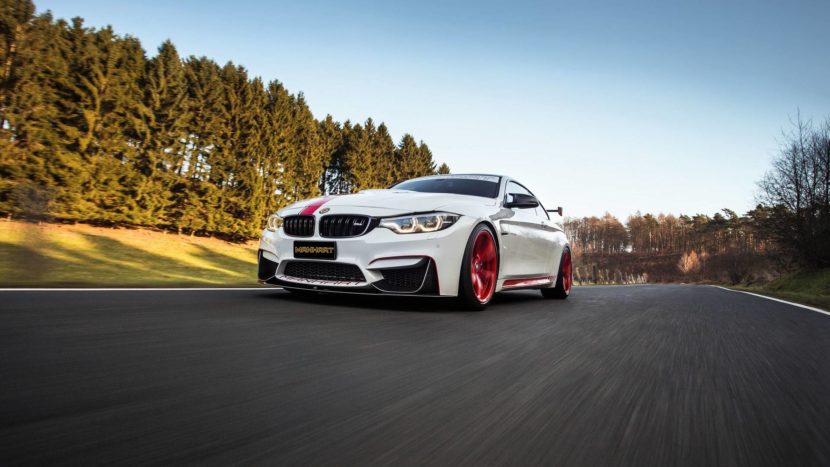 The MH4 550 now leads its exhaust gases through a catless downpipe which was built for the export market which not only increase the sound volume by a big margin but also reduce the dynamic pressure in the exhaust system. All these changes under the bonnet let the MH4 550 generate 550 HP and pretty impressive 820 Nm of torque. 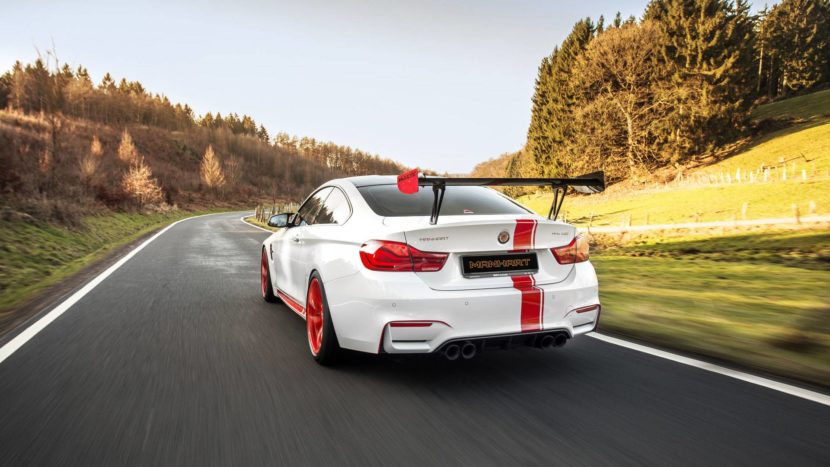 A newly fitted KW variant 3 coilover suspension lets it sit very low on the ground while the Manhart muffler is said to deliver all the snarl and backfire pops of a proper race car.

The all white body color is adorned by the already known MANHART design. Only this time the familiar stripes are bright red instead of gold. The M Performance wheels are powder-coated in just the same red. Both front spoiler and rear diffusor are gloss carbon and come from the M Performance option series as well as the new carbon mirror caps. MANHART ceramic coated exhaust tips fit right into the M Performance diffusor. 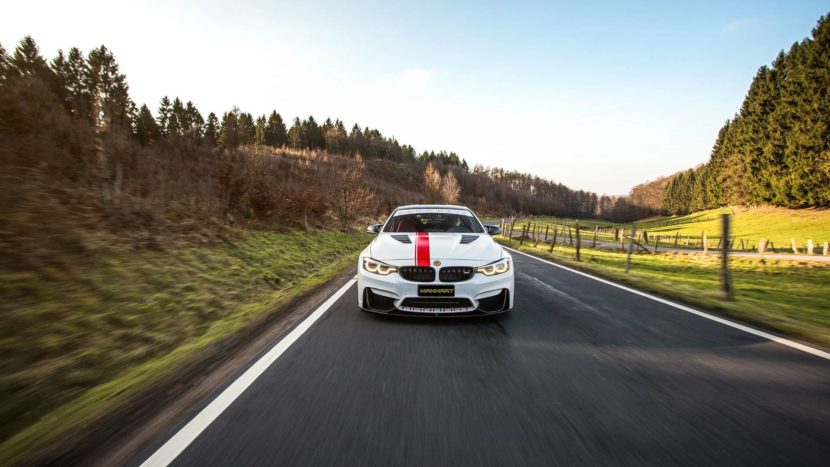 On the front the standard hood was replaced by one of MANHART‘s own full carbon hoods. While the hood is painted in white, as is the car, the carbon GTR air vents remain fully exposed. The MANHART hood itself is a real eye catcher on its own but why stop when there is more room for customization. In the back, there is a massive carbon rear spoiler which was also fitted on the MH2 630 Track Edition. 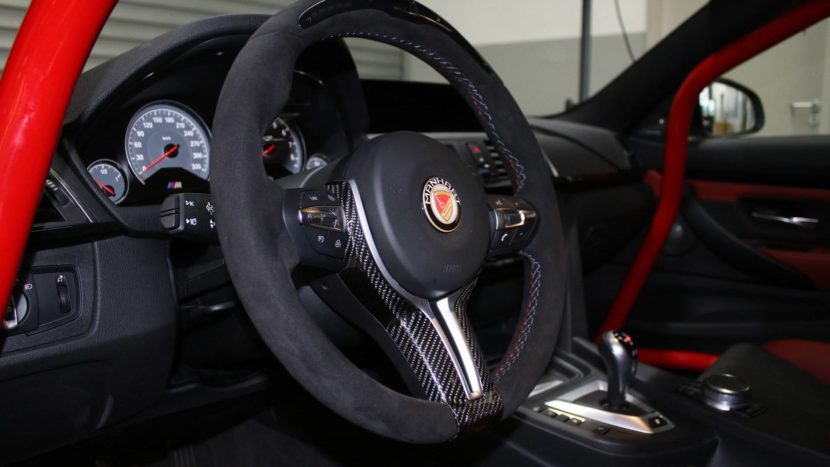 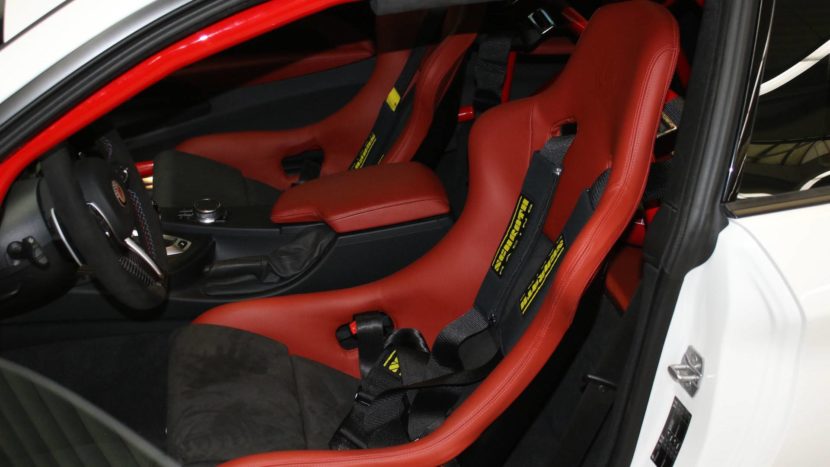 The interior is no let down either. An equally red roll cage sits where the rear seats once were. Black alcantara partly covers the red metal. The standard seats were replaced by Recaro bucket seats all wrapped in red leather including an imprinted MANHART logo on the headrest. A new M Performance alcantara steering wheel with shift indicators and carbon covers sits now right in the drivers point of view.

The obligatory Awron display which we see in almost all MANHART cars by now provides all necessary info about the car such as current utilization of horsepowers, oil pressure, boost pressure and so on.