This weekend fans of the MotoGP Championship saw the first race of this season, with BMW M once again offering a fleet of cars for various purposes to be used during races. The big star was, without a doubt, the BMW M5 MotoGP Safety Car which showed up fitted with all the bells and whistles in Doha. The city was taken over and the video BMW posted online just the other day, shows two Safety Cars cruising on the streets of the Middle Eastern city.

The new course car is based on the street version of the BMW M5, which was showcased to the global public for the first time in August 2017. The BMW M5’s technical features ensure perfect handling, even at the limits of driving dynamics. These features include the newly-developed M-specific all-wheel drive M xDrive as well as the reworked 4.4-liter V8 engine with 600 HP and 750 Nm of torque. Painstaking manual work at the BMW M Manufaktur in Garching converted the high-performance base car into the BMW M5 MotoGP Safety Car, preparing it to appear as the course car in MotoGP. 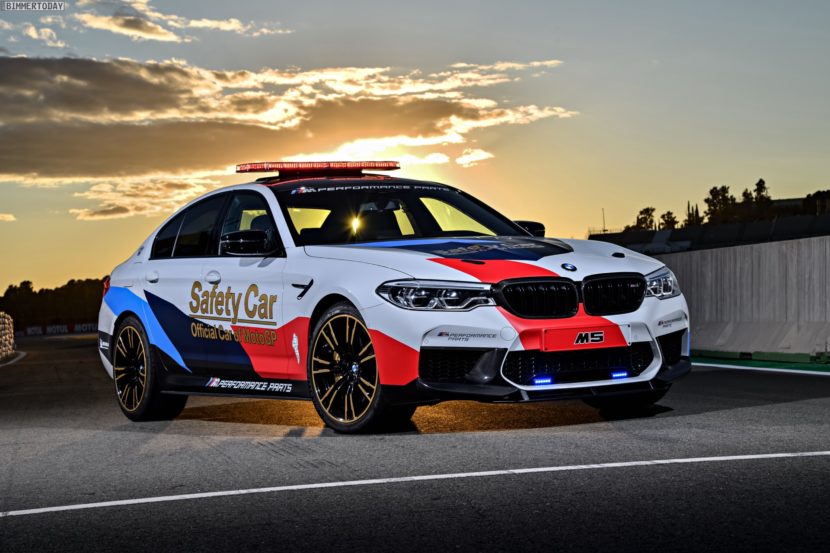 This seasons celebrates the 20th anniversary of the collaboration between BMW and the MotoGP series. BMW and BMW M GmbH have been involved as partners of MotoGP organiser Dorna Sports since 1999. In the 2018 season, the fleet of official MotoGP vehicles includes a total of seven different BMW M high-performance cars. Alongside the new BMW M5 MotoGP Safety Car the BMW M3 Safety Car will also be in action.

BMW M GmbH will provide the Safety Officer and the Race Director with a BMW M4 Coupé Safety Car with water injection and a BMW M2 Safety Car. In addition, the BMW X5 M Medical Car will take to the track this season and a BMW M6 Gran Coupé Safety Car also stands ready to be in action. Two BMW S 1000 RR, which BMW Motorrad provides as safety bikes, complete the 2018 safety car fleet.