BMW’s needed a large, true seven-seat SUV for some time now. The Mercedes-Benz GLS-Class (formerly known as the GL-Class) has been a massive success since it inception and we all know how well the Range Rover does. So something larger than the X5 was always going to be necessary for the Bavarians. Thankfully for them, the new BMW X7 is on its way and it’s looking like it will be fully capable to take on the established players. The only question that remains is whether or not customers will be interested in the new kid on the block or want the already popular one.

This upcoming BMW X7 has just been caught doing some winter testing ahead of its upcoming release (We don’t own the photos, they can be seen here). Seen here in the snow, the X7 is big. very big. BMW also seems to have taken a page out of Mercedes’ book, as this X7 has a similar roofline to the GLS-Class. Though, there’s a reason for that; it’s to allow for better rear passenger head space as well as more cargo room. So there’s method to the madness and not just pure copy-catting. 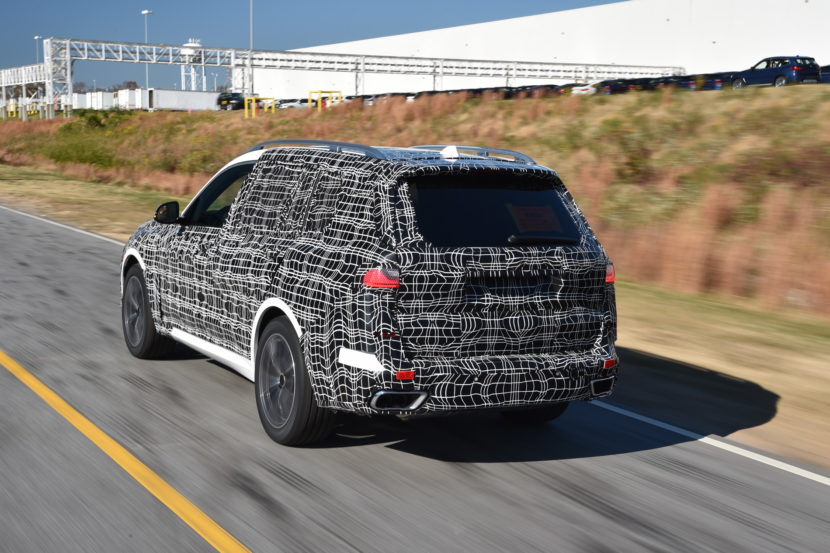 It also seems to be very similar to the upcoming BMW X5 replacement, which has very similar design cues. At least from the spy photos of both that we’ve seen. So the Hofmeister Kink is present but it’s a bit more rounded off than on previous cars and it’s not as prominent. It also seems to have smooth surfaces, something that the new X3 and upcoming X5 have, rather than the heavy creases on most modern BMWs.

The big news about the X7, though, is its face. That massive mug sports the largest Kidney Grilles we’ve ever seen. You could throw a baseball through the vertical slats in those grilles, it’s absurd. But it’s good they’re that big, as now the X7 can run over the commoners and suck them right into the grilles, without worrying about damaging the front end.

This new BMW X7 will be built on BMW’s CLAR (Cluster Architecture) platform, the same one that underpins the X3, 5 Series and 7 Series, and it will be manufactured at BMW’s Spartanburg plant in South Carolina.