Video: Check Out the Evolution of the BMW M5 Over the Years

Home » Video: Check Out the Evolution of the BMW M5 Over the Years

The BMW M5 basically invented the niche it’s currently playing in. Back in the 1980s, a car like the original M5 was something to behold. The original was a true M in every sense of the word: it was hand built, it had an engine derived from the iconic M1 and it was light on its feet. Of course, that changed over the years – more comfort, more power and more of everything. The video below shows us exactly how it shaped up over the years. 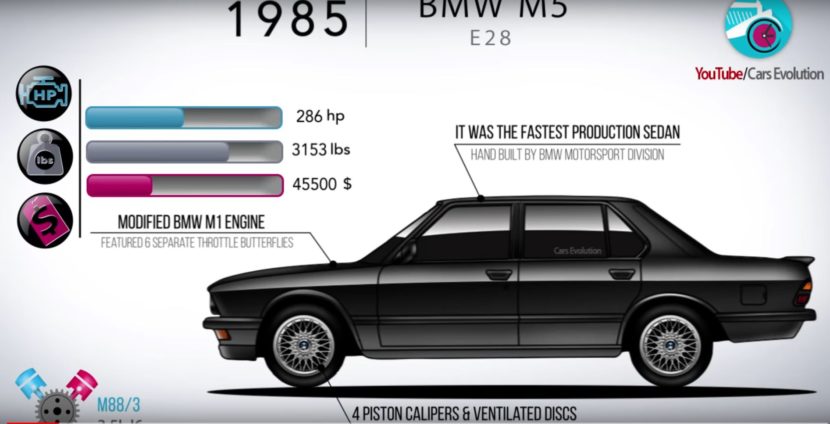 From the iconic E28, things started moving at a rapid pace. The car had such an appeal that BMW basically couldn’t build them fast enough but you need to remember those were the days when the M5 was hand built and production times were nowhere near what we’re used to today. With 286 HP, the original M5 used to hold the title of the world’s fastest sedan.  Then came the E34 which was a natural evolution of the E28. It used a 3.5-liter straight six engine as well but this one had 315 HP. It was also heavier but it did come in a special edition in 1992, one that had 340 HP and was called the 20 Jahre Edition. The E34 was also one of the few models that also came in Touring guise.

In 1998 a legend was born, in the shape of the E39 M5. It was no longer hand-built but by that time, the processes were improved so much that the build quality of the E39 is still highly regarded and well known. Under its belt hid a 4.9-liter V8 making 400 HP and it marked a couple of premieres for the M5 badge. It was the first V8-powered M5, the first one to use a recirculating ball steering system and the first M5 to feature a ‘Sport’ button.

In 2005 the E39 was replaced with a model that used Formula 1 tech for its 5-liter V10 engine. It remains to this date the only V10-powered M5 ever made and, to top it all off, it also came in Touring guise. The E60 was quite the bruiser and even to this day holds a special place in everyone’s hearts. The whole story and the sound every single model makes to this day including the new F90 M5 and it’s perfect to get you up to speed with the model’s history.