BMW made a bold decision when they said a convertible BMW M2 won’t ever be built. While some people complained about the decision initially, others understood why such a move was made and how a drop top version of the M2 wouldn’t have the same balance as the Coupe version. To this day I think it was the right call but as it turns out, some people were so upset that they decided to try and make their own Convertible M2.

The car we’re looking at today is claimed to be the world’s only BMW M2 Convertible and initially I was intrigued. My thoughts were that a tuner decided to cut the roof off an M2 and somehow manage to install a folding one on top, to make sure the suspension setup and rear diff are still in the same shape as BMW intended them to be, working as they should. However, upon closer inspection I found out this isn’t an M2 at all. 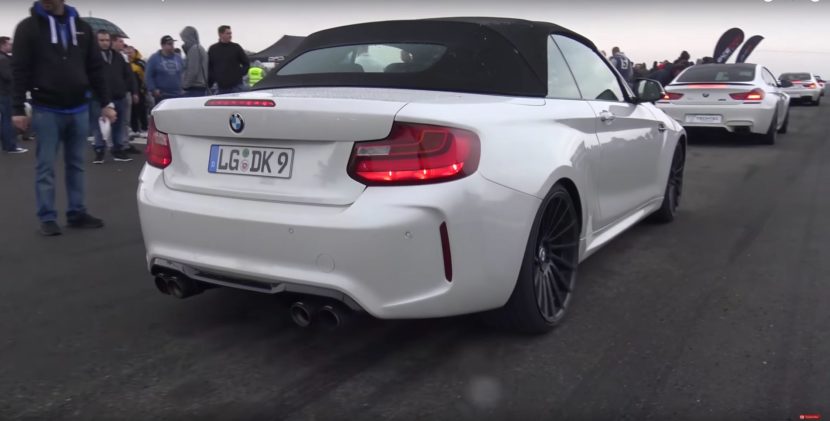 Instead, the guys from Kotte Performance tried to turn a BMW M235i Convertible into an M2. In the process they removed the front and rear bumpers, added M2 ones, as well as gills on the front fenders, all in a daring attempt to make this M Performance vehicle look as closely as possible as the real deal. They even added a quad-exhaust setup at the back. What they got instead however, is quite a potent car.

According to the uploader, the one we’re checking out here puts out 550 HP and 630 Nm (464 lb-ft) of torque out of the 3-liter straight six N55 engine under the hood. That was apparently achieved thanks to new turbos, a Wagner intercooler and a Deafpool exhaust system. If those numbers are true, this is probably one of the fastest M235i models we’ve ever seen but it still remains an M235i and not an M2 as they claim.