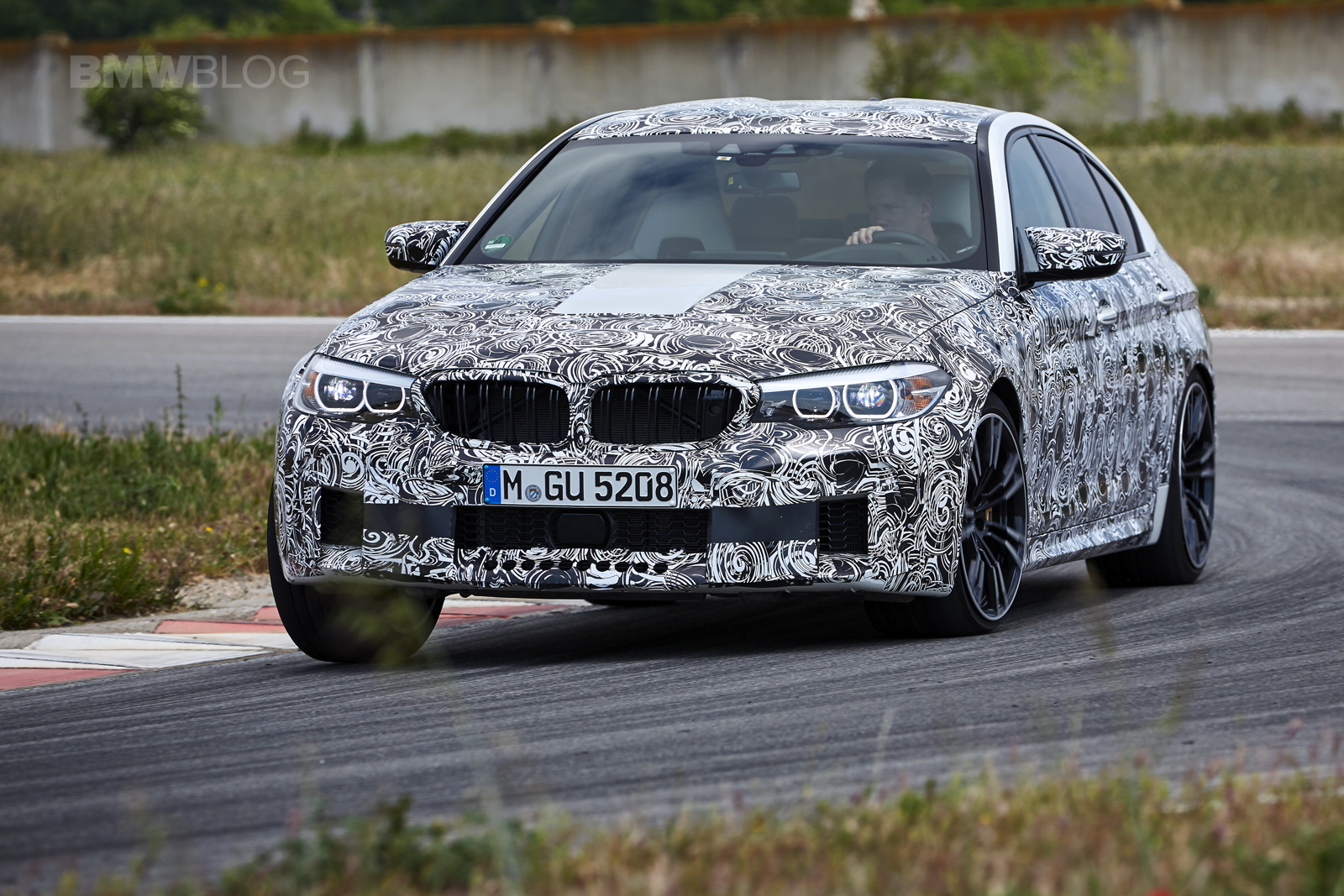 After absorbing almost every bit of information about the new BMW M5, we feel like we know almost everything we need to. We know, generally, how much power it has, about how fast it is and that it will, indeed, be all-wheel drive but have the ability to power only its rear wheels at the push of a button. It’s all very exciting stuff and it’s sort of left its baby brother behind. The BMW M550i xDrive was the big deal before we learned of the M5. When it was first announced, the M550i xDrive was the fastest 5 Series car in history. Because of that, Motor Trend poses the question of which car would be the better buy. Do you go with the cheaper and still crazy fast BMW M550i xDrive or spend the extra $30k on the all-out psychopath BMW M5?

They break it down into categories and compare the cars to each other in each. The first category is about their engines. Under the hood of the new BMW M5 lies a newly revised version of BMW’s S63 4.4 liter twin-turbocharged V8. With that, the M5 develops over 600 hp (likely around 605-ish but we don’t have exact numbers) and can get from 0-60 mph in under 3.5 seconds (we’ve heard 3.3). As for the M550i xDrive, it uses a new version of the brand’s famous N63 engine, that shares much of its components with the M5’s S63. The younger brother makes 456 hp and can get from 0-60 mph in 3.9 seconds.

So little brother isn’t much slower than big brother, despite having a significant power disadvantage. When you consider that the M5 will cost almost a 2 Series on top of the M550i xDrive, you might wonder if the bigger, more expensive M5 is worth it. According to MT, it’s not. The M550i’s engine is every bit as powerful as anyone could ever ask for and sounds just as good as the M5’s. So if it’s just power you’re after, save the bucks and get the M550i.

They also compare the two cars’ transmissions. However, this one is a wash as they’re both ZF eight-speed automatics. The M5’s ZF8 has a few changes to it to make it sportier. The torque converter locks up earlier and stays that way, while it also gets a shorter axle ratio of 3.15:1, rather than the M550i’s 2.81:1. So the M5 will feel a bit sportier, launch a bit more aggressively and will shift quicker. But the difference in transmissions won’t be enough to make a customer buy the M5 over the M550i. So it’s a wash, here. 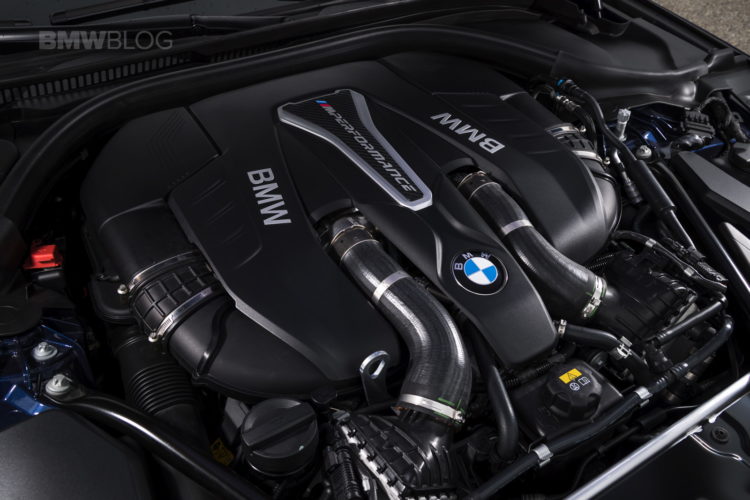 While both cars have xDrive all-wheel drive, they differ drastically. The BMW M550i xDrive is all-wheel drive, all the time. It can send 100 percent of the power to the rear under some circumstances but the front wheels are always capable of being engages. Whereas the BMW M5 can completely disengage the front axle, so as to make it completely all-wheel drive. The M5’s transfer case is also reinforced, as are the front and rear propshafts. Also, the systems that give the M5 so many drive modes (4WD, 4WD Sport and 2WD), were developed after the M550i, so it’s not something the younger brother can have. Here, the M5 poses a significant advantage over the M550i and if you want the raciest 5 Series, spend the extra money on the M5.

The BMW M5 is also a bit sharper to drive. Its suspension is upgraded and is better at being comfortable than the M550i’s is at being sporty. So the M5 has a better overall breadth of ability. Its steering is also sharper and quicker, resulting in more feel and faster turn-in. The M5 also gets revised suspension kinematics, making it the better handling car and the more enjoyable one to drive quick. So if you’re looking for something that can take to the track as well as it can to the road, the BMW M5 is your car. 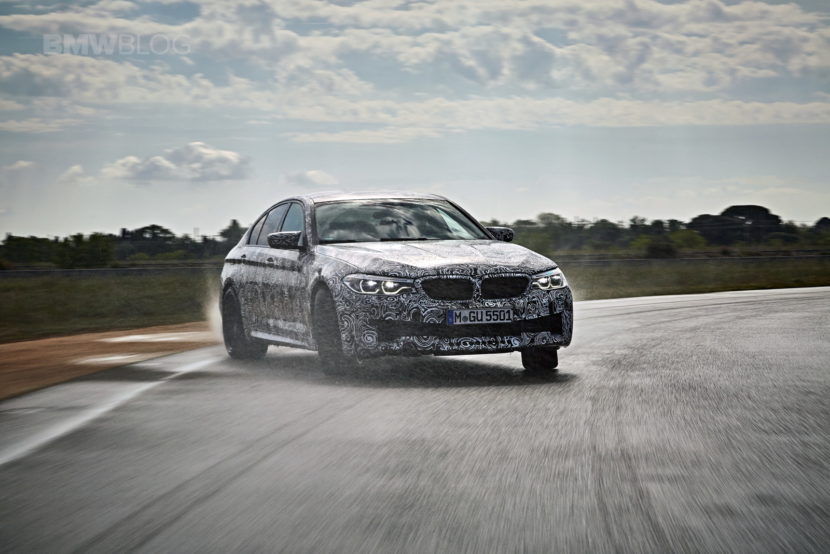 In terms of looks, it’s hard to judge the two cars, as we haven’t seen the M5 without camouflage yet. It’s obviously going to be more aggressive, flashier and more exciting than the M550i. Though, the BMW M550i is no ugly car and looks very good and very sporty. We don’t think the M5 will look so much better that it’s worth the extra premium but it will certainly be sportier looking.

Overall, the BMW M550i xDrive is a fantastic bargain when compared to the M5. It’s almost as fast, handles almost as well, sounds just as good and costs significantly less. If you’re looking for that last 15-20 percent of performance, than the BMW M5 is worth spending the extra money for because it has a chance to be the baddest performance sedan on the planet. However, if you can live with not having the absolute last word in super sedan performance, the BMW M550i xDrive is a great deal.