The BMW i division is currently providing support vehicles for what may very well become the Formula 1 of the 21st century. Formula E is gaining more and more traction as time goes by, even though it may seem impossible at first. BMW announced that it will be entering the competition, marking a sort of comeback to the forefront of motorsport. Whether or not it’s going to be successful, one thing will remain the same: the BMW i8 will still be the official Safety Car of the venue, wherever it will take place next.

The BMW i8 used as an official track car for the competition was modified to be able to cope with the job requirements. Compared to a standard model, quite a lot of things have changed, from aero bits and pieces to the way the car is being recharged. Under the carbon fiber body of the car hides a plate that allows it to charge wireless using technology from one of the sponsors of Formula E, Qualcomm. 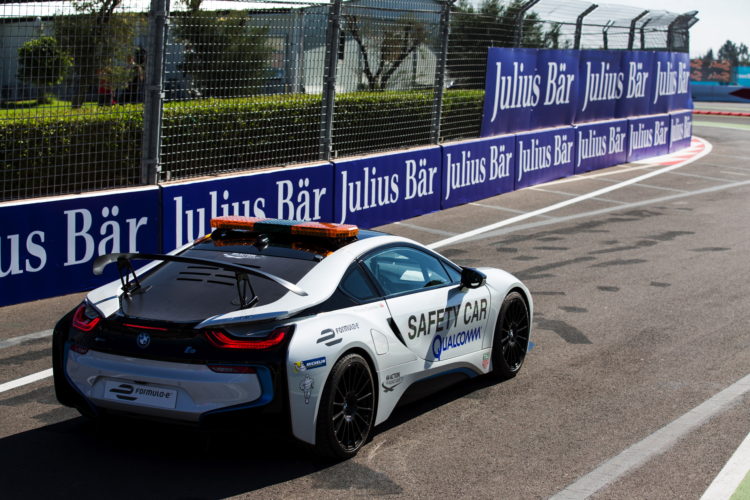 The wheels, tires and brakes were also modified to allow the car to go even faster while the boot received a huge adjustable wing that brings more downforce to the mix which may prove to be more than useful at high speeds. Unfortunately, no exact figures about the power developed by the hybrid drivetrain were offered but we are expecting the Formula E Safety Car to be quite more powerful than the standard model.

As for the i3, even though it isn’t mentioned here, the EV is being used in Formula E as a medical car, being able to intervene whenever necessary, to potentially save lives, as it is fitted with everything an emergency rescue team would need. Fortunately, so far, it wasn’t needed for serious crashes and, as BMW enters this competition, we’re hoping things will stay this way.