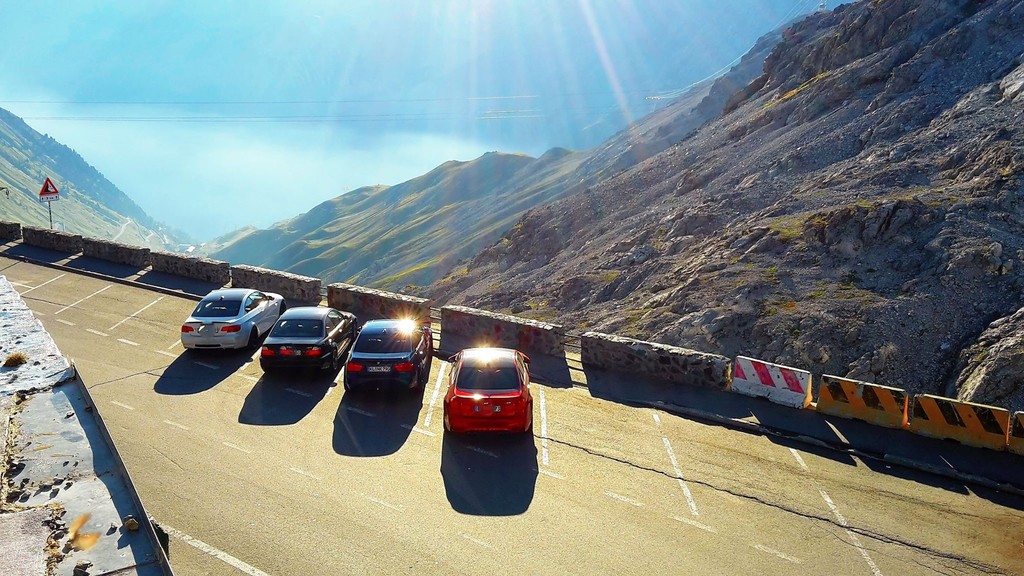 Myself and a few other ///M Flight members (one in an E46 M3, one in an E92 M3 and one in an F80 M3) began our convoy from the Frankfurt area of southwest Germany around 7am on Saturday morning. After stopping in Basel right on the German/Swiss border to top off our tanks, we headed into northern Switzerland toward Zurich. Despite a country wide 120kph speed limit on the highway’s, the good thing about Switzerland is the massive amount of long tunnels which made for some fun highway pulls that attracted some negative (and potentially very costly) attention. After our run-in (see: lecture) with the locals, we were let off with a stern warning and went on our way. We decided to play it safe at that point (at least until we got off the highways) and stopped for lunch soon after at a rest stop.

Shortly after passing by Zurich, we got off the highways and were greeted with some of the most amazing country I’ve ever seen, the Swiss Alps. The last 3 hours of our drive was back to back valleys, tunnels, switchbacks, long sweeping curves, climbs up mountains (and descents down the other side), lakes, rivers and waterfalls. The roads were so windy at this point of our trip that it took us about 2 hours to go the last 60km. I apologize in advance for not having any pictures of this part of the trip, but I was behind the wheel the entire time with no passenger so I was unable to photograph the Alps, but rest assured the scenery alone made the 7 hour drive worth it.

We finally made it into Italy, and began the trek through miles of tunnels and mountain passes to our house for the weekend in Bormio (about 20km from the top of Stelvio Pass). We finally checked in around 5pm, and after a long days drive decided it was time to put the cars away and get some dinner at Agriturismo Rini di Bormio before yet another long day driving the passes. My first time in Italy, this was obviously my first experience with real Italian food, and it was nothing short of amazing. Everything served to us was made fresh locally in Bormio that day. If you are ever in the area, do yourself a favor and check out this restaurant. You won’t leave disappointed.

On Sunday we decided to get up early (around 6am) to make sure we got to the pass before everyone else. This time of year, especially on the weekend Stelvio Pass is known to be packed with motorcyclists, cars and bicyclists. After a 20km drive along the SS38 from Bormio up the west side of the mountain through some nice sweeping passes, tunnels and switchbacks, we were amazed to find the pass nearly deserted when we arrived.

The view was divine as the sun came up over the mountain peaks, and after a short stop for breakfast at the peak (yet another amazing culinary delight) we decided to begin our long awaited drive down the east side of the mountain toward Trafoi (the section the pass is most known for, as featured on Top Gear).

The view from the top of the pass 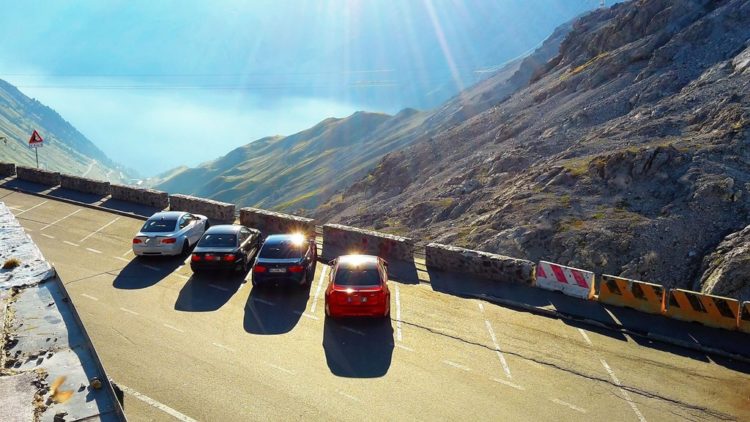 We stopped at the Berghotel Franzenshöhe, about halfway down the pass, and did another drive back up to the top before stopping for a break where we took some pictures and enjoyed the scenery. At this point it was around 9am, and the pass was beginning to show some traffic, so we made one more pass all the way down the mountain to Trafoi where we stopped yet again to take in the sights.

At the top of the pass, after our first run

The view coming back up the pass

Hitting the corners hard!
Resting at the Berghotel Franzenshöhe before continuing into Trafoi

Random picture near the Berghotel Franzenshöhe. Oddly enough, I have absolutely no recollection of taking this picture whatsoever, and I hadn’t had a drop of alcohol at that point.

I was amazed at how desolate the area was, surrounded completely by mountains everywhere you look. I knew this was the heart of the Italian Alps before embarking on this trip, but my expectations in no way prepared me for the reality of what I was experiencing.

The scenery in Trafoi = breathtaking!

After a short break, we headed further east toward Sulden, Italy, a nice drive through a “dead-end” pass. This pass was a little more forgiving, but was a nice drive to say the least and well worth the gas. After stopping for about 45 minutes, visiting a local grocery store for drinks (water and the alcoholic variety for later that evening back at the house) we got in our cars and headed back the way we came, and up to the peak of Stelvio Pass once again.

The drive up the pass this time was less fun, with it being filled with slow drivers, bicyclists, motorcycles and sight-seers on the side of the road. We finally arrived at the peak around 11am, and I was astonished at how busy it was. When we arrived that morning, there was no one in sight except restaurant workers. No cars, motorcycles or bicycles anywhere. Now it was like a booming metropolis with hundreds of people walking the streets, and motorcycles parked everywhere. After dodging pedestrians for a few minutes, we finally found parking on the west side of the peak, and got out to walk around and grab some lunch.

The top of the pass during rush hour

We had a bratwurst from Ernstl’s Bratwurst, a small food stand right in the center where all the shops are. My third experience with the cuisine in Italy was just as promising as the first two. Ernstl’s did not disappoint.

After lunch and a quick walk around the shops, we decided the pass was far too busy to get any enjoyment out of it, so we headed back to our cars and made the descent back into Bormio to finish our afternoon/evening with some drinks back at the house.

The view of our cars from our balcony, tucked away for the night

After having some vino, we decided to walk into the center of Bormio and find a place to get some dinner. Being in Italy we had to try out their pizza, and after some shenanigans while waiting for the restaurant to open (for some reason everything in Italy opens late, around 6pm-7:30pm) we got a table and enjoyed our last night in Italy.

Recommendations and After Thoughts

Top Gear named this road “the greatest road in Europe” in Season 10, Episode 1 which was in part the inspiration for our trip. Can I say I agree it’s the best? I don’t know, I haven’t driven every road in Europe, but I do know that while having a reputation for being a great drive, many sources consider a few other roads in Europe to be much better drives. I will say that if you ever find yourself anywhere near Stelvio Pass (i.e. within a 500 mile radius) it is well worth the detour to drive this amazing stretch of road, even if it’s in a rental car. Definitely get to the pass early (by 7-8am) and if possible, come on a weekday. The busiest time of year from my understanding is August-September, just before the pass closes for the winter. Yes, that’s right, the pass closes for the winter, because believe it or not (and I was shocked), there was still snow on the mountains that remains year round and never melts. After all, this is the second highest peak in the Alps.

It was a great time, and I am glad I had the opportunity to do it. I’ve driven the Nordschleife (Nürburgring) and the Hockenheimring, and while both are special, neither compare to this drive in my opinion.