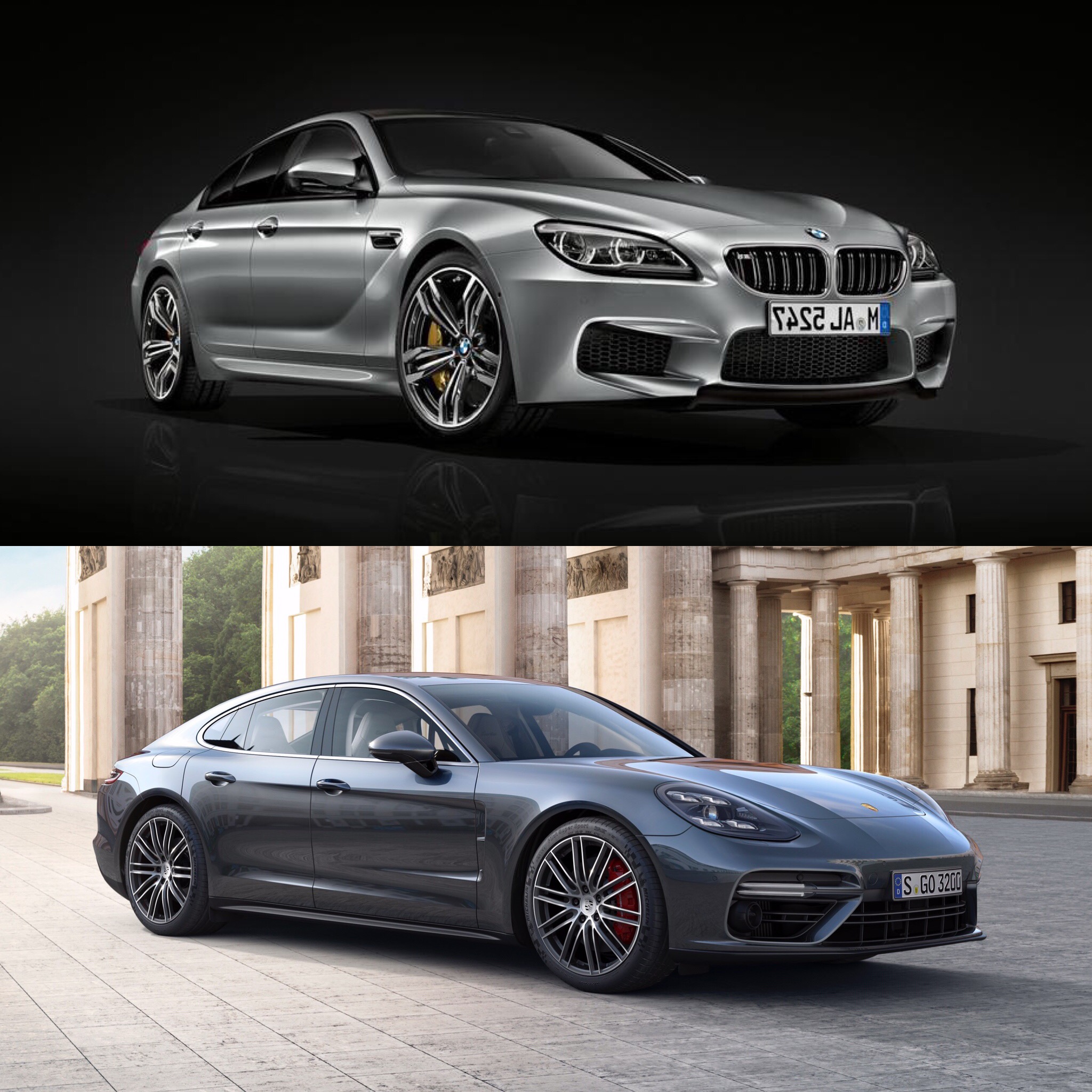 This all started with the Mercedes-Benz CLS Class almost a decade ago. The brand in Stuttgart felt that it would be a good idea to combine the styling of a coupe with the practicality of a sedan while making it good at being neither. It still wasn’t as sexy as a coupe and lacked the back seat space of a proper sedan. So it ended up being the answer to a question that nobody had asked. But it sold like crazy.

Since then, BMW, Audi and Porsche have jumped into the fold, developing their own four-door versions of two-door cars and all have had massive success doing so. To be honest, despite their relative uselessness, I’m very happy they did. BMW’s 6 Series Gran Coupe is one of the best looking cars on the road. Period. And its M6 GC is even better. So the world is a better place with cars like the M6 Gran Coupe even if they don’t bring all that much to the table.

Porsche’s first attempt at such a car was the Panamera a few years back. It was fast, handled incredibly for such a big car and was even supremely comfortable. It was a great car…as long as you were behind the wheel. From the outside, it was downright ugly. To be fair, only its rump was genuinely hideous, while the rest of the car was just ho-hum. But despite its frumpy looks, it was an instant sales success, becoming the brand’s second best-selling model ever, behind only the Cayenne SUV. 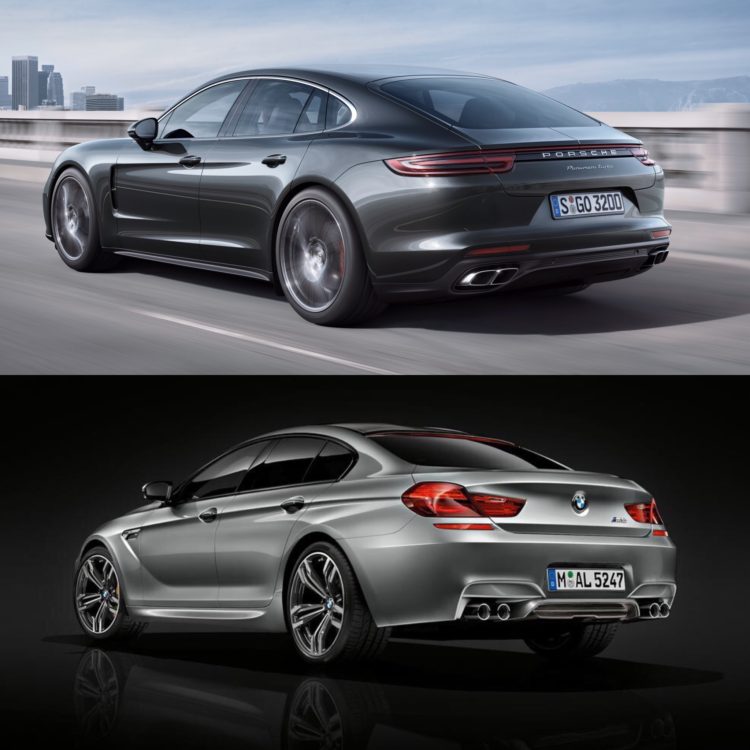 So for 2017, Porsche naturally decided to improve on the Panamera, giving it much better looks, improved engines and technology. This new Panamera is actually quite pretty, with Porsche nailing the four-door-911 styling it was originally going for. And now that its looks finally match its dynamics, how does it stack up against BMW’s pretty and talented M6 Gran Coupe?

On paper, the Porsche Panamera Turbo and the BMW M6 Gran Coupe match up quite well. Both have twin-turbocharged V8s, with the Porsche displacing 4.0 liters and the BMW 4.4. Both have seven-speed dual-clutch gearboxes, similar power figures (550 for Porsche and 560 for BMW) and both can get from 0-60 mph in well under four seconds (3.6 for Porsche and 3.7 for BMW). The reason that the BMW M6 GC is a touch slower to 60 mph, despite having more power, is likely that it only drives its rear wheels whereas the Porsche drives all four, giving it better traction.

They’re also both very sleek looking, very pretty four-door coupes with seating for four adults and supreme luxury. The back seat is nice in both for two adults, and both have a lovely center console for rear passengers. It’s the driver’s seat of both cars that you want to be in. Both have endearing cockpits with great technology. The BMW M6 Gran Coupe’s cabin is fantastic, filled with rich leather and contrast stitching, while the Porsche Panamera’s is more chic and fresh with a more modern feel. So both are great, but suit different tastes.

We obviously can’t say how the Panamera drives, considering that no one outside of Porsche has driven it. However, we do know it ran a 7:38 lap time at the Nurburgring, making it the fastest luxury sedan around the famous track. So it’s certainly fast and highly capable, but we don’t know how it actually drives from behind the wheel. Being a Porsche, we’re going to bet that it drives with extreme precision and boasts sports car agility, as per usual. 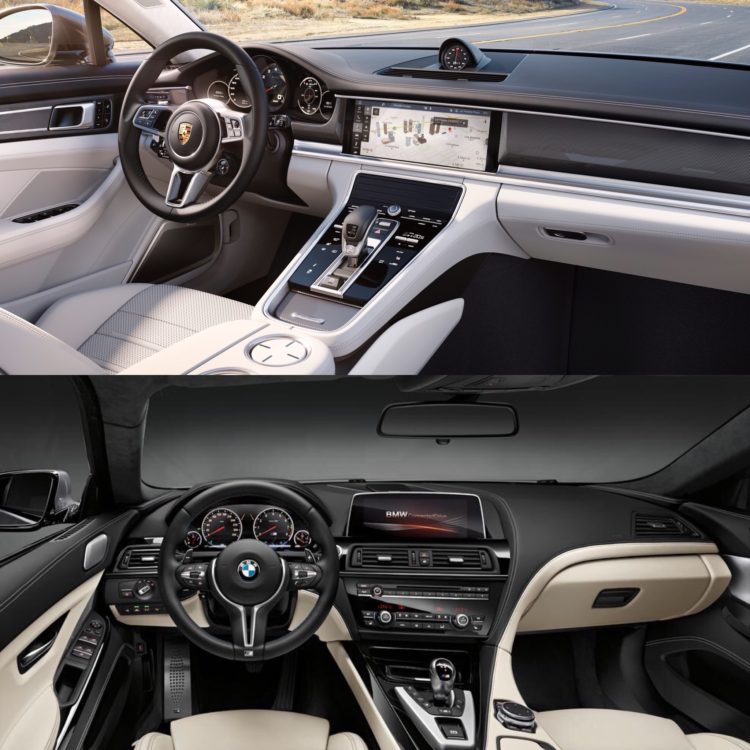 But so does the BMW M6 Gran Coupe. The M6 GC might not be capable of such a blistering ‘Ring time, but it’s certainly no slouch. The M6 Gran Coupe is said to be one of the best driving M cars currently on the market. In fact, before the M2 debuted, some said it was the best driving M car. It really is a lovely thing to drive and feels like a proper BMW M. So it should have no problem going toe-to-toe with Porsche’s latest entry.

But these two will only combat each other for so long. The next-generation BMW 6 Series will likely not get a Gran Coupe variant and will be more of a sporty coupe in line to take on the Porsche 911. There’s rumored to be a BMW 9 Series coupe-like sedan that could take the M6 Gran Coupe’s place, but we don’t know for certain.