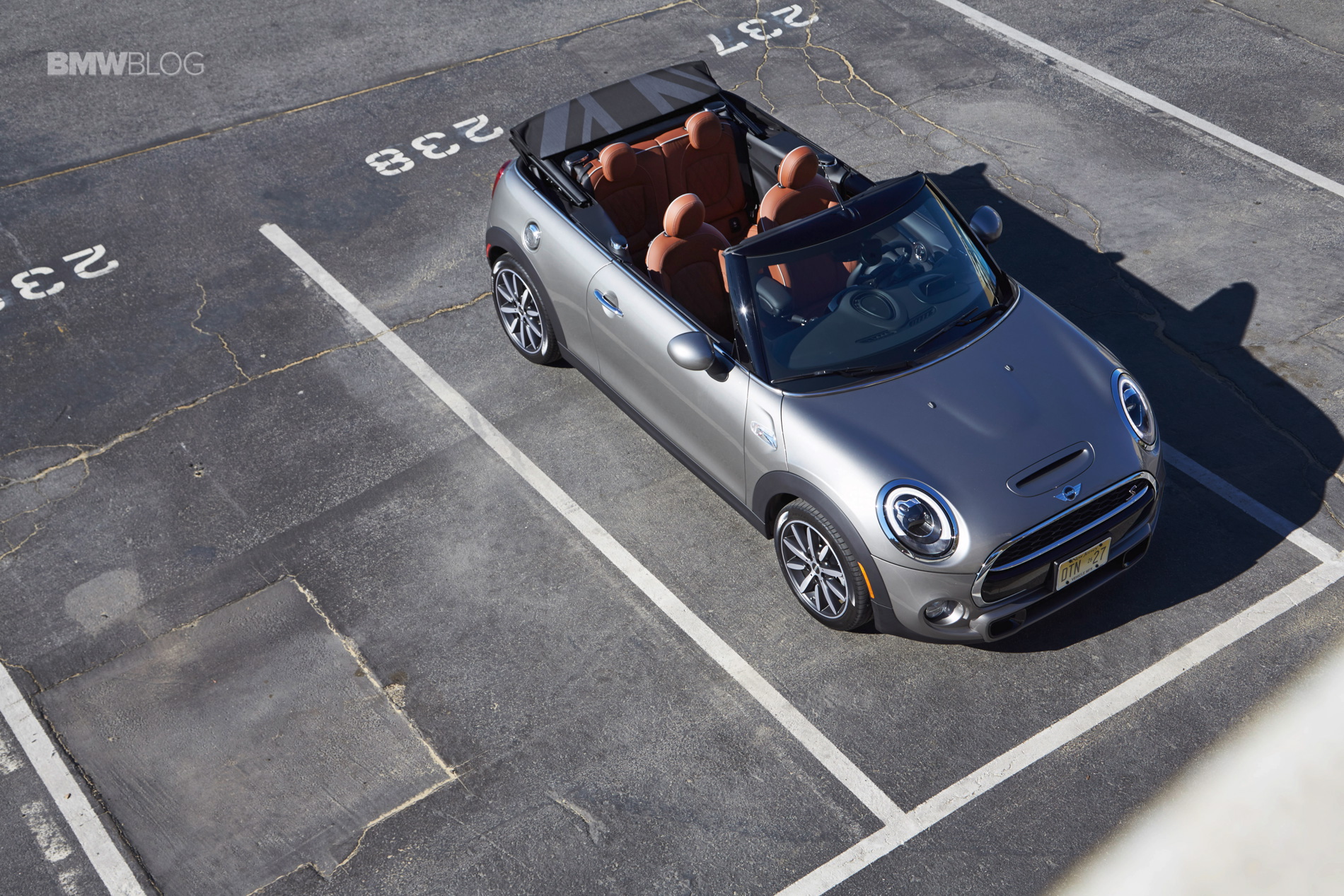 A few months back, MINI allowed some journalists to sample the new MINI Cooper S Convertible in the beautiful and sunny California. These lucky journalists were treated to sunshine, gorgeous open roads and breathtaking scenery while they played with some fun, droptop MINIs. However, for some of us East Coast journos, MINI recently treated us to…New Jersey, the land of oil refineries, bumper-to-bumper traffic and road surfaces as smooth as a 19 year old’s pick up lines.

All kidding aside, we were actually driving though some of New Jersey’s more beautiful sections, as shocking as that phrase might be, there are some very pretty places in the Garden State. Journalists were ferried from Manhattan to Sandy Hook, NJ, at Fort Hancock, the former US Army base dating back to WWII. It was pretty remarkable to see all of the canons and artillery that’s been sitting for over 70 years and was put there to defend the possible Axis invasion on the US. 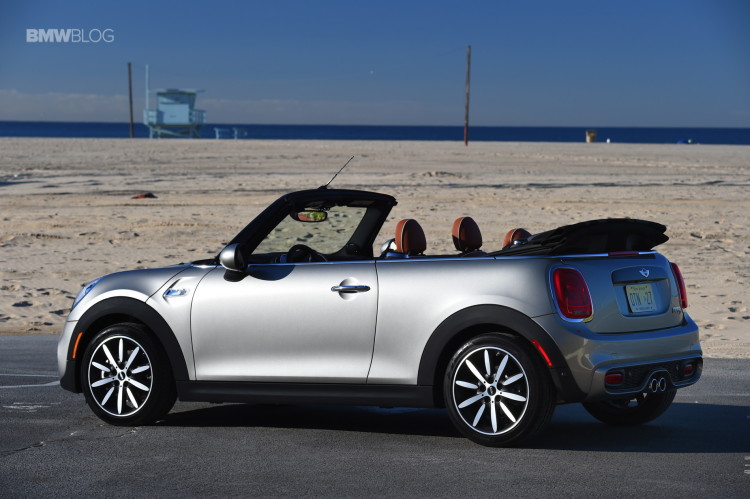 From there, we hopped in a MINI Cooper S Convertible and headed out to Long Beach Island, a beautiful little barrier island off the coast of NJ. The drive featured a nice mix of little back roads, through some of NJ’s more prestigious towns, and some highway driving. We were able to get a good impression of how the car felt on a variety of different roads and, being NJ, different road surfaces as well.

Although, we drove exclusively with the top down, as it was the single day in the past month or so that was actually clear skies and sunshine, so I can’t comment on how it drives with the top up. However, with the top down the MINI Cooper Convertible felt rock solid with no shakes or shimmies throughout the cabin, even over broken NJ pavement. It’s an impressively solid car, more so than its competitors, like the Audi A3 Cabriolet.

On the way to LBI, I drove a MINI Cooper S Convertible, with the 2.0 liter TwinPower turbocharged engine that makes 189 hp and 207 lb-ft of torque. Unfortunately, I was only able to sample a six-speed automatic variant, although a six-speed manual is available and recommended, however I’ve used this powertrain setup before and it’s not a bad setup. If you can get over driving an automatic MINI, it’s still very fun to drive. Steering is meaty and very direct, turn-in is crisp and sharp and the go-kart feel that MINIs have always had remains with the convertible. It really just feels like driving a MINI Cooper S with a massive sunroof, it’s that solid and refined. 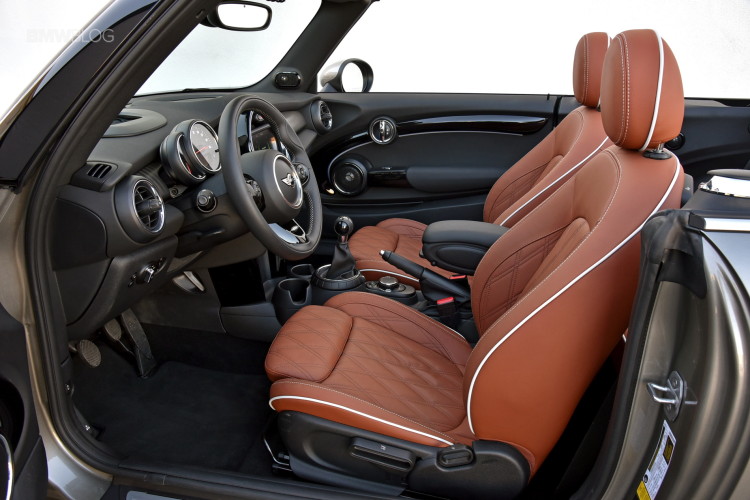 After a brief lunch at a gorgeous house in LBI, right on the beach and overlooking the ocean, I hopped in a MINI Cooper Convertible, with the tiny little three-pot engine, to give it a try. The 1.5 liter three-cylinder TwinPower turbocharged engine in the MINI Cooper might raise some eyebrows from car enthusiasts, but only those that haven’t driven it. The little three-pot engine is hilarious good fun to drive. Although it only has 134 hp, it’s plenty quick enough, makes a great little buzzing noise and is one of the more charismatic engines I’ve driven in a long time. It has almost a diesel-like rumble at idle and makes this buzzsaw like noise as the revs climb. I loved it. In fact, I think I prefer it to the larger 2.0 liter engine, despite its power disadvantage, as it has a bit more character. Again, I was only able to sample an automatic, which is more of a shame with this engine as a manual would make it an absolute riot, but it was still the car I had more fun in.

In terms of looks, the MINI Cooper Convertible looks about as good as a convertible MINI can look. It’s pretty familiar and still looks like something your wacky aunt would drive, but this newest iteration is the best looking MINI ‘vert yet. On the inside, though, I continue to be amazed by MINI. With materials and build quality that genuinely rival BMWs, regardless of how the Bavarians feel about that, the cabin of the Cooper Convertible was a lovely place to be. Shut the door, even on these convertible models, and it closes with a reassuring whoomph. The seats were great, the driving position is spot-on and all of the materials within arms reach are top-notch. My most recent BMW drive was that of a 328i Sports Wagon and I can’t say that it was much better on the inside than the MINI Cooper S. There’s no doubt that MINI makes the nicest interior in its class by far and away. 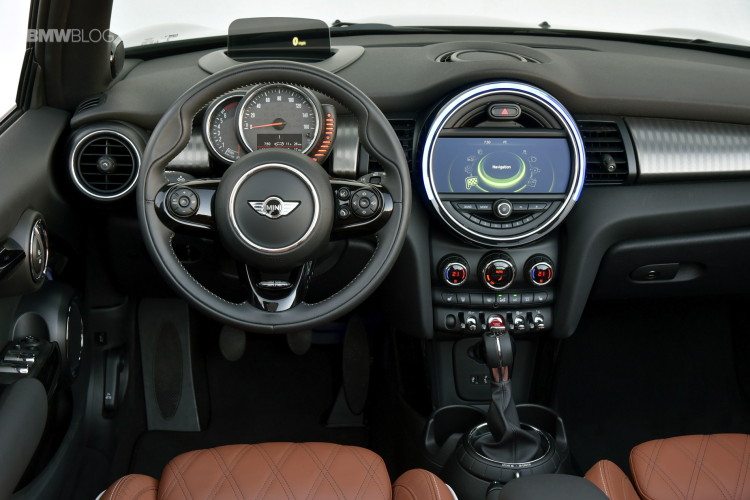 Are there drawbacks? Of course, like anything else. Some of the ergonomics are a bit wacky, but that might be more MINI charm than an actual drawback. Although, some things do get annoying. The Convertible’s windshield is at a more upright angle than the Hardtop’s, so the rear-view mirror is oddly far away and required quite a bit of a reach to adjust. The controls for the interior lighting suffer the same fate and someone as short as me would have to sit up from their seat to use them. And one of my personal gripes with all MINIs is that the instrument cluster is a bit convoluted and difficult to read while driving quickly.