Mid-sized executive diesel sedans (or saloons if you’re across the pond) have always been some of the most popular luxury vehicles available for purchase. Cars like the BMW 5 Series, Mercedes-Benz E Class, Audi A6 and now Jaguar XF have been at each other’s throats for ages now. So this test is nothing new, but it is important. 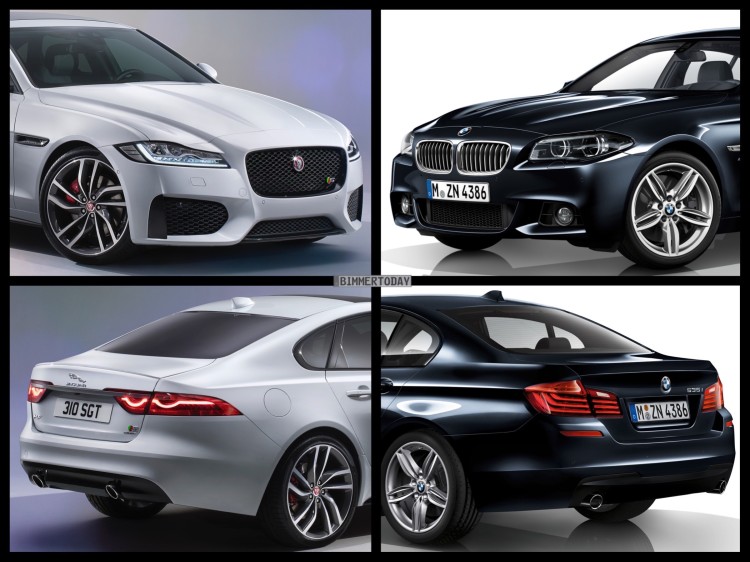 The current F10 BMW 5 Series is starting to show its age, especially in the company of its newer competitors. The current 5er has already been on sale for over five years and it feels like it. However, the old-dog can still keep up with the younger litter, as it still offers a fantastic blend of performance, comfort and luxury. But its competitors are catching up severely, even besting it in some areas. But, as we’ve stated many times in the past, these things are cyclical and the 5 Series was destined to be beaten by a newcomer eventually.

And those newcomers that are taking their shots at the Bavarian king in this test are the Jaguar XF 2.0 R-Sport and the Mercedes-Benz E220d SE.

In this test, the BMW 520d is the oldest by far, as it was released in 2011, while the Jaguar XF was released late last year and the Benz early this year. So you’d expect the Benz and the Jag to walk all over the geriatric BMW. However, the fight is closer than we originally thought it would be.

In terms of looks and design, the Jaguar is probably the best looking car of the test, as Jags typically tend to be these days. It’s exciting and dynamic, it looks thrilling to drive and is the most desirably looking of the three. The Mercedes is downright boring by comparison. While the E Class is still a very handsome and attractive car in its own right, it looks a bit milquetoast in this company. By comparison, the BMW 5 Series just looks dated. It’s still a good looking car, but one we’ve seen about one zillion (scientifically accurate number) times already, so it’s getting a bit staid by now. However, it’s still more interesting looking than the Benz.

On the inside, the three cars start to separate themselves a bit more. The BMW 5 Series’ familiar interior is still very handsome and ergonomically spot-on with probably the best seats in the class. However, much like the exterior, it’s getting a bit boring. It was spectacular in 2011, but in 2016 it’s old news. The Jaguar feels most like a sports car from the helm. Its seating position is the lowest of the bunch, with a high center console and high door sills, making it feel low-slung and sporty. Aesthetically, the XF’s interior is gorgeous and exciting, but it lacks the sort of rich materials and high build quality the other Germans seem to have. The new E Class, on the other hand, is superbly built, filled with some o the richest materials in the segment and is genuinely a beautiful place to be.

In terms of engines, the new E Class gets a new 2.0 liter turbocharged four-cylinder diesel engine, developing 192 hp and 296 lb-ft of torque. It’s a much smoother mill than the previous E Class’ 2.1 liter and it’s makes the new E Class the quickest of the bunch to 60 mph, doing the run in 7.3 seconds. BMW’s familiar 2.0 liter turbo-diesel is still a thing of joy, though, Buttery smooth and immediately responsive, though its lower 187 hp rating makes it a bit slower than the Benz to 60 mph, with a 7.9 second time. The Jag XF’s 2.0 liter diesel is the coarsest of the bunch and the laziest, getting the big cat to 60 mph in 8.3 seconds. However, all three are great engines.

When it comes to handling and dynamics, all three have very different personalities. The Jaguar XF is immediately recognized as the athlete in the group. With excellent steering, a taut suspension and superb reflexes, the Jaguar XF is the most fun car in the test to drive. However, it is the most uncomfortable. The Benz, on the other hand, is the polar opposite. With a calm and sedate ride, the E Class just wafts its passengers along, isolating them from any road imperfection with long suspension travel and cushy damping, but it isn’t very fun to drive. The 5 Series tends to split the difference and be both fun and comfortable. Being the best of both worlds means that the 5er is inherently compromised a bit at both, but does both well enough to be an excellent all-rounder.

Overall, Autocar deemed that, despite it being the newest car here and the one with the nicest interior, the Mercedes-Benz E Class was the third place car in the test. It’s the car with the most singular focus, one of pure luxury. Admittedly, it does luxury much better than the other two, but it only does luxury and that’s what puts it last. The BMW 5 Series takes the middle-man spot, being great at both sides of the coin, but it’s showing its age a bit too much to be the best in the segment. While the Jaguar XF takes the first-place spot, thanks to its exciting dynamics, stunning looks and ability to be both comfortable and sporty, even if it does lean more toward the sporting side.