Car Throttle compares the BMW 340i vs Jaguar XE S

When Jaguar announced that it was going to be creating a small saloon (sedan in British speak) that could compete with the BMW 3 Series, many scoffed at the idea. A Jag taking on the 3 Series? Last time Jag tried to do that it gave us the X-Type and we all know how that turned out. But Jag did give us the XF and that turned out quite well, so there was hope for the XE. Then the Jaguar XE debuted and it was instantly surprising. It was genuinely capable of competing with the 3 Series. So what happens when you take the most fun variant of both the Jaguar XE and BMW 3 Series together for a comparison? CarThrottle got them both together to find out.

The Jaguar XE S and the BMW 340i. Both cars are the most powerful versions of their model lines currently on sale (excluding any M or R models), so both are the most fun and dynamics variants of their respective models. On paper, they’re pretty similar cars. Similar in size, both have forced-induction 3.0 liter six-cylinder engines, both have ZF-sourced eight-speed automatics, both are rear-wheel drive and both get from 0-62 mph in around 5.1 seconds. So, on paper at least, they seem very comparable.

Where they start to differ is in how they perform. The Jaguar XE S has a more linear powerband, with its supercharged 3.0 liter V6, while the BMW 340i feels faster because its 3.0 liter turbocharged I6 has torque that comes in more suddenly and stays on boil throughout the rev range. Both do 0-62 mph in the same 5.1 second time, but the Bimmer feels more sudden and alert, thanks to its flatter torque curve. the BMW also has a better sorted automatic gearbox. They both use the same ZF eight-speed, but BMW’s is better calibrated and makes smarter shifts, while Jag’s actually shifts a bit quicker.

In terms of handling, it’s quite complicated and both cars trade blows back and forth. Whereas the BMW 340i has less body roll and feels like there capable car, the Jaguar XE S has better steering and a more comfortable ride. Both cars are exciting and dynamic, but in different ways. The 340i’s ride is worse and its steering more numb, but the Jag tends to understeer at the limit and rolls too much in corners. So there are tradeoffs for each car and it would likely come to preference. CarThrottle prefers the Jag in this test, but many customers might prefer the BMW. 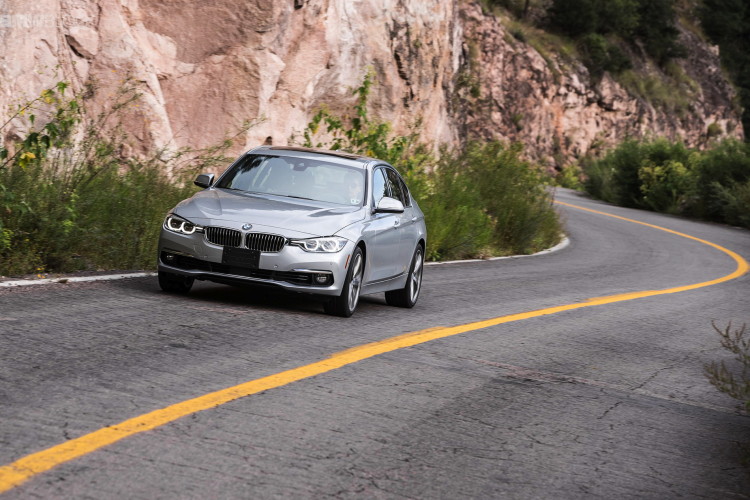 The BMW 340i also has a more sorted and better build interior. Whereas the cabin in the XE S is very attractive and has a premium, and exciting look to it, its infotainment system is pretty bad and some of its materials seem poor. However, the 340i is the exact opposite as its controls and materials feel superb and its iDrive system is vastly superior to the Jag’s. But it doesn’t look different from any other BMW and it doesn’t look as exciting as the Jag’s. So again, both cars trade blows.

Overall, it seems that the two cars match up against each other very well, with each car excelling at what the other fails at. They’re almost polar opposites while also being nearly identical. Two halves of the same puzzle, if you will. CarThrottle claims that it really comes down to the BMW 340i being a “head” car, meaning that it’s the car your brain would tell you to by because it does everything well. But the Jaguar XE S is a “heart” car, being the car that your emotions tell you to buy because it’s more exciting than the competition. In the end, CarThrottle chooses the Jag as the car they’d rather have, as it’s the car that makes them look back at it when walking away. But the BMW 340i is still a superb car and one that can hang with the much newer competition.