In Europe, big executive saloons (sedans here in the ‘States) with diesel engines are incredibly popular. Why wouldn’t they be, they feature fantastic luxury, great performance and excellent fuel economy? It’s hard to see why anyone wouldn’t buy these cars. So it’s understandable that the segment is as competitive as it is. For a long time, the BMW 5 Series has been the king of this segment, with good reason. It’s silky smooth diesel engines, quiet and luxurious cabins and space for a family makes the BMW 5 Series diesel and excellent executive luxury saloon. But recently, Jaguar has had something to say about that.

The first Jaguar XF was a very good car. It had sharp handling, stunning looks and a lower price point than the BMW 5 Series. But it lacked refinement, interior quality and some luxury in comparison to the 5er. So it didn’t sell as well. However, Jaguar has now come out with a new XF that looks and feels very much like the old XF, just better in every way. Jag hasn’t messed with the formula, the new XF is still a stunner, prioritizes handling over luxury and is still a bit compromised in interior space. However, its cabin is much improved, though still not up to 5 Series standards, and it does have a usable back seat now. So it’s a quality contender to the BMW 5 Series.

Autocar has pit these two cars, in their most popular diesel variants, against each other; The Jaguar XF 3.0d S and the BMW 530d M Sport. 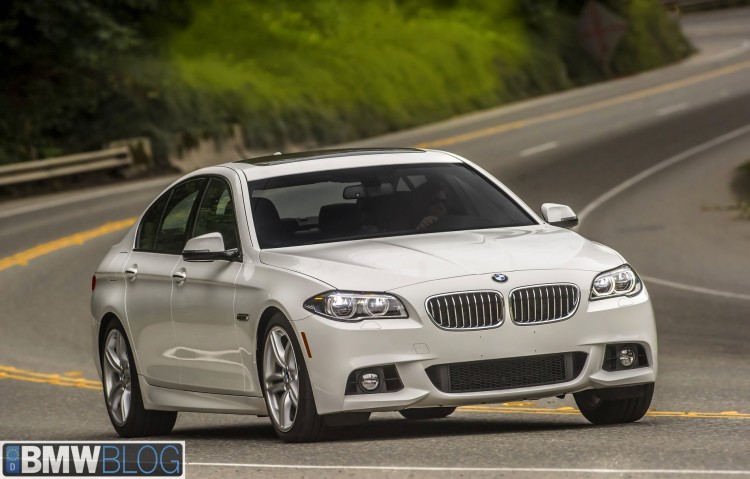 The Jag puts up better numbers, with 296 hp and 516 lb-ft of torque from its 3.0 liter V6 turbo-diesel engine. That allows it to shuffle from 0-62 mph in 5.8 seconds. That’s damn good for also being able to get 51.4 mpg on the Euro cycle. However, the BMW, with its comparatively measly 255 hp and 398 lb-ft of torque, does the sprint to 62 mph in the same 5.8 seconds and returns the exact same 51.4 mpg. And the 530d is 35 kg heavier than the XF, so that just proves that it doesn’t matter how many horses and engine has, what matters more is the delivery of said horses. The 5er’s engine also got top marks for quality and smoothness.

In terms of handling, both cars were deemed great, but the Jaguar edged out the BMW by just a bit. Sharper steering and a better front end made it the better handling car of the two, but the 5 Series is still a great driving car. The fact that the 5er is still built on the previous 7 Series’ chassis probably has something to do with its slightly inferior handling.

The only real issues with the Jaguar XF, according to Autocar, are minor and things that can be fixed with updates, like the somewhat finicky touchscreen infotainment system and some material quality throughout the cabin. But Jag seems to have won this test and is the better car of the two. It’s a bit unfair, as the current BMW 5 Series is on its way out and a new one will be replacing it soon, but as it stands now, the Jaguar XF seems to be the better executive saloon.