Is the E36 M3 the best budget track day BMW?

It’s no secret that BMW enthusiasts are fans of the race track. Basically, the whole purpose behind buying a BMW is to buy a luxury car that’s sportier than pretty much every other luxury brand. The natural extension of sporty driving is racing, so BMW makes many its cars with track capability in mind. The M3 is pretty much the go-to track car for most BMW enthusiasts, as it’s the best performing car wearing a blue and white roundel.

But you don’t necessarily want a brand new M3 for track use. Unless you’re Warren Buffet, it’s hard to be able to afford a near $70,000 car to beat on at the track. Track days are hard on a car and cars typically don’t last very long without constant repairs if tracked regularly. So you wanna go with a slightly older model, or even a very old model, depending on your budget. But even still, not many people have $20,000 to build a car just to beat the crap out of it on a race track. So which BMW would be the best to create a track car out of while on a tight budget?

Matt Farah of The Smoking Tire, has recently driven someone’s E36 M3 track day creation and it seems like it could be the best bang-for-you-buck track car value in the universe. Admittedly, to build a great track car, regardless of the car, you must be smart about things and put the money from your budget into the right things, as this owner did. Having an E36 myself, I can attest to his claim that the coolant systems in them are junk, especially for the track. It’s the most finicky and unreliable cooling system I’ve ever come across and this owner is brilliant for upgrading it dramatically. He uses a Mishimoto radiator, which is expensive by worth every penny, and high-flow water pump. This allows the M3 to not only be fun, but also reliable, at the track.

This M3 also has a short throw shifter, new coilover suspension and an upgraded exhaust. But nothing too crazy, just simple mods. The purpose of this was to keep the build reliable and be able to drive it to the track, beat on it and then drive it back home again without an issue. He even kept the air conditioning in the car, which most people take out to save weight. He admits that this E36 M3 isn’t the fastest car on the track and is more of a momentum car, but also that it’s fun as hell. It looks fun and, with the way Farah drives it, looks fast as well. 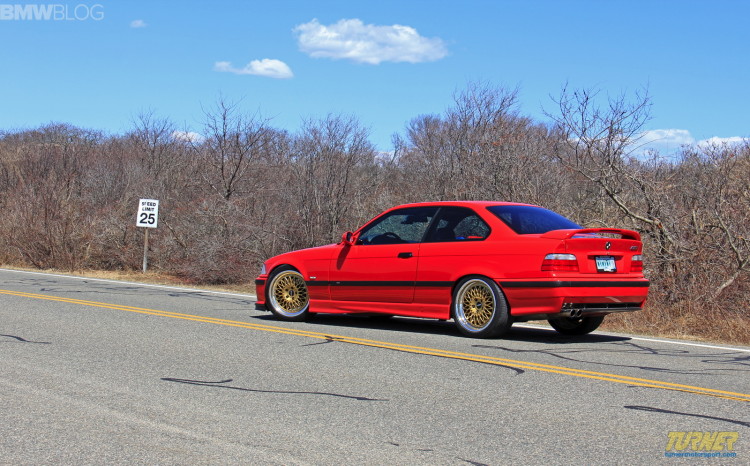 The entire build cost this owner $10,000, which is pretty good by track day standards. While that’s not exactly cheap, you’d be hard pressed to find a track car that’s as much fun as that for less money and it’s damn near impossible to find one that will be as reliable. Sure, you can go on Craigslist and find a crummy car for $1,000 to beat on a track and it will probably work. Once. But not over and over again while also being a decent daily driver. But, if you do want something like this M3 but for less money, don’t put in the expensive short throw shifter or fancy coilover suspension. Keep it relatively stock, but put some money into the cooling system and have a blast. Because the track is about having fun, not necessarily lap times.

The E36 M3 wasn’t the best M3 of all time, in fact it’s probably the worst considering how great all the others were, but it’s one of the most fun track day cars you can buy on a budget. If you’re looking for a track day car and don’t have tons of money to spend, look at the E36 M3. Just be prepared to overheat.