It doesn’t seem that long that BMWBLOG was in Canada driving the then ‘soon to be released in the US’ BMW X1. And it is hard to overestimate the appeal of the reasonably priced current generation X1 on perspective conquest sales from less premium examples of ‘cute utes’.

But the existing X1 doesn’t have the interior space that customers expect. Chalk that up to the excellent rear wheel drive platform the X1 is based on – and a less than optimal height for an SUV, errrrr Sports Activity Vehicle.

The upside to using the UKL platform for the X1 is enhanced interior space, both passenger room and cargo space. This moves the X1 more inline with its competition. And that competition comes mainly from the Lexus NX series, the Mercedes-Benz GLA, and the Acura RDX.

The info for the new X1 shows a number of models with in-line 4 cylinder engines in gasoline or diesel flavors. BMW North America will sell an X1 xDrive28i (with a potential X1 xDrive20i to follow at some point). It is hard to see BMW NA wanting to bring in the sDrive versions of the new X1 since the FWD 2 series Gran Tourer is not imported.

So just what is BMW facing from the competition?

Dispensing with the Acura first, the RDX employs a 3.5 liter i-VTEC V6 with cylinder deactivation (to 3 cylinders under specific load conditions). The six puts out 279 HP and 252 lb-ft of torque. The V6 is coupled to a six speed automatic transmission. And subsequently it does not have the best fuel economy of the bunch with a 19/22/28 city/highway/combined EPA rating in AWD. It comes in either FWD or AWD, with the FWD version providing better fuel economy.

Where the Acura seems to fall furthest behind its competition it is in its interior appointments. Features are decent and the high mounted 8 inch navigation screen looks good. But it seems to be a generation behind in overall appearance. A bit of a fussy two screen affair shows up as the optional navigation system is just above the 5 inch multi-use display (a question of why aren’t those features incorporated into the navigation screen?). The Acura RDX is the competitor most in need of an updating. But with it’s V6 it’s quick – with around 6 second 0 – 60 times in AWD.

The Lexus, based on the Rav4, shows all of the Lexus exterior design queues as well as luxurious interior. The feature reach interior sports an analog clock and large seemingly free-standing high mounted navigation screen. This looks like a nice place to be – nice materials and a suite of luxurious features. Where the NX stumbles a bit is in weight – it surpasses 4,000 lbs.

Then there is the Mercedes-Benz GLA (and unmentioned is the AMG version of the GLA – it is another league altogether). The GLA has been good for Mercedes-Benz. It utilizes a 208 HP 2.0 liter turbo four cylinder coupled to a brilliant 7 speed DCT. In AWD form it well do 0 – 60 in under 7 seconds. The AWD system can send up to 50% of the engine’s torque to the rear.

The interior of the GLA is superb – a handsome dash with a central high mounted navigation screen. Jewelry like vents and a busy center stack (but true to Mercdes-Benz) stand out. The seats look sporting and the available dual moon roof is a nice touch. The GLA is light, coming in at under 3,500 lbs and that helps its performance. 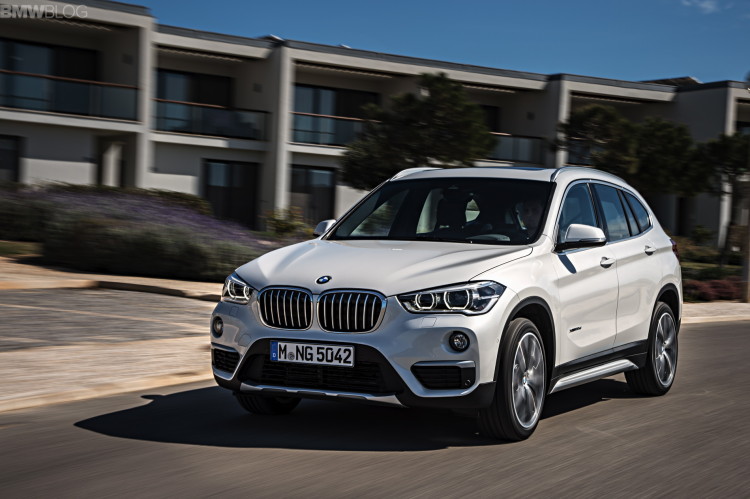 Where the new X1 lands in regards to its competition is one the plus side from a technology perspective (with enhanced connectivity and an available Head-Up display – heretofore reserved for the bigger vehicles in the BMW lineup). It also will be just a smidgen heavier than the GLA but several hundred pounds lighter than the NX or RDX.

The BMW uses a new 8-speed Steptronic automatic transmission developed by Aisin coupled to an AWD system capable of sending 100% of torque to the rear wheels. Fuel economy should be as good or better than the rest subsequently. Also, look for 0 – 60 times that will be at least as good as or not better than either the GLA or RDX.

As far as the new X1’s interior is concerned it is fabulous, check out Nico DeMattia’s take on it.