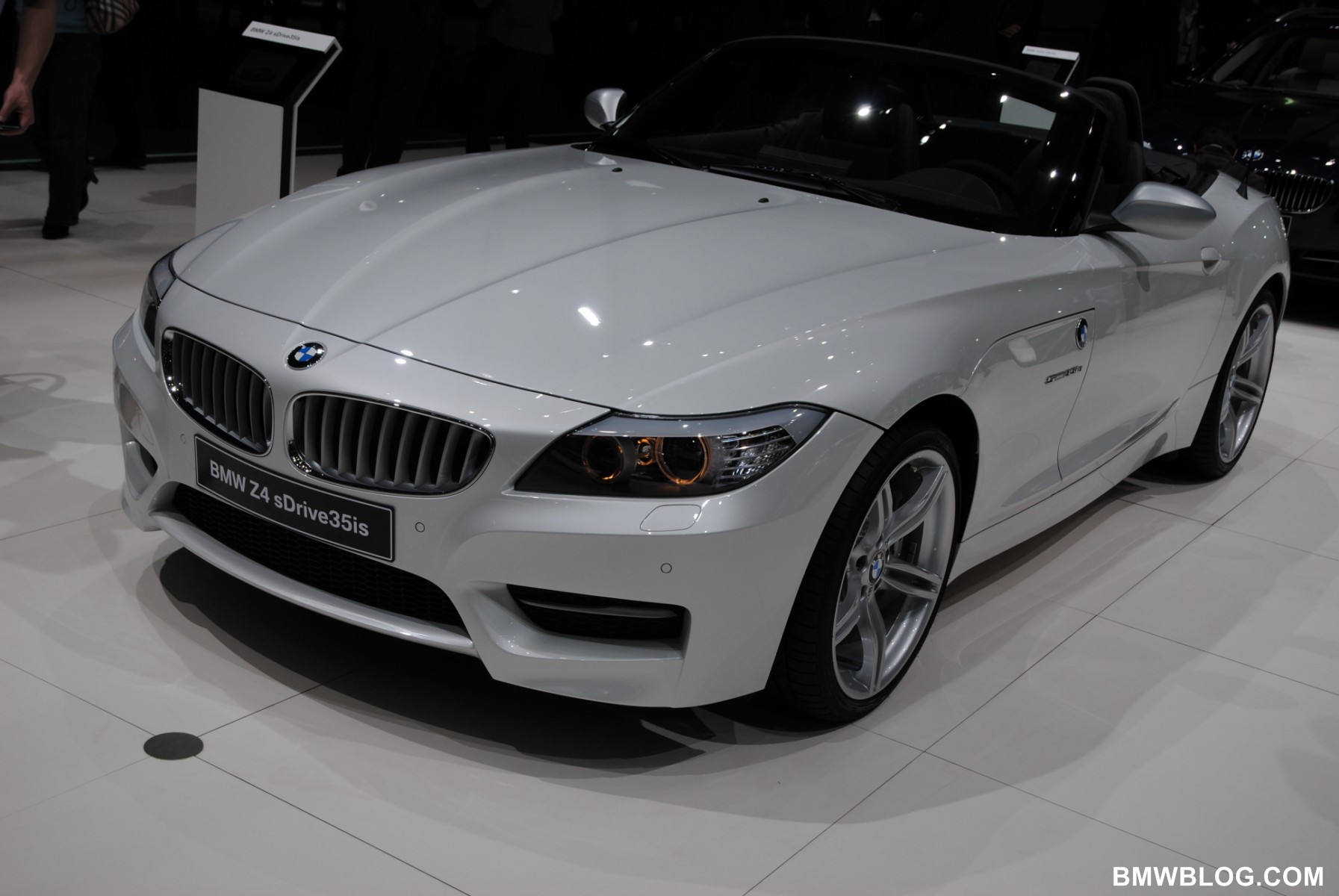 Starting September 2011, the BMW Z4 Roadster goes through some changes under the hood. The new N20 four-cylinder TwinPower engine will replace the inline-six unit found in the sDrive23i and sDrive30i models. The two new models will be sold under the sDrive20i and sDrive28i badges. For more details on the upcoming changes, see the press release below: 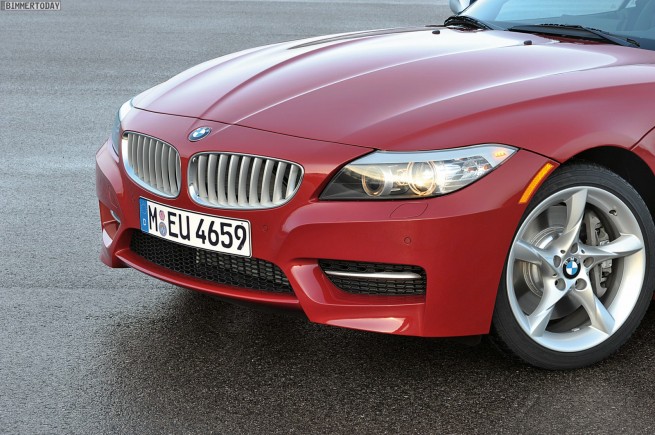 Combining improved efficiency and performance with a simultaneous reduction in fuel consumption and emissions, the new 135 kW/184 hp and 180 kW/245 hp engines are also lighter in weight thanks to an all-aluminium crankcase. This reduces the load on the front axle, for improved agility and handling. The BMW Z4 is equipped as standard with a six-speed manual transmission, but optionally the new engines can be combined with an eight-speed automatic transmission. All models in the BMW Z4 range will in future feature Servotronic speed-sensitive power steering as standard.
The BMW Z4 sDrive 35i will also get 18-inch multispoke alloy wheels. The popular roadster range will also be available with the new Design Pure Balance equipment package for extra styling enhancement. Exclusively in combination with this package, Mineral White metallic paintwork is available.

The new four-cylinder petrol engines are key components in the BMW EfficientDynamics strategy, which aims to combine increased driving enjoyment with reduced fuel consumption and emissions. Both versions are based on the same reduced-friction 1997 cc core engine, their different output ratings being due mainly to different injection and turbocharging technology. Key features of the world-exclusive BMW TwinPower Turbo technology include High Precision Injection direct injection, twin-scroll turbocharging, Double-Vanos variable camshaft timing and VALVETRONIC variable valve timing. These features give the new four-cylinder engine the sort of power which in a naturally aspirated engine would require more cylinders and larger displacement. At the same time, with their all-aluminium crankcase, these engines are lighter and more compact than a six-cylinder engine of equivalent power. This has obvious benefits for driving dynamics: the reduced load on the front axle results in greater agility and further improved steering and cornering characteristics.

In the version fitted in the new BMW Z4 sDrive28i, the 1997 cc four-cylinder engine develops maximum power of 180 kW/245 hp at 5,000 rpm, which is almost a match for the 190 kW/258 hp six-cylinder unit it replaces. And on torque it actually goes one better. With peak torque of 350 Newton metres (258 lb-ft) (+40 Nm / 29 lb-ft), which is available from 1,250 rpm, the new engine is noticeably more responsive. The lively power delivery from just above idle continues all the way into the higher engine load range. The resulting 0 to 100 km/h (62 mph) acceleration time for the BMW Z4 sDrive28i is just 5.6 seconds, which is 0.1 seconds faster than for the predecessor BMW Z4 sDrive30i (0.4 seconds faster for automatic versions). The new four-cylinder unit also offers better in-gear acceleration. Top speed remains unchanged at 250 km/h (155 mph).

Despite the performance upgrade, the roadster also boasts substantially improved fuel consumption. Average fuel consumption for the BMW Z4 sDrive28i in the EU test cycle has improved by an impressive 1.7 litres – or 20 per cent – to 6.8 litres/100 km (41.4 mpg imp). And there is a corresponding reduction in CO2 emissions, which now stand at 159 grams per kilometre.

The new four-cylinder engines also feature twin-scroll turbocharging. This means that the exhaust stream from cylinders 1 and 4, and the exhaust stream from cylinders 2 and 3, follow separate spiral-shaped paths to the turbine wheel. This reduces exhaust back-pressure at low engine rpm, allowing the energy of the exhaust gas pulses to be utilised as efficiently as possible. The result is instant throttle response and typical BMW fast-revving performance.

The BMW Z4 sDrive28i and BMW Z4 sDrive20i are equipped as standard with a six-speed manual transmission. Optionally, however, drivers can now leave the shifting to a new eight-speed automatic transmission which is very similar in terms of size and weight to the previous six-speed unit. The two additional ratios provide an appreciable improvement in smoothness, sporty performance and efficiency. All automatic versions feature a sports steering wheel, which is equipped as standard with paddle shifts, so that the driver can also shift gears manually. The right-hand paddle is used for changing up and the left-hand paddle for changing down. A restyled selector lever is standard with the eight-speed automatic.

The new eight-speed automatic transmission features fast reaction and shift times, direct downshift capability, minimal torque converter slip and low friction losses, along with a wide ratio spread that has benefits both for sprinting performance and for low-rpm cruising. The electronic transmission controller allows the shift characteristics to be altered as required, to cater for a sporty or a more relaxed driving style. Improved overall efficiency means that the BMW Z4 with eight-speed automatic transmission offers identical fuel consumption and emissions performance to the corresponding manual version. 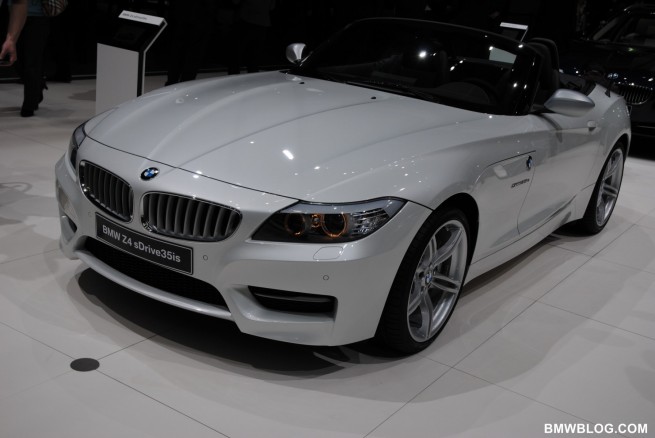 With the new Design Pure Balance package, the BMW designers have developed an elegant trim package tailored specifically to this popular roadster model. It features an extensive leather interior, with the new Cohiba Brown shade and contrasting Lotus White stitching providing attractive highlights. The package is topped off by further leather trim elements in Black, with stitching in Umbra, plus Fineline Anthracite wood and standard-fitted sports seats.

For the first time the BMW Z4 will be available in Mineral White metallic, which is offered exclusively in combination with the new interior equipment package. Alternatively, the Design Pure Balance package can also be combined with other exterior paint finishes. The new package replaces the previous “Design Pure White” package.