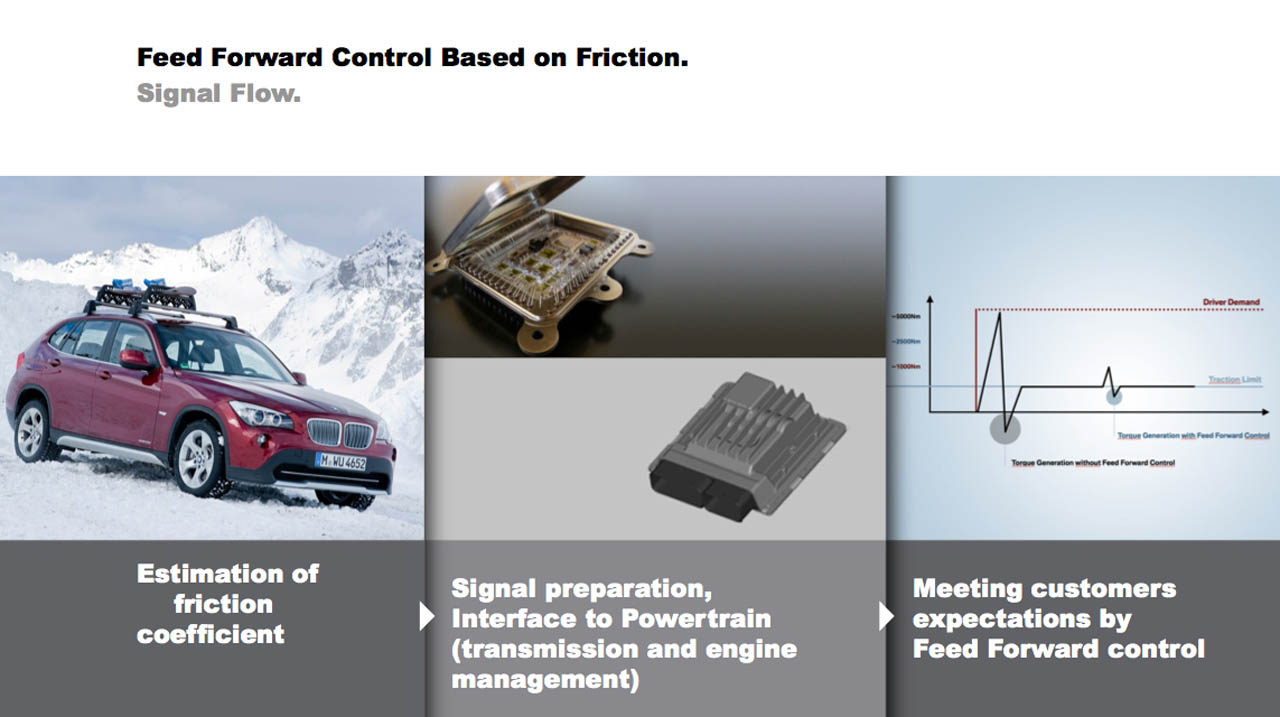 Last week, BMW held its annual Innovation Days event in Munich where BMWBLOG was present as well. One of the topics in the several workshops held throughout the day was the development of a new adaptive 8-speed transmission.

Based on the current ZF 8-speed automatic, the new transmission utilizes a wide range of technologies, GPS mapping, DSC, wireless data connectiion, front and rear-mounted cameras and radar sensors, which all together can help the gearbox adapt its shifting pattern and power delivery to accommodate the road conditions.

Autoblog illustrates an example on how this new transmission would work. 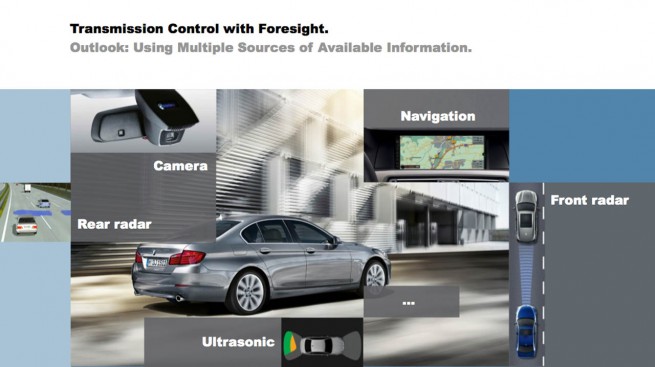 “So, let’s say you’re heading out on the road and it’s raining. The data connection pulls in the most recent weather information, the DSC takes in the coefficient of friction of the road and then restricts power to avoid wheel spin. With the integrated GPS, the system can detect the next curve, recognize you’re in Sport mode and downshift into a lower gear to perfectly suit the bend you’re about to bomb.”

Essentially, using data from different sources, the 8-speed adaptive transmission would know what gear to use in a sharp curve and what is the appropriate gear to accelerate out. BMWBLOG asked if FlexRay was necessary to handle the communication between sensors for the adaptive transmission and were told “No”, the bandwidth required to pull off the predictive/adaptive tranny was not greater than what a CAN bus can handle (about 1Mb a second).

BMW has refrained from commenting on when such technology would be available in production cars, but as we have seen in the past, the high-end BMWs tend to receive first the latest technologies; this assumption would place the 2016 BMW 7 Series as the prime candidate. 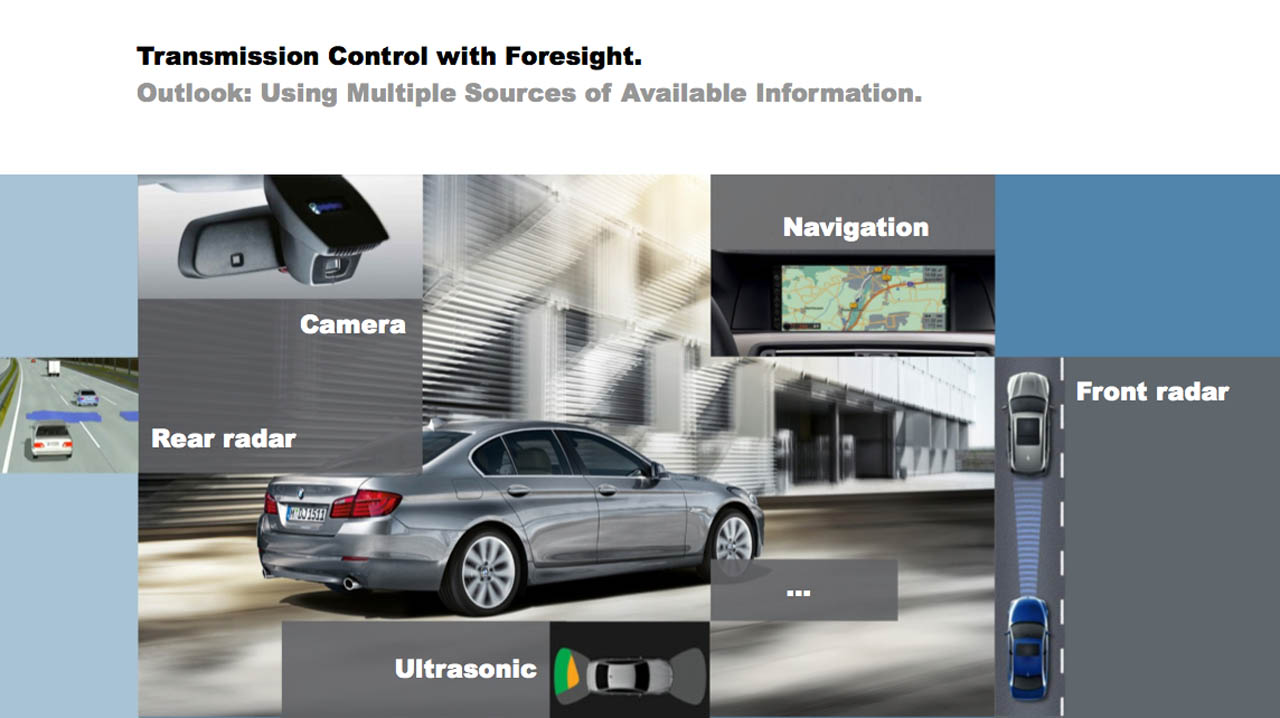 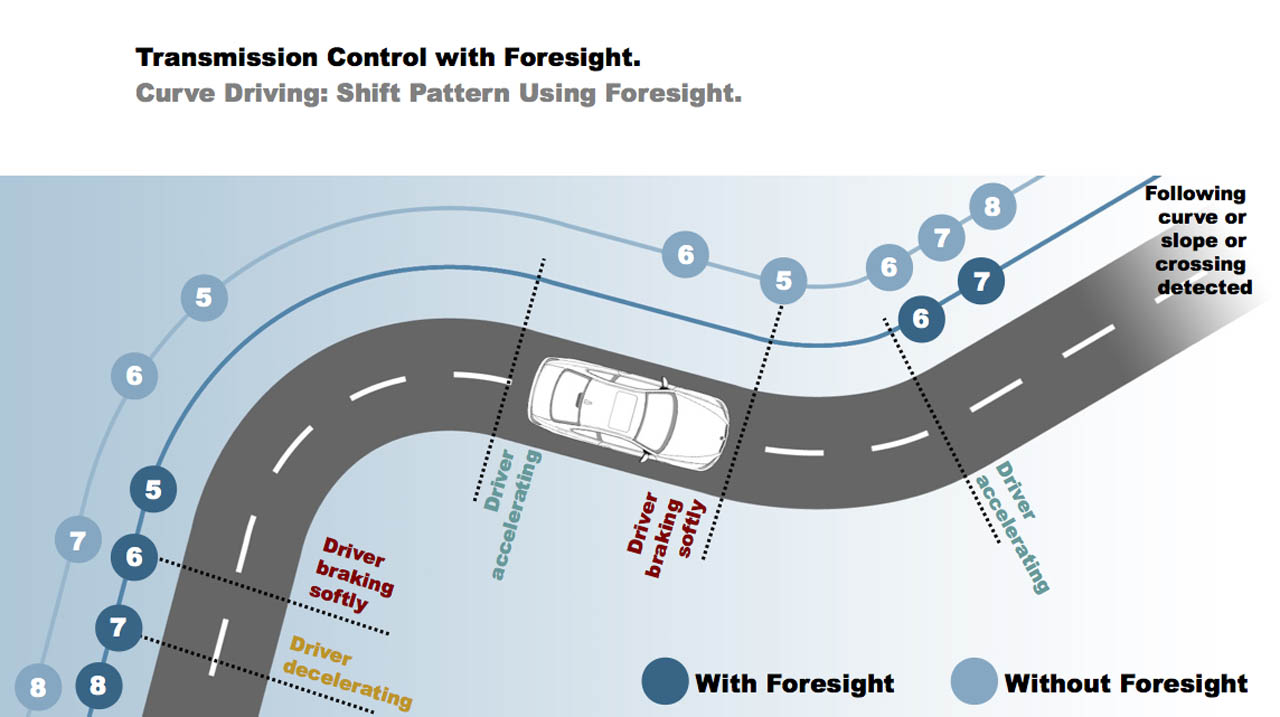 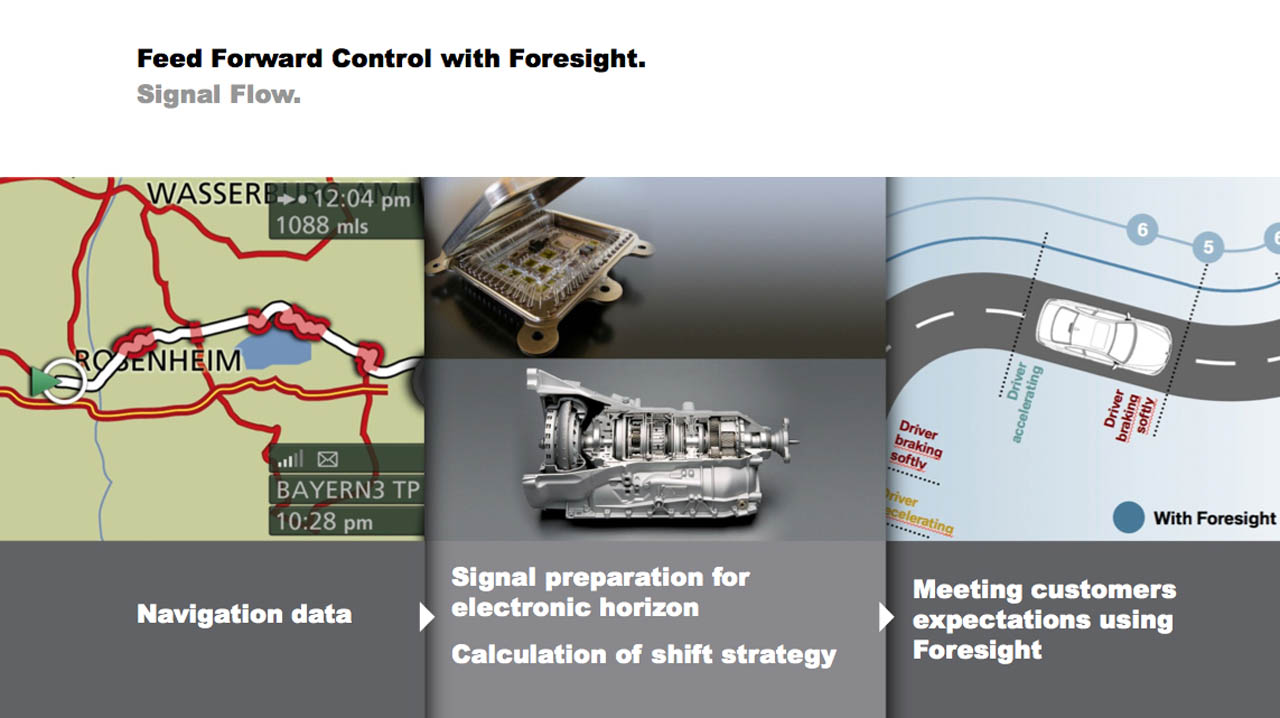 Here are some illustrations of this new technology along with the official press release from BMW.

As a result of further development there is now the possibility to adapt gearshift commands given by the transmission control system to each driving situation even more flexibly and at the same time more accurately. The anticipatory transmission control system currently in the advance development stage utilises, in addition to the driver’s intention, further information to take into consideration road surface conditions, road topology as well as the traffic situation when selecting the ideal gear. For this purpose, the transmission control system is linked to both the DSC (Dynamics Stability Control) function as well as the navigation system in the initial stage. In the configuration levels that follow, a link-up with the cameras utilised for the driver assistance systems or radar and additional sensors respectively is under consideration.

The data provided by the DSC sensors pertaining to the road surface friction coefficient help the system particularly in the case of low friction coefficients to prepare optimally for the typical control intervention during the acceleration phase that follows. Using the data provided by the navigation system, it is possible to determine the radius of a bend long before it is approached. Based on this information the transmission control system then determines with even greater accuracy the gear required for a smooth driving manoeuvre and confident acceleration out of the bend. Moreover, using information provided by cameras and radar sensors and pertaining to the traffic situation ahead of the vehicle, it will in future be possible to determine for example the required amount of deceleration and adapt the drive management to each specific situation.

In practice and thanks to this anticipatory control system, the automatic transmission adapts remarkably accurately to the situation-related requirements and demands of the driver. As a result of the complexity of the factors taken into consideration by the control system, the automatic transmission selects the appropriate gear similarly as foresighted as an experienced driver using a manual gearbox. It assists the driver with fast and appropriate response, which immediately leads to an increase in driving pleasure and optimised efficiency. Hence, the interaction between driver and vehicle reaches a new dimension.